It’s a growing epidemic in our country.

We all used to be safe but now when it comes to beer, some of us are an endangered species, not to mention the butt of many jokes…. 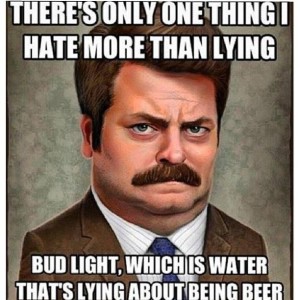 Ha ha…good one but its not the only one—there are thousands.

What is the deal with our country’s growing population of beer snobs?

When did ordering a Bud Light turn into a misdemeanor?

Many of my best friends call it “swill” or tell me I need to move on from my high school beer??

Haters…and by the way my high school beer was Busch and Natural Light so I think I have matured….anyway.

Listen Bud Light has served me well for years but lately its critics have tested my loyalty.

I recently ordered one at a middle of the road establishment– not even your fancy smancy local brewery.

“Ma”am could I have a Bud Light please?”

The waitress quickly passes on the condescending smirk and even more condescending remark “Sir you sure that’s what you want?” and precedes to show me the list of “the real beers” you know those Craft Beers with the cute names like “Shock Top.”

Hey I don’t judge you Pale Ale and Red Neckar Amble Ale lovers—can’t we all just get along?

I actually come to the dark side every now and then but usually just give me a Bud Light and I’m good.

Go easy on us low end bottom of the barrel Beer lovers—trush me Craft Beer Nation–we are just as happy.

Singing the Bud Light Blues—the lead track in another Naborhood LP—see I went old school there just like my beer—-as usual thanks for stopping by.

POWER OF THE PRESEASON: The 50th NFL season is about to start and yes I’m glad Tom Brady stuck to his guns and yes I will say for the 50th time Roger Goodell should be fired but I don’t want to keep railing on Deflategate—the Commish has wasted enough of our time. 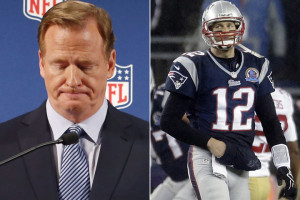 Many things in the NFL are broken but the schedule is just right—-16 games is enough and I think you need all four preseason games to give guys a fair shot at making an NFL roster—-its something many Head Coaches will tell you too—the evaluation process often comes down to how these late round draft picks and street free agents do in the last preseason game.

With 90 players on the preseason roster and 37 of them not making each NFL team—those guys need all the snaps they can get to impress the coaches, especially when you consider many of them have to share time with the starters in at least half the games.

Yeah I’m good if you only want to play the big names in one game, maybe two and its CRAZY the league charges regular season admission for a subpar product but that’s another issue for another day.

You see guys make teams based on their play in practice and games every year—great great stories every August. Trimming the schedule would hurt those underdogs and in the end hurt a league which has grown in popularity because of so many of those success stories.

HARD KNOCKS: Speaking of the preseason—yeah I want the real stuff to kick off but that means its always the end of the best reality show on TV–HBO’s Hard Knocks. This year’s version surrounded the Houston Texans who were built for this. Head Coach Bill O’Brien was fantastic and JJ Watt was as good on camera as he is knocking around opposing offenses. 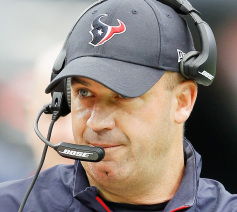 Last year’s version with the Falcons was awful and boring—-good to see the Texans bring Hard Knocks back where it belongs. The only other year it was better was with Rex Ryan and the Jets—but O’Brien gave them a run for their money—you never want this show to end!

TEBOW TEASER: While Hard Knocks is gone, so it appears is one of the league’s most polarizing stars. Tebow time seems to have run out of it in the NFL.  Talk about the ultimate tease—Tebow plays great in the preseason and on the eve of final cuts, Philly cuts his competition in fellow 3rd string QB Matt Barkley only to cut Tebow a few days later? Who saw that sequence coming? 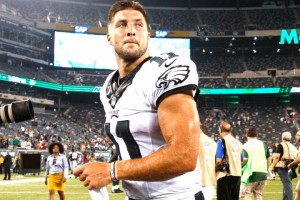 I still don’t get how in this day and age of mediocre QB play around the league that there isn’t a place for the former Gator but when the two most creative minds in the game in Chip Kelly and Bill Belichick can’t find a spot for you–it looks like Timmy is back on the SEC Network.

Will always wonder if he would have tried Tight End or maybe a few years ago the CFL or if he had picked Jacksonville over the Jets how things may be different today?

HOLD YOUR HORSES: If Tebow didn’t get teased enough—the first week of college football often teases us the most. Its hard to gauge USF when they are blowing out FAMU, how good is FSU’s newbie Everett Golston when he is matched up against Texas St ?? and then you have the Gators?

I easy to be optimistic about Jim McElwain who already carries himself on the sidelines, with his players and especially with the media like a head coach–quite the contrast from his predecessor. 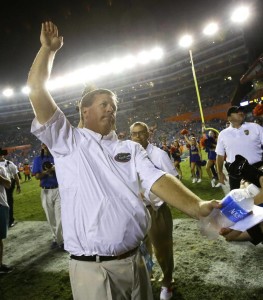 Now the Gator cynics will point to Will Muschamp winning his first game last season 65-0 against cupcake Eastern Michigan last year after the Mc Attack devoured its cupcake in New Mexico State 61-13 but this Gator program has a different feel especially offensively.

I go back to Florida’s win in the Birmingham Bowl which exploited Muschamp for not using many weapons like Brandon Powell and Adam Lane—another example of his terrible offense judgement. The carryover was nice for the Gators who are now more Fun and Gun and less Run and Done.

While Treon Harris was more than solid—I think Will Grier is the long term answer but its still very early. McElwain will open the playbook but the bigger question can that young Florida offensive line open holes against SEC offenses?

Let’s hold our horses—-the Gates are just getting out of the gates.

POWER OF PEYTON: Say what you want about Peyton Manning—he can’t win the big one, could never beat the Gators but is there a better sports pitchman?  Ever? I say no. 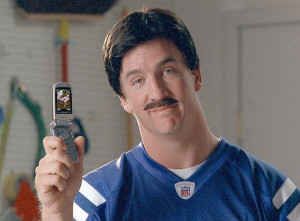 The guy was money on Saturday Night Live and take away those lame Papa John’s ads and I love all of his commercials. From “Cut that meat” to the Nationwide “Chicken Parm it tastes so good“–I appreciate the future Hall of Famer for putting himself out there.

COLBERT DEBUT: I swore I was gonna DVR the first episode of Stephen Colbert’s Late Show debut but I couldn’t help myself and then I started watching and laughing and then found myself watching the whole inaugural show.

I’ll miss David Letterman but it was time for him to leave—now late night will be as competitive as ever.

I love Jimmy Fallon, respect Jimmy Kimmel but Colbert brings a whole different dynamic to Late Night–these guys pushing each other every night is gonna make for some great TV.

Donald Trump finally has someone to put him in his place—Colbert’s skit with the Donald and Oreos was great stuff—I can’t wait to see what’s next!

NOBODY ASKED ME….BUT: Its hard to believe Steve Spurrier’s debut in Gainesville was 25 years ago. It was my senior year at Florida but I won’t remember his debut for football—-the whole campus was simply shocked and scared to death by the Gainesville Murders which took the lives of five UF students.

I’ll never forget being at the Florida bookstore with my girlfriend at the time when a scared student confided to us that he lived next door to one of the victims and had “heard loud noises all night.”

Everyone on campus was scared and it was hard to trust anybody. I loved with four other guys and we all slept with baseball bats and golf clubs.

Hard to believe it was 25 years ago but I hope 25 years later no campus has to go through such a terrible experience again not to mention the parents and family members–what a tragedy.

EXTRA POINT: Is Serena Williams the best athlete of THIS century?