Two areas of my life I try to steer clear of in this forum. They are both personal, private and many times polarizing.  I respect the fact everyone has the right to believe what they want. It often makes me uncomfortable to have others push their opinions on to me, so I don’t want to be a hypocrite.

The exception to this rule seems to be the ever growing National Anthem protests. I have really tried to sit back the past few days and objectively take in both sides, read a lot and gather as many perspectives as I can. 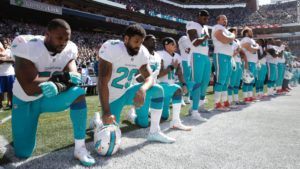 At the end of the day here goes—

Whatever your political persuasion is and whatever your opinion of the last four presidents was–can you imagine Obama, Bush, Clinton or Bush calling NFL players “sons of bitches”?! The reaction would be off the charts but it appears we hold our current president to a lower standard which is disappointing.

Many are asking NFL players to respect the Flag and the Anthem while the leader of our country couldn’t be more disrespectful—talk about a double standard. 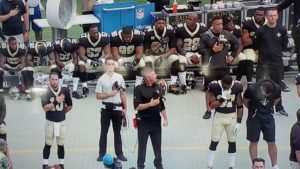 I agree wholeheartedly with what Saints Head Coach Sean Payton said after Sunday’s game where nine of his players sat out the Anthem. He supported their actions but couldn’t support our Commander In Chief.

“I am disappointed in the comments that were made,” Payton said.  “I think we need a little bit more wisdom in that office. That’s being a little blunt but that’s how I feel. I want that guy to be one of the smarter guys in the room and it seems like every time he’s opening his mouth, it’s something that is dividing our country and not pulling us together.”

I couldn’t have said it better—I want my president to lead on this issue not instigate it further. I want him to be a man of class and dignity not one who is causing more division in our country.

As I am packing for a trip to London to cover an NFL game this weekend, I wonder what the Brits must think of us along with everybody else around the world these days?  Sure they may wonder why NFL players can’t stand for the anthem but I would think beyond that they have to wonder why in the world our President is acting this way? and why we continue to support it?

Instead of this being a defining moment for Trump, he once again drops the ball. Others haven’t…..

I like how the Saints and Falcons all held hands before a Monday Night game last year. I love how the Cowboys led by owner Jerry Jones knelt together and then stood together for the Anthem before their last game. 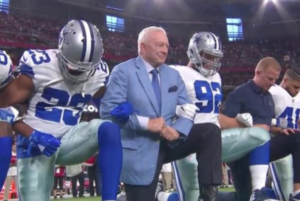 During these times we need respect and we need class—and we need our president to acquire both in a hurry.

I’m just hoping we can all agree–we expect more from our leader. Our country certainly deserves better.

Your Anthem Aftermath –the first stop around what usually is a more happy go lucky Naborhood–as always thanks for stopping by.

COLLINSWORTH HATERS?: Speaking of the NFL, former player turned broadcaster Chris Collinsworth is considered by his peers as not only the best color analyst in the game but arguably the best of all time.

If you check out Twitter on Sunday Nights though—it’s a far different story.

Collinsworth does his job and that means he doesn’t hold back which many people have a problem with. The most recent example is telling a National Audience that President Trump should apologize for his recent polarizing comments. 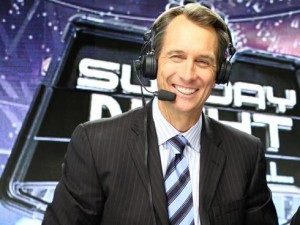 It sent the Social Media world into a Tizzy. It made me respect him even more.

Full disclosure, Collinsworth and I went to the same high school and college but the only interaction I’ve ever had with him is when we shared an elevator for 5 minutes where we talked about our hometown of Titusville, FL about five years ago.

The former Bengals Wide Receiver is not only smart but he takes his craft seriously. He studies the game like nobody else and if you really pay attention to his broadcasts, Collinsworth has an uncanny knack for seeing a play unfold. You learn something from him.

While Jon Gruden is funnier and approaches the game differently, I’ve always respected the fact Collinsworth isn’t afraid to criticize players and tell it like it is.

It seems many can’t handle the truth, but the truth is you should stop hating on Collinsworth and appreciate the fact he’s the best analyst out there.

DUMBEST RULE IN FOOTBALL: There are many things in football, I would like to see reversed. I  would love the NFL to adopt the same overtime as the college kiddos, it would be fun to make every team go for two rather than kick an extra point but the biggest rule change needed is the abandonment of any team losing possession if you’re player loses the ball when it hits the pylon or at the goal line? 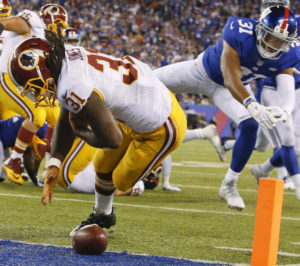 First off, the other team shouldn’t benefit from not doing anything. They didn’t force a turnover, they didn’t make a touchdown saving play–essentially this is a penalty for a player often going the extra mile and coming up short.

The answer and compromise is not placing the ball back at the one yard line but instead putting it at the 10 yard line. I have heard some on my side say it should return to the original line of scrimmage from the previous play–but I think that’s too harsh too.

The 10 yard line is the right answer—I know this rule has effected every team in the land–so let’s help us all out here?!

DWIGHT’S PLIGHT: I really believe the majority of athletes are good people but of course we have our exceptions. Some are bad teammates, some are reckless off the playing field and some are just plain self-absorbed. It seems Dwight Howard has been all of the above.

So I found it interesting seeing him on the recent cover of Sports Illustrated with the caption, “What I’ve been through, I don’t want anybody else to go through.” My first reaction was I wonder if there is a backstory of why what was once a bigger rising star than Lebron when he was in Orlando has fallen out of favor in the last five years? 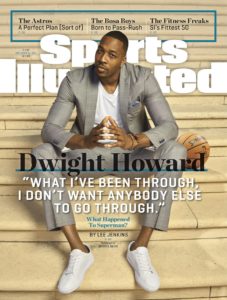 I kept reading and reading and all I discovered is this is exactly why people have a problem with professional athletes.  Howard is the perfect example of an entitled athlete whose selfish behavior finally caught up with him.

Reading the article, I kept thinking everybody has made mistakes, I’m all for second chances but there was never really any excuse for Howard having five kids out of wedlock with wait for it…five different mothers? How appropriate was this cover back during those days? Howard came into the league a very religious young man but the more we got to know him, the more we discovered what a fraud he turned out to be. 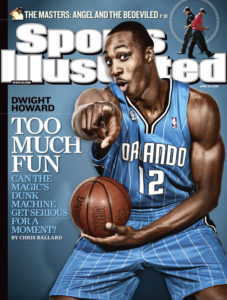 As the cover read back then “Too much Fun” yep–that seemed to be the problem over the downward spiral of a career full of great potential.

Howard didn’t suffer from depression, didn’t have to deal with much off the court despite a family who took advantage of him—let’s face it most athletes deal with that. The article in a nutshell was just a lot of excuses for his behavior.

Sorry Dwight—I don’t feel sorry for you—-you were handed everything and made a lot of bad choices for a long time—now its time to grow up. Most people do so before they reach their thirties. Maybe consult Alex Rodriguez who seems to be making quite the career rebound these days.

NOBODY ASKED ME, BUT….. Before the Anthem explosion, I was gonna lead my blog with this topic but so much has happened since.

You know growing up in Florida we take a lot of things for granted—space shuttles flying over us, trips to Disney World and then you have those constant hurricane warnings.

I admit to being one of those guys, for years thinkin,  “Those Hurricanes won’t hit me, they always threaten but they usually are just much ado about nothing.”

The recent impact of Hurricane Irma left me feeling lucky and served as a wake up call. My city of Tampa has been extreme fortunate for over a hundred years now while it seems the rest of the state has taken it’s turn at getting hit hard. 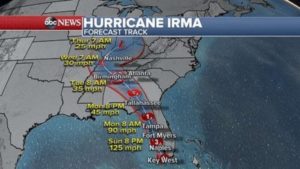 I woke up the Saturday before Irma hit Tampa ready to jump on a plane to Minneapolis to cover Monday Night Football between the Vikings and Saints only to see the radar have Irma coming right at my city and surrounding areas—no way I could leave my two daughters, so I stayed home and was glad I did even though we all ended up OK.

The storm eventually veered east and weakened considerably where we all appreciated our good luck but it was a reality check of how bad things could be the next time if the next one was stronger and hit us straight on.

I never even lost power where my brother in Tallahassee and my sister in Atlanta did–these things are so random and unpredictable.

Lesson learned as I won’t be taking these warnings for granted moving forward and will evacuate if it’s anywhere close the next time.

I no longer will be “one of those guys.” Thanks Irma.

EXTRA POINT: Good news is on the way folks—after a hiatus, Curb Your Enthusiasm is back in business in October—needed relief after a stormy month of September on many fronts.