Its becoming a measuring stick of how old we are…..

When did you get your first cell phone?

I remember getting mine in the late nineties when I was just over……30?! Will never forget the work issued phone sitting on my desk  at the TV station I was working for in Jacksonville—my life has never quite been the same since.

Amazing what a difference 14 years can make as these days the kiddos want them earlier and earlier. Trust me– as I see it first hand having two growing daughters who are now clamoring for them like they used to ask for a dog. 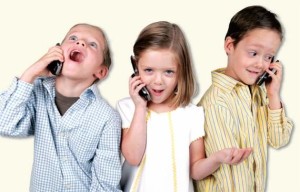 I can’t even imagine having social media or camera phones when I was in high school. Would have been fun but extremely dangerous given I was hardly a choir boy.

So how old should you be to take ownership of your own cellular device?  Its something we have wrestled with for awhile and while my oldest seems to be the last girl in her class to get one, I’m comfortable waiting until this Christmas when she is only a few cell minutes shy of her teenage years.

I still think its too early but don’t want to hold her back and keep her from interacting with her friends. Its crazy but that’s the way the kids roll these days and the old man finally has given in…..heaven help me when the boys start calling.

Phoning it in, the first stop in this week’s dial around the Naborhood…..as always thanks for stopping by.

VOICE OF FERGUSON: I have never cared  if athletes weigh in on current events or hot topics. Many wanted Michael Jordan or Tiger Woods to use their platforms for those reasons—but I just wanted them to play basketball and golf. Let’s face it, many athletes don’t even know who the Vice President is, but just like any profession, many are well informed.

Take Saints veteran Tight End Benjamin Watson who is one of the brightest athletes I have ever covered. He’s smart, eloquent and lately has proven to be quite thoughtful, well read–not to mention an outstanding writer. His heartfelt essay on the fallout from the recent violence in Ferguson, Mo made quite the impression as his Facebook post is approaching a million “likes” and gave him a platform he’s certainly made the most of speaking on several networks the past few weeks. 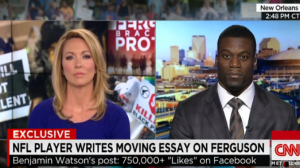 What made Watson’s essay unique was the African American football player tried to look at the issue from both sides instead of taking a narrow approach. He was sensitive expressing his own fear on how this will impact himself and his family. Watson a devout Christian also mixed in his religious beliefs noting Ferguson is rooted not in “a skin problem” but in a “sin” problem whose solution is a robust faith in Christianity.

Whether you agree with his full essay is one thing but I applaud him for putting himself out there. Athletes don’t have to do this, but you have to give credit to those that try. Reading his sensitive and descriptive account regarding the killing of 18-year-old Michael Brown and the St. Louis County grand jury’s decision not to indict police Officer Darren Wilson in connection with his death was refreshing and quite frankly extremely rare….

SEC/FSU CRITICS: Full disclosure—I hated the BCS, love the new playoff format (even though I would prefer eight teams). I also am tired of people being jealous of the SEC—c’mon folks, name another conference that could rip off seven straight national titles? Sure the league is down this year but nearly every school save Miss St and Ole Miss lost their veteran starting quarterback and the SEC West would still run with anybody in the country. Yeah…anybody!

Sure the ACC had a field day against the SEC East but the East is awful. Would like to see a round robin ACC/SEC West showdown and let’s see how that shakes out. I’ll bet West cellar dweller Arkansas would give any of them a game.

WIth that said, I think the ACC’s lone SEC Team, FSU is getting beat up for no reason. One great thing about the new college playoff system is its accountability. If we had the BCS, no doubt FSU would be number one every week but now the committee is really hammering home who you play and how bad you should beat your opponent. 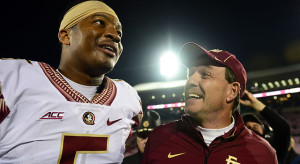 Which is good but when it comes to the Noles….they’ve taken things too far.

Still, FSU hasn’t lost yet and that surely should count for something. I’ll take them over Oregon, TCU and yes Miss St, Ole Miss, Baylor and definitely Ohio St—sliding by shouldn’t be this big of an  issue.

I still think Alabama should be Number one because of who they have played and how they have beaten their opponents but FSU should be a solid number two, not a team that falls in the rankings every week. Its hard to repeat as National Champ as you lose players and see others get fat and happy. This team hasn’t looked good but they win and I understand why all my Seminole friends are frustrated. Jimbo Fisher may wind up using this all as a positive “Noles against the World” rally cry—we shall see. Crazy thing about the Noles—wouldn’t surprise me if they win it all and I wouldn’t be shocked if they lost the ACC Championship—has been that kind of year.

MCGATOR: His last name begins with an M and has eight letters but that seems to be the only thing McElwain has in common with Muschamp. Florida’s pool of coaching candidates didn’t feature any sexy names like Urban Meyer but Athletic Director Jeremy Foley may have finally found the man who can save the Gators’ once mighty football program. 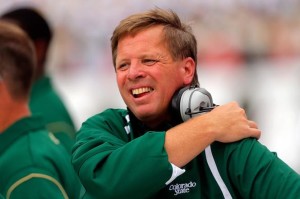 McElwain is everything Muschamp and Zook were not—-he has head coaching experience and is an offensive guy who can light the scoreboard up and you would think that would be huge in recruiting. The Gators haven’t had a good QB since Tebow and really a skill player who puts any fear in you since Percy Harvin??

From talking to my friends from Alabama, McElwain is comfortable with the media and learning under Nick Saban doesn’t hurt the background check. McElwain has an offensive mindset like Lane Kiffin except he’s polished and he’s a people person—two things you need to be a quality SEC Head Coach. I like the call by Foley, it was under the radar and once again outside the box which is how he usually rolls.

ST VINCENT: You know there are some actors or musicians that you would buy or watch anything they churn out. Bill Murray definitely falls into that category for me. His best movies are his old ones but he still makes me laugh so I was looking forward to seeing his latest release—another low budget flick, St Vincent. 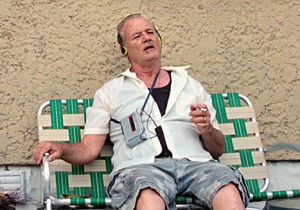 Murray plays a washed out and angry old veteran who befriends a little boy who moves in next door. Classic Murray in this one where it was a solid movie—not great yet not awful. Don’t pay for it at a theatre but it would be a good rental—make sure you stick around for the credits which feature some classic Murray ad libbing with the help of Bob Dylan. There’s nobody like him.

NOBODY ASKED ME, BUT….Thanksgiving is history but I give the Turkey award to the members of the media who put up with Seattle’s petulant running back Marshawn Lynch. Lynch isn’t a big fan of the media and was fined 100,00 by the NFL for not talking one week and preceded to give a string of about 10 one word answers the next week–lame…. 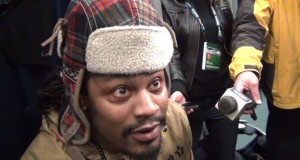 First off, I don’t think the NFL should fine players for not talking to the media—especially 100,000? Players have done far worse and been fined far less. Secondly, if you are in a media scrum after a game and a player is making a mockery of you by giving successive one word answers—have some respect for yourself and your profession and collectively walk way.

If the player isn’t gonna respect your job, no need to respect him.

EXTRA POINT: Don’t get this Black Friday nonsense…glad its on the down swing.