Change is always tough. Tougher for some more than others, but it affects everyone including those pro athletes.

Covering the Saints vs Niners on Sunday I saw a play that made me feel for both teams. San Francisco linebacker Ahmad Brooks sack of Drew Brees and subsequent personal foul flag changed the tone of the game leaving San Francisco and most everyone outside of the Who Dat Nation wondering what has happened to the game of football?

First off, by the rulebook the call was correct and was backed up by every officiating expert I saw from each network but there lies the controversy.

I felt for Brooks who seemingly was doing everything he’s been taught since Pee Wee Football—go make a play. In this post concussion lawsuit NFL, the players have to change their mindset though and that’s gonna take some time. It would be like telling pitchers they can’t throw inside anymore or hockey players to stop forechecking. This stuff just doesn’t happen overnight.

I understand the frustration of NFL defenders who have seen their right to defend stripped bit by bit each year and concurrently seen the record book bashed more and more by professional offenses. But we know more now about safety and its time to adjust. Still—I think sometimes we have taken things too far and maybe let’s meet halfway—Sunday’s hit was a good example of that.

Changing your ways my first take in our stroll around the Naborhood–as usual appreciate you stopping by!

JFK ANNIVERSARY: We’re approaching the 50th anniversary of the assassination of President Kennedy. I wasn’t alive but it seems everybody who was remembers exactly where they were. The only two things I can compare it two in my lifetime are 911 and the Challenger explosion in January of 1986 during my senior year of high school– just miles away at Astronaut High in Titusville.

Unlike 911 and the Challenger, the assassination to this day still has many searching for closure.. According to Time Magazine back in 2001 81% of those polled believe some sort of conspiracy took place. Recently, according to an AP Poll the number of skeptics dropped to 60%–it will be interesting to see what the percentage will be 10 years from now.

I have read a lot on the subject over the years and sure the Warren Commission wasn’t nearly as thorough as it should have been and yes JFK had plenty of enemies in the military, the CIA and the MOB—but why 50 years later have we no real proof it was anybody besides Lee Harvey Oswald?  Respected journalist Bob Woodward said over the years many people have approached him with a number of conspiracy theories, but each one was never backed up. Secretary of State John Kerry has said he rejects the official history of the assassination but wouldn’t go into details on why? It seems it never quite adds up, maybe one day it will– but you would think at some point in the last 50 years if there was another explanation, we would have had one by now?

COACHING HOT SEATS: OK—how about this scenario—the coach has suffered a prolonged losing streak, has disappointed its fan base with substandard expectations while enduring an unhealthy share of injuries and inexperience at the QB position. Let’t face it–I could be talking about Will Muschamp or Greg Schiano right? 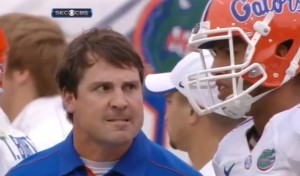 Here is the thing–I think the Head Gator and the Head Bucco should BOTH keep their jobs and get at least one more season to right the ship. Granted, Muschamp has more of a case then Schiano. He won 11 games last year and was the SEC Coach of the year. But Schiano has had more distractions and there is no way he should be blamed for Josh Freeman‘s free fall, or the MRSA mess.

I have always believed in Schiano more than most and look at Carolina Panthers coach Ron Rivera as the perfect case study.  In his first two years in Charlotte, Rivera was 13-19 and people were calling for his job. This year he has constructed the NFL’s best defense and got Cam Newton back on track where Carolina has won six straight and may be the most dangerous team in the league—patience is sometimes virtuous when it comes to that coaching hot seat.

As for Muschamp, he surely isn’t the most lovable coach but I think he can recruit and coach defense—but his offense has never been good and I don’t see any good QB’s in his future. The good news for him–next year in the SEC East–the likes of Georgia and South Carolina both lose their veteran signal callers as well. I’m not sure one more year will save Muschamp’s job but he’s done enough to get a mulligan.

DREADLOCK DRAMA: It seemed to only be a matter of time. I’ve always wondered how Major League Baseball has never suffered more life threatening injuries with its fans as baseballs fly all over the crowd at high rates of speed. Flirting with disaster would also apply to those NFL players who take the field with dreadlocks hanging ripe for opposing defenses.

Well, Sunday we had a tipping point in Jacksonville where Jags defensive end Jason Babin came out of a pile with a tackle along with a few dreadlocks off the head of Arizona running back Andre Ellington. Pulling someone’s hair is perfectly within the NFL rules as Babin emerged from the pile like a scene out of Braveheart where he showed no remorse, “Choice, decisions, consequences,” Babin said. “When you play hard and fast its anything you can grab.”

Ellington for the record said he didn’t feel a thing at the time but did get his locks back after the game. I’ve talked to players in the past who don the dreads and they say its worth the risk. Maybe they can roll the dice but it seems they are playing with fire–unfortunately this time somebody got burned. Dreadful!

KNIGHT MOVES: OK, its high time we give the largest school in Florida the respect it deserves. Yeah how about those UCF Knights (see I didn’t say Golden??) They are the poster child of why we should have a bigger college playoff because who knows how much damage they could cause. They took South Carolina to the wire and gave Louisville its only loss. I know they could beat Florida, think they could beat Miami too and lord knows what they will do to USF?? Remember the days when they wanted to run George O’Leary out of town?? Those days are over–UCF is now 18th in the latest BCS rankings but I think they’re better than that–wouldn’t it be great to have them in a 12 team playoff against the likes of Michigan St or UCLA—ok I’m late to the party but is their room on the Knights bandwag0n???

SIR PAUL: Its funny how many of us question how much we’ve done in our lives or what our impact has been? If you find yourself in that category, this should make you feel a bit more normal as Paul McCartney has the same feelings even given his track record of records. In a recent interview with Rolling Stone, Sir Paul laments on his legacy which interestingly enough, he doesn’t have a good grip on. ” Let’s face it, I’m cool. Everyone tells me I am. I’ve got a track record. You’d think I’d stop wondering whether anything I do is any good.” Unbelievable….

McCartney adds another problem he has is not enjoying his accomplishments where he has no awards room at home but likes what he does so much, he really doesn’t take time to reflect. ” I want to think I’m great, because when the hell am I going to do, wait till I die and go, “Oh ?#!!??, I should have taken a week.” McCartney said. I thought his comments were revealing and made me like him more. Its great to love what you do and in doing so it seems to make you look forward and not look back a lot—a pretty healthy existence.

TALES FROM THE ROAD: Recently, I was in New York City—the city that never sleeps and apparently never holds back even when it comes to the most blunt Do Not Disturb ” sign of all time in the Hudson Hotel in Manhattan 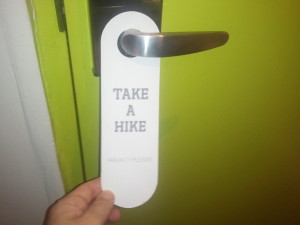 Solid work huh?? The hotel was very environmentally sound where it also gave me something I’ve never seen before in this: 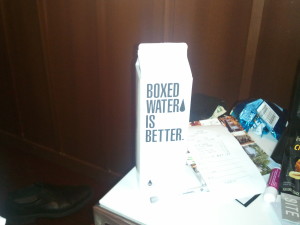 Yeah it wasn’t bad either—-not sure when these will show up at your local 7-Eleven though??

NOBODY ASKED ME BUT: I have great respect for the first family of football, those Mannings. I can’t imagine there will ever be another family like them again but recently I couldn’t avoid them. In an unbelievable three day run of Manning’s, I first went to Oxford and had to drive 18 miles an hour on campus thanks to the local ode to good ole number 18 Archie Manning. 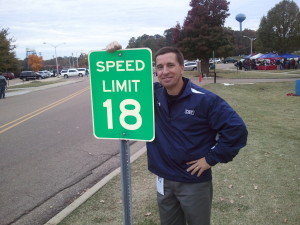 The next day I’m covering a Saints game and who is inducted into their ring of honor—yeah Archie Manning. I thought that was pretty coincidental but then apparently like life—all good Manning Moments come in threes. I jump on my flight and who is sitting right next to me—none other than Cooper Manning the oldest of the three boys. What a run–but not nearly as good as the run this family continues to be on.

EXTRA POINT: What is the deal with the letter M and SEC Quarterbacks??? Its apparently a prerequisite—you have Manziel, Murray Mettenburger, McCarron, even new Auburn QB Nick Marshall chimes in,but we’re not done. Florida has two in Murphy and Mornhinweg and Missouri likes the letter M so much it put Matty Mauk on the field this year…..