After writing my last entry about the first month of this football season , I felt the immediate need for a shower. A lot of tough topics to digest.

The NFL is lacking a lot of things lately: credibility, accountability but there’s also another vacancy—how bout a good ole fashioned postgame tirade—I can’t remember the last one.

I can’t recall a set of NFL Head Coaches who are this robotic. Save Rex Ryan and Pete Carroll most head hanchos treat press conferences like a dentist appointment.

Do you know the difference between a Joe Philbin and a Ken Whisenhunt??

When is the last time we saw a head coach go all Denny Green, Mike Ditka or Herm Edwards on us?

Maybe its social media, camera phones or maybe they saw the drabness work for boring Bill Belichick and they’ve all followed suit.

I know all of these coaches are as competitive as anyone but I rarely see it during their meetings with the media.

The king of the postgame tirade was former Saints/Colts Head Coach Jim Mora. His legendary one liners like “Playoffs?!” to “you think you know but you will never know,” to of course his greatest hit “Diddly Poo” to describe his team’s effort were legendary and quite frankly pretty damn refreshing.

Recently I sat next to Mora in the press box at Jerry World in Dallas where we were watching the Saints get blasted by the Cowboys. The coach, now 80 years of age, certainly hasn’t lost his fastball where he was armed with loads of great stories and conversation—talking to him was the highlight of my night.

Now I’m sure it was tough to cover Mora back in his prime where he admitted to me he’s now embarrassed by all of his rants which his grandkids now get to see on Youtube and in your occasional beer commercial.

He joked about the number of assistant coaches who are in the league now. We both counted them on the roster and he said he probably had HALF that many back in his day.

I begged him to get on Twitter and he laughed at me. I could have talked to him for hours.

My point–we need more Jim Mora’s in our world these days because currently we don’t have anything that comes close. While he was brutally blunt and never dull—he was also effective winning titles in the USFL and leading a pair of NFL franchises to the playoffs. Being bold and brass doesn’t mean you can’t win.

Character counts and characters are what we remember . I’ll take bravado over boredom anytime…any place.

Missing Coaching Characters our first offering in a busy run through the Naborhood.–as always, thanks for stopping by.

JETER PARTY POOPERS: How great is Derek Jeter? I can speak for Yankee Haters everywhere, because I am one of them—we still appreciated him even though we can’t stand his team.

When it comes to Jeter–why can’t we just enjoy his goodbye party ? Sure a lot of it was overblown, the patches on the Yankee jerseys were excessive but the Yankee shortstop was of the rare players that deserves to be celebrated.

I’ve never been a big fan of Keith Olbermann who pontificates with the best of them and must always let you know he’s a walking baseball encyclopedia. He reminds me of every “know it al”l I’ve ever met in my life. Well sometimes the know it alls, don’t…know…all.

I thought Olbermann’s typical over the top recent ESPN rant where he had to let us all know that Jeter isn’t the greatest Yankee of all time and exploited all of his flaws was off base and poorly timed.

Of course Jeter isn’t the best Yankee of all time and I don’t even feel he’s on their Mt Rushmore ( I’d go with Ruth, Gehrig, DiMaggio and Mantle) but that’s not the point.

Can’t we just enjoy good news in sports??! Jeter certainly gives us that. We finally have a great story to talk about and many in the media like Olbertmann had to be as negative about it as many of the NFL headlines of late.

Jeter like he always does, got the last laugh. First, the remarkable walkoff hit in his storybook Yankee Stadium swan song to go along with an RBI single in the last official at bat of his career at Fenway of all places . I will remember him as the most clutch hitter of his era, a guy who had more hits than any Yankee EVER and maybe his most impressive accomplishment—he was a modern day pro athlete in the Big Apple of all places and never embarrassed his team or his family. Not once…….

Olbermann left out a whole bunch of stuff…

TOPPS CARDS: Writing this blog, I’ve appreciated many companies reaching out to me who want to team up to promote their products. Recently though I had what you call a layup…… 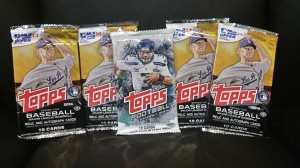 In a word: Outstanding!

I may be 46 years old but I’ll never grow tired of collecting baseball cards. Its funny the business has taken huge hits over the years but one company who has always been the standard bearer has been Topps. I still have boxes and boxes in my attic which include unopened boxes from the early eighties (yes I admit the packs still have gum in them.)

These days no gum—Topps is much more creative. In their latest 2014 foil packs they have several new age features. The back of the cards give new age sabermetrics stats and include a new line of Saber Stars. Topps doesn’t ignore the ole school collectors as this current rendition pays homage to the 1989 edition by putting the latest stars back in that brand;

Yeah makes me feel old that their “ole school” is when I was in college but Topps never disappoints. Unlike the 80’s they now give us rare autographed cards and game worn jerseys—can’t get enough of this stuff.

Its amazing how long Topps has been on Top. Getting these cards and watching the Royals win its first playoff game in 29 years brought back memories of when you knew all the players on all the teams—because they stayed on those teams for years and because of that you collected all of their baseball cards.

Its something I can share with my kids, unfortunately its a lot harder to keep up with the players these days, the only constant has been Topps.

RYDER WIMPS: Is there a softer group of athletes than pro golfers? Its one thing that you have to be deathly quiet every time they tee if up (nobody shuts up when big leagers try to hit a 95 mph fastball) then every two years we have to see them lose the Ryder cup and act like a bunch of whining babies about it???

The Euros have dominated the Red White and Blue like the Globetrotters handle the Washington Generals having now claimed six victories in their last seven meetings and eight of their last ten.

Along with losing, the other constant has been the whining. Phil Mickelson immediately started blaming captain Tom Watson . Before Watson, Captain Corey Pavin was criticized by the pompous PGA losers.  Watson was ripped by Lefty and several other for  sitting the red-hot duo of Jordan Spieth and Patrick Reed on Friday afternoon and failing to communicate his intentions to the RC rookies.)

Hey Ryder Whiners how about you start making better shots  instead of taking shots at your captain—pretty convenient.

Tom Watson put it best saying its the players that win not the captains who lose, “The bottom line is they kicked our butts. they were better players this week.” Exactly.

JUNK FOOD: Not sure the amount of likes on Facebook  is the best indication of what is best but if you believe in such things, thanks to my friends at USA Today here are the most “liked” Fast Food restaurants:

I can’t argue with the top three. I always wondered though if In N Out Burger would lose popularity if it was more widely distributed (mostly a west coast thing) and if Chick Fil A was open on Sundays—would it be as packed everywhere I see one. The answer….probably.

EARLY CHRISTMAS GIFT? : My friends at Sports Illustrated have really broadened their base the past few years. Along with their popular magazine, they have produced several great kids books of late which would make excellent Holiday gifts. Their latest, “All New Access—Your Behind the  Scenes Pass to the Coolest Things in Sports” is a great read with plenty of visual on the many facets of sports you don’t often get to see. It shows kids the background of every major sport from the way players train, to their equipment to an inside look at some of the great national landmarks like the Baseball Hall of Fame among many others. I highly recommend it.

NOBODY ASKED ME, BUT: My Mom would have turned 73 this month and its still hard to fathom that she’s not here to celebrate it. She passed over five years ago and I miss her more each year. She loved giving birthday parties more than anyone I ever met but never made a big deal of her own. I think of how much she would have enjoyed seeing both of my daughters mature the past five years and how many times I think about reaching for the phone, only to know I can’t call her anymore remains painful. 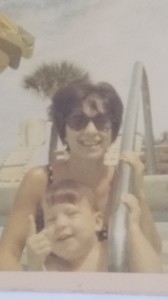 I do believe she’s with me everyday and feel she has helped create opportunities in my life. You never lose your Mom even though she passes, I feel her spirit daily and always have this thought that she can see everything I do, which motivates me to be a better person.

I’ve never met anyone like her, she was such a special influence in my life—I miss our talks where she always gave the best advice.

So Happy Birthday Mom, you may not be able to receive our gifts but always know how much all of your gifts still live in our lives every day.

EXTRA POINT: What is going on in music these days? Tom Petty, Prince, John Mellencamp and Bob Seger are releasing new music this month. Is this 2014 or 1984….?

NOBODY ASKED ME, BUT…: