Happy New Year (yeah just snuck that in there)

What’s the deadline to say that—just the month of January?

Anyway, it’s a New Year but it’s the same ole same ole in some ways. Take this year’s Super Bowl where it seems if you’re not born and bred in New England—you’re rooting for the Eagles.

A big reason, many are growing tired of this guy…. 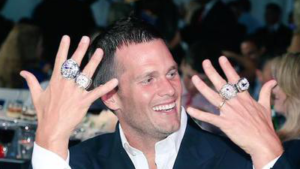 I don’t get it….I’ve always appreciated Tom Brady. I can’t say I don’t understand his critics because it’s actually easy to.

Many are just plain jealous…..

Brady doesn’t need me to defend him, but I feel compelled to and defending him is easy.

Full disclosure, I’m not a Patriots fan, have no dog in the fight and the only time I have actually ran into Brady (besides interviewing him) is when we ran into each other. He tripped over me in the hallway of Gillette Stadium a few years back after a Pats/Saints preseason game. (For the record, he profusely apologized and couldn’t have been nicer)

So why the hate? Is it because he makes avocado Ice Cream for dessert?

I say get over it.

As the cliche goes–don’t hate, appreciate. Appreciate the fact that we’re watching the best QB…EVER.  I thought Brady was the GOAT before his Super comeback over the Falcons last season. If he’s anything, Brady is greedy. He wants more than five Super Bowl rings—what’s wrong with that?

I understand disliking teams for polarizing personalities, obnoxious coaches or sometimes irritating fan bases but to hate because of too much winning? C’mon you gotta give credit where it’s due.

They say everybody loves a winner, well in this country we have two BIG exceptions: 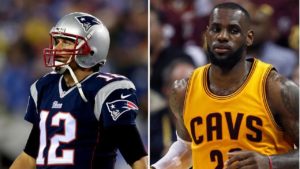 How many times do you hear it? I hear it daily.

I can’t stand Brady or Lebron James , they drive me crazy. Frankly–that drives me crazy.

Both have “never” been in trouble with the law, are seemingly good family men and in this crazy social media/camera phone age–haven’t embarrassed themselves. Quite the trifecta….

The main problem is they are great. Great too much, win too much, lose too little.

Brady and Lebron  are two of the best athletes our country has ever produced but they are not beloved—why? They are too successful, too often.

I wish I had those kind of issues.

You wonder if some of our favorite athletes over the years, Michael Jordan, Mickey Mantle or Joe Montana would have been sliced and diced in today’s times like Brady and Lebron have been—we’ll never know.

Instead of wishing bad things on successful people –why can’t we appreciate the greatness. Tom Brady’s story is inspiring, it’s not like he’s been handed everything. Brady never had the supporting cast of a Montana, for crying out loud was the 199th pick of the 2000 draft, and was even benched several times at Michigan—it’s an amazing story.

Why the hate? Well it just happens to rhyme with Brady’s biggest scandal.

Don’t get me started on Deflategate—some NFL players who have been convicted of assault have incurred lesser suspensions compared to a legendary quarterback who “allegedly” aired out his footballs. It just kills me.

So while many say “anybody but the Patriots” on Super Sunday, don’t put me in that camp. Usually if I don’t care, I’ll pull for the underdog but not this time. I don’t care and I still want another front row seat to history and when you’re talking football history nobody makes it better than the Patriots often vilified quarterback.

Why? Because he wins too much….because he won’t stop winning and maybe just maybe could keep winning till he’s 45?

Doesn’t make any sense to me.

Defending Tom Terrific, the first stop in another sprint around the Naborhood. As usual, thanks for stopping by.

WHO WILL REPLACE GRUDEN? I’m not surprised Jon Gruden is back into coaching, the bigger surprise is that it took over a decade for him to make the move. One of my favorite Sports Bars in this country is Ricky’s Sports Theatre and Grill in Oakland, which has always seemed to know it too. Ever since the Raiders traded Gruden to the Bucs, Ricky’s loved Gruden so much they kept a parking space “with his name still on it” out front with the hopes he would come back one day. 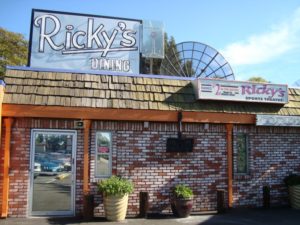 Congrats Ricky’s you get your man back for two years until the team moves to Vegas. Hopefully Ricky’s will franchise there too?!

One of Gruden’s sons told me three years ago, his Dad would return to coaching and he was a prophet— but who should replace today’s version of John Madden (yes Ricky’s amazingly still has a spot open for that ex-Raider too)?

I say the move is easy, I just don’t know if my choice is interested?  Sure Matt Hasselbeck did a solid job in his debut at the Pro Bowl but I want a guy who will make me laugh like Gruden and Madden, give me some solid analysis but most of all not be afraid to criticize—I got our guy. 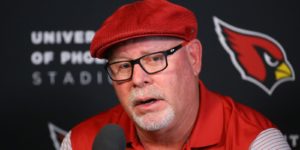 Give me 65 year old former Arizona Head Coach Bruce Arians. He’s funny, smart and not afraid to throw out an opinion. Right after Arians resigned with the Cardinals, he threw out this doozy– “Nick Saban always had interest in the New York Giants job.” Now Arians didn’t say Saban would take it– but he wasn’t scared to give us that kind of insight.

Arians was a good football coach, the players loved him and I know the Monday Night audience would too. Gruden was really good and if he falls on his face in Oakland would always have a spot waiting for him but I would love to see if ESPN and Arians could iron this out.

Maybe Arians doesn’t want it–he’s been coaching since the mid-seventies with more tours around this country than Springsteen—but I think he’s better than Hasselbeck and even my runner up for the job… Peyton Manning.

DYNAMIC DUO: I just started getting into Netflix (that’s a story for another blog) where it’s amazing how many great shows they churn out seemingly daily.

The other day I checked out the first episode of, ” My Next Guest Needs No Introduction with David Letterman.” It’s clear Dave is tired of traveling the world and is ready to get back to work—the King of Late Night has missed the action.

I’m not so sure about his first guest–who seems quite comfortable being out of the spotlight.

It was none other than Barack Obama who sat down with Letterman where the two were so at ease it was as if the cameras and big studio audience weren’t there. I really enjoyed the interview for one big reason, how about this—they rarely talked politics. In fact, they didn’t mention the word “Trump” once.

We could use more interviews like this one not because of Trump because it was a chance to get to know Obama more on several fronts—-the self proclaimed “clueless father” talked about not being able to put a lamp together as he was emotional leaving  his oldest daughter at college. The ex-President told stories of how it hurt never to have gotten to know his father and passed on some great and often humorous examples of how his Mom raised him along with his grandparents.

Letterman’s did a nice job mixing in Obama’s thoughts on civil rights as he cut several times to his walk across Selma’s famous Edmund Pettus bridge with Congressman John Lewis who provided remarkable insight to his struggles and his respect for Obama.

No politics—just three men talking about life, family and how to make this country better—-sign me up for more Dave.

SUPER SUNDAY TREAT: An estimated 111 million people tuned into the Super Bowl last year and many people threw viewing parties for the year’s most anticipated game. Buying football décor for the party is a must especially plastic cups that have a team’s name and logo on them. This year upgrade your drinkware options with Toast’s new leather pint glass cuffs that are hand-crafted from real leather and come wrapped around a premium quality 16 oz. pint glass. The high-quality cuffs come in 10 striking colors ranging from Moscow Mule to Scotch and can be customized with football related designs or sayings. 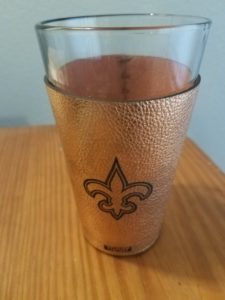 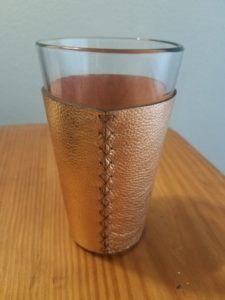 If you would like one for your Super Sunday party or next football gathering—log on to: toastmade.com

NOBODY ASKED ME, BUT: Gotta admit for awhile Super Bowls were Super Stinkers—but the biggest game has been good lately– real good. For some perspective, my friends at the personal-finance website WalletHub recently released an interesting study on 2018’s Best & Worst Cities for Football Fans.

To determine the best places for loving America’s No. 1 sport, WalletHub compared more than 240 U.S. cities with at least one college or professional football team based on 21 key metrics. The data set ranges from number of NFL and college football teams to average ticket prices.

Here are their interesting findings:

To view the full report and your city’s rank, please visit: https://wallethub.com/edu/best-worst-cities-for-football-fans/9691/

EXTRA EXTRA POINT: It’s sad when covering the Pro Bowl–the highlight is watching Drew Brees’ three sons play real tackle football on the sidelines. I know it’s a tired argument but there has to be a better way to play this game–really bad stuff.

Until Next Blog,
Mike Nabors