It’s pathetic but it was my reality.

I felt like I said goodbye to a good friend recently…..my long time cellphone.

Even though we never talked, he or she…ok “it” was the model eavesdropper—hearing every one of my conversations the past four plus years while riding shotgun for countless sporting and family adventures.

It was my favorite cellphone of all time—the original Samsung which I purchased in 2010. I loved the phone so much, I swore I would never get rid of it as I couldn’t imagine one better. Kind of like riding that car even though it has over 200,ooo miles on it??! 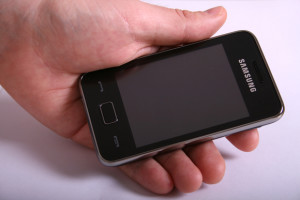 I remember what a big deal it was to get my first cellphone at my job back in the nineties but I never had a wingman like this one.

It took great pictures of my kiddos, fired up quick emails and sped up my personal and work life greatly.

Then of course like our favorite car or house….it started breaking down.

The breakup was tough, I didn’t want to let go but I had to. My new phone is much better, much faster but it will never be like the old one. How long had I hung on to my ole friend? It was a Galaxy and my new phone is a Galaxy…..5!

Its stupid and silly how dependent we are on our cellphones — but the truth is they do so many things these days.

Still not sure how we survived the pay phone era but just like no TV in the fifties—its all we knew?  My nine year old daughter took the old Galaxy into her room, so it has a home with Curious George and the Barbies, so there is a happy ending.

Phoning in another trip around the Naborhood where we touch on a great loss and many great people—as always hanks for stopping by.

ROBIN WILLIAMS: What a terrible year 2014 has been in terms of losing such well rounded and respected performers. First Philip Seymour Hoffman than Harold Ramis and now the legendary Robin Williams.

Besides Tom Hanks, I can’t think of a better all around talent in my generation than Williams who could play Mork,Popeye and then some of the best dramatic roles of the past 25 years. Sure he was extremely funny and an unparalleled ad-libber (see Good Morning Vietnam—which hardly had a script for many of his infamous scenes) but what I take most from this special man was his emotional and inspirational roles such as his work in  Good Will Hunting and  Dead Poet’s Society which might be my favorite movie…ever. 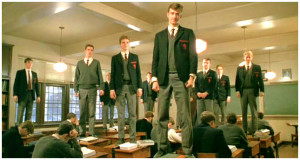 Its amazing somebody so full of humor and happiness could be so troubled and tortured on the inside. It shows you really have to pay attention to every sign whether its your co-worker or a good friend. Everybody is fighting something in this life, even those with seemingly everything going for them. Many cases are much more complicated as suicides outnumber homicides in our country—mental illness is a serious and growing problem.

There will never be another Robin Williams—from Mrs Doubtfire to Dr Sean Maguire to John Keating—its a shame we’ve seen his last performance—the only good thing is we can pass down his work to the next generation who will surely appreciate it such a rare talent.

WEST VIRGINIA MOUNTAIN MAMA: I have spent the better part of the last month in West Virginia. The thought of that a few months ago gave me images of toothless natives and pickup trucks. The state gets stereotyped for being backward and barren but I have learned a much different side.

I cover the New Orleans Saints who pitched their training camp tent at the luxurious Greenbrier resort which amazingly in the span of 90 days built a state of the art facility and three football fields. Yes this picture on the left was all dirt…just 90 days ago. 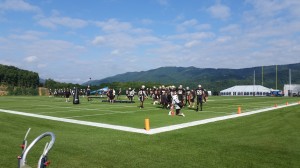 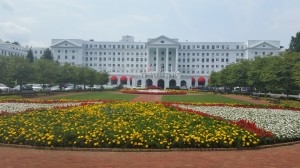 Sure The Greenbrier is nice but I’ve never been a big “country club” guy so I have fallen in love with the resort’s next door neighbor, the city of Lewisburg, West Virginia. It only has around 3800 citizens and has been voted “Best Small City in America” by several different surveys over the years. Per capita, mighty Lewisburg must have the best set of restaurants in the country. We heard about a few heading in, but after three weeks in —I am here to report, I amazingly wasn’t served a bad meal. If you’re ever in the area check out the Stardust Cafe—order the Pork Shank—you won’t regret it. 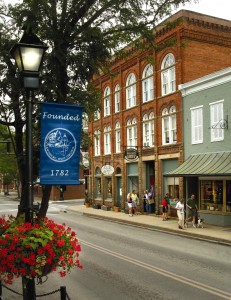 I would highly recommend this place for your next vacation. You are in the middle of nowhere but with the Allegheny Mountains as a backdrop, The Greenbrier next door and everything from hiking to kayaking to golf and swimming–West Virgina, Mountain Mama I enjoyed you and promise to be back—soon and will never judge you again!

HALL OF FAMERS: Its come to this in baseball—I can identify more with the Hall of Fame class than this year’s group of All Stars?! While  I couldn’t recognize probably half or maybe more than half of the players on this years’ All Star team, I am now old enough to have closely followed the careers of each group of Hall of Fame inductees. Back in the 80’s and early nineties, there wasn’t an All Star I wouldn’t recognize–times are a changin. 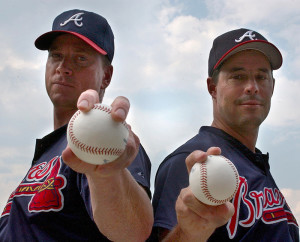 Its made me feel old watching Tom Glavine and Greg Maddux gain induction into Cooperstown as I covered both in their hey day with the Braves. I remember Glavine was always the stoic yet smart competitor while Maddux was the most unconventional. I recall interviewing him after games where he would have his shirt off and display somewhat of a gut—no way he used steroids!

In this day and age of bullpens by committee—you wonder if these two are the last of the 300 game winners? I would say so but am still amazed those Braves teams only won a single World Series.

Speaking of the Braves, was also a fan of  Hall of Famer Joe Torre when he was the Bravos manager back in the 80’s and got to know him when I worked with him in his time in St Louis where he remembered my name after our initial meeting and treated everyone with class. I even finished runner up to him in the Spring Training NCAA Pool back in 1992.Even though I hate the Yankees, it was nice to see Torre get  his due eventually in the Bronx where it was great to see him head into Cooperstown.

CLASSY BROOKS: As for the Football Hall of Fame, it gets worse in the age department as every year the inductees are guys younger than me!! Gotta mention how happy I am for Derrick Brooks whom I have never heard one bad comment from any fan nor any member of the media—that is quite rare. 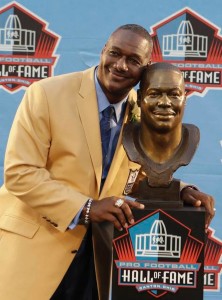 I remember covering Brooks out of Florida State at the Senior Bowl when scouts wondered if he was “too small” to be a linebacker in the NFL —-how did that work out? Whether its after a bad loss or a great win or whether I requested something from Brooks for my business—he always has time. He is the anti-Warren Sapp—both Hall of Fame player and person.

SAM SILENCE: Speaking of football, it was refreshing to see Michael Sam’s first game go under the radar. Not sure what the “distractions” Tony Dungy was talking about?? I was on hand for the his first game against the Saints and there wasn’t any sort of media buzz where it was nice that he played well and that was the only story.

I was disappointed hearing Dungy’s comments given the fact he has been discriminated against and has tried to convince others not to judge the likes of Michael Vick? How do you defend that Michael and shield yourself from the other Michael?

Here’s hoping Sam makes the Rams because he earns it not because he’s gay. Big picture —let’s hope its no longer a story and kudos to Michael for how he has handled himself during this whole process, a lot better than some men who have many more years in the league.

NOBODY ASKED ME BUT….As a kid, I loved getting autographs in Spring Training. My Dad encouraged me and patiently waited for me in all kinds of locations. Not sure if my daughters will ever love it like I did but it was fun watching them try after a recent Bucs Training Camp practice. I gotta give the Buccos credit, they made it easy on my ladies by keeping the adults on the sidelines.  Good move—should be for the kids, not the collectors. They made sure not only Head Coach Lovie Smith was available but several of the teams best players. 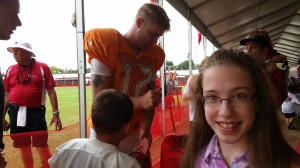 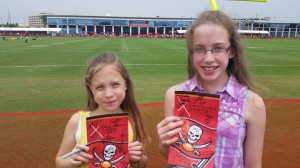 Funny, besides Lovie, my kids really didn’t care who they got—it was the thrill of the chase. I know at Saints camp, all the players are great about signing—it seems this area of sports has progressed quite a bit even though many players are more private with the time.

While those athletes who get in trouble off the field garner most of the attention—-the majority of them are good guys and understand what their signatures mean—which is a whole lot.

EXTRA POINT: I used to say Atlanta had the worst airport in the country but upon further review and recent experience—the top honor now goes to Dulles in D.C. You can get rid of that place and ground United with it—-terrible airport and airline!