Pete Rose finally got the call to the Hall but it wasn’t Cooperstown. His recent induction was to the Ted Williams Hitters Hall of Fame inside Tropicana Field. 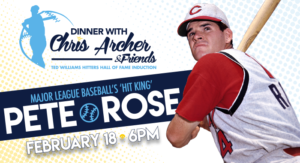 Rose adds he regrets not seeing Joe DiMaggio in person too, but his biggest regret remains the mistakes he made which have kept him out of the “other” Hall. While the Ted Williams’ Hall is nice, the Hit King remains hopeful he can make it to Cooperstown one day.

“You can’t control it and I can’t get on a TV station and complain about it because I’m the one who screwed that up, if I hadn’t screwed that up I’d be in the Hall of Fame. But like everybody else in this country we live in, you just hope for a second chance, I won’t need a third chance.”

The skeptics will say Rose has to be contrite after repeatedly lying about betting on baseball, but Rose is encouraged by slowing gaining more acceptance as seen recently from his old team which has  passed out more than one olive branch.

“I made the Reds Hall of Fame last year. I got my number retired and this year they’re doing a statue. I got a shot to make the Phillie Wall of fame ,which is in August if I win the vote. I’m getting old but a lot of good things are happening, I hope to stick around and see them.”

Rose turns 76 in April and by getting older thinks more and more about the possibility of not being alive if he should get the call to the Hall—what  keeps him going is knowing his family will always have his back.

Rose said this tongue and cheek yet understands while he has more than his share of critics, he also owns an impressive not to mention loyal fan base.  This was seen at the Ted Williams’ induction where Rose’s autograph line dwarfed all of his peers. This scene is commonplace all around the country.  So how often do fans approach him on a daily basis about getting into the Hall?

“Me more than anyone else because I have a job at the Malls of Vegas where four and a half hours a day, twenty days a month I sign autographs. It’s like playing a doubleheader everyday and I never make an out” 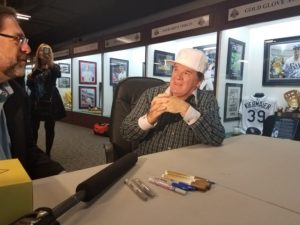 Rose is quick with a one liner which has helped him in his new career as a Fox TV Analyst joining an unlikely combo of himself ,Alex Rodriguez and Frank Thomas . The trio have become a big hit.

“It’s fun. What we do is kind of neat for me because you go in the green room and you sit and watch every game that’s being played and then you go on TV and talk about what you just watched, it’s fun”

He’s back in the game but the game never left Rose who remains a big fan.

Rose says the Reds remain his favorite but the Ohio native sticks to his home state as his runner up are those Indians. He’s also amazed by the Cubs recent World Series victory. ” I actually tell Cub fans for all these years what God told the Chicago Cubs don’t do nothin till I get back, I guess he got back and we’re all still here because they won and they deserved it, they earned it”

He has his favorite teams but what about the current players? Do any of them stand out and pass Rose’s standards in terms of all out hustle?  “One of my favorite players today no one ever talks about is (Cardinals third baseman) Matt Carpenter. Man he can hit, he’s a great two strike hitter.”

Rose is still passionate about those who play with his trademark heart and hustle where he singles out Miguel Cabrera as the games’ best hitter but appreciates the approach of  Mike Trout, Bryce Harper along with up and comers Francisco Lindor from Cleveland and Houston’s Jose Altuve.

“Just because they don’t run to first on a base on balls don’t mean they don’t played the way I did. You should criticize players who don’t play like those guys play”

“One obligation you have as an athlete and that’s to bust your chops for two and a half hours when you’re in a baseball uniform and if you don’t, you’re cheating the fans and the one thing you can’t do in sports is cheat the fans.”

Rose admits to cheating yet still takes great pride in never cheating those who paid to see him play. He will move forward loving the game while awaiting the Hall of Fame.