Tis the Holiday Season and while many love Christmas, my two favorites precede it.

Halloween will forever be my number one–think about it—low risk, very high reward. You throw together a costume and “voila”—-you get loads of candy and how can you not love all the trick or treaters.

By the way, Halloween parties have always been the most fun.

First of all you have to admit Ham is way better than Turkey right? 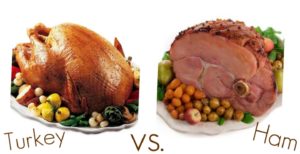 Then you get the three F’s—Food, Football and Family followed by the three L’s—Leftovers, Losing (always the Lions) and Laughter (that’s where the family comes in minus this year’s political wrestling matches)

I’m not a Scrooge but Christmas is a lot of work—Thanksgiving and Halloween are both low maintenance—no shopping lists, no tree trimming and no return trips to the Mall.

It’s a great time of year where I’m thankful for my two beautiful and intelligent girls, my great friends spread all over the country and my terrific family —Happy Thanksgiving to you all.

Giving Thanks, the first stop in another lap around the Naborhood, as always thanks for stopping by.

YO ADRIAN! I remember it like it was yesterday–my Dad took me on my first big road trip with him when I was eight years old and the highlight was catching some new boxing movie called Rocky–we both loved it.

Can you believe it, the iconic film is celebrating it’s 40th anniversary this month where even today it’s a remote dropper for me where unlike many other films—I also enjoyed many of the sequels but let’s face it the first one was the best. 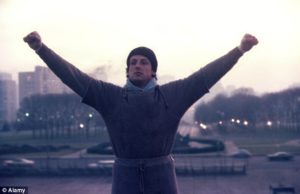 Here are some facts about Rocky you may not have known:

*The film was shot in just 28 days on a budget just over million dollars–went on to earn 225 million worldwide.

*Rocky’s dog Butkus was actually Sylvester Stallone’s dog in real life where he was so broke when he made the film, he sold Butkus only to later buy him back.

*Stallone’s famous scenes where he was punching slabs of meat took such a toll that he permanently flattened out his knuckles. 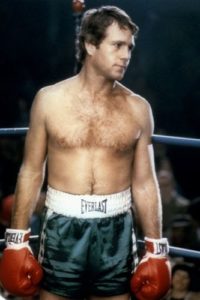 *United Artists liked Stallone’s script but wanted Ryan O’Neal, Robert Redford, James Caan or Burt Reynolds to play Rocky. Stallone insisted that he wouldn’t sell the script unless he played the title role. UA relented but cut the proposed $2 million in half.

*Susan Sarandon auditioned for Adrian but was deemed too pretty for the role which was given to Talia Shire who by the way is the sister of Francis Ford Coppola. It’s rumored Cher was up for the part too. 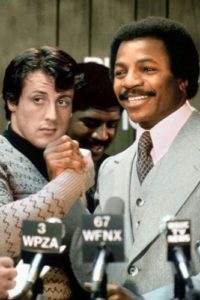 *Stallone was inspired to write the movie after seeing unheralded boxer Chuck Wepner last fifteen rounds with Muhammad Ali at the Richfield Coliseum on March 24, 1975.

So a big cheers to Rocky’s 40th birthday—the first sports movie to win an Oscar for “Best Picture” and a great Father/Son Moment back in 1976.

TOUGH GUY: While Rocky was tough, I think I found an athlete who will more than give the Italian Stallion a run for his money.

How about Columbus Blue Jackets left winger Matt Calvert who took a slapshot to the face, fell to the ice in pain yet left on his own power in the second period in a recent game against the New York Rangers.

He was just getting started….

Amazingly, 30 stitches and a period later, Calvert would not only return but would deliver a game winning wrist shot —a shorthanded goal to boot.

Here he is post game–only hockey players folks…..gotta love it. 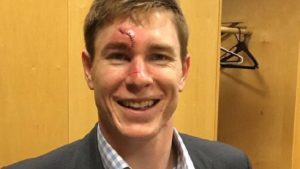 Is there any question they are the toughest athletes? Matt Calvert gives us the latest argument where unlike soccer, no flopping in this sport—not even close.

GATOR REVENGE: I couldn’t believe the outcry when it happened and still can’t a month later. Sure when Hurricane Matthew threatened to ruin LSU’s plans to play Florida in Gainesville back in October—Florida probably could have made a Sunday or Monday night game work but listening to MANY members of the LSU Media contingent you would have thought the Gators were actually hiding in the closet hoping the game would go away and never be played? I think the word was “ducked?”

I’ve frankly never seen anything quite like it—School officials calling out another university for “ducking them” and having many media members in their back pocket. 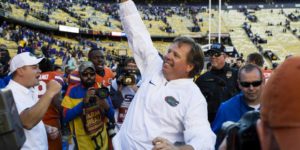 Fast forward to November where everybody(EVERYBODY) was predicting Florida albeit a banged up Gator squad would get hammered as they strolled into Tiger Stadium to meet an angry LSU team primed for revenge.

Well Florida had other plans and won a physical game with the perfect revenge–a game ending goal line stand. Arguably the biggest goal line stand in school history. While I still don’t know how great Gator Head Coach Jim McElwain will end up being in Gainesville, this was his finest hour.

“They got what they deserved,” McElwain proclaimed. Yes they did coach—“They” would be LSU officials who mistakenly called out the Florida brass who were doing their best to try and tip toe around a pending hurricane but faced a hardly objective LSU media contingent who for one weekend in October turned into the Tiger Sports Information staff….

Now instead of playing for a right to go to the Sugar Bowl, LSU and its pack of homers will be making two straight trips to Gainesville, without Leonard Fournette….

BACK OFF ROMO: I’ve never understood the constant piling on off Dallas quarterback Tony Romo. For years, he was all the Dallas Cowboys had. Sure he took some chances and cost them some games but you could make a case there wasn’t a more exciting quarterback in the NFL when Romo was healthy and at his best.

Romo in his nine years as starter averaged 26.8 touchdown passes to 12.2 interceptions a season–that is elite play folks…

Still the guy can’t win even when he’s taking the high road. With backup Dac Prescott taking Romo’s job and leading the Cowboys to an unprecedented nine wins in a row–Romo could have pouted, really could have said nothing but came out and supported the man who has taken his job. 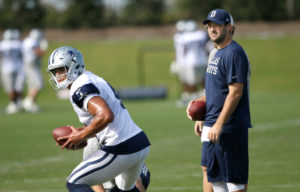 “Dak Prescott, and what he’s done, he’s earned the right to be our quarterback,” Romo said. “As hard as that is for me to say, he’s earned that right. He’s guided our team to an 8-1 record, and that’s hard to do.”

Even after saying many critics didn’t let up on Romo saying he was being self serving while others still maintain he was pouting.

I couldn’t disagree more–good for Romo for doing what many wouldn’t have–a move which took a lot of pressure off of his football team and his heir apparent.

Here’s hoping Romo lands in Denver next season where it would be nice to see him ride into the sunset like another classy veteran did a year ago.

NOBODY ASKED ME, BUT… You know sometimes we all take ourselves a little bit too seriously. Minor League Baseball isn’t meant to be too serious which is why I am going all contrarian when it comes to the new nickname of the New Orleans Triple A team which has been transformed from the Zephyrs to well this.. 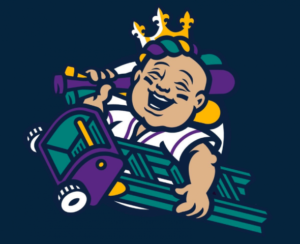 Yes we now have the New Orleans Baby Cakes folks and I love it! A nickname which is as popular as Hillary Clinton in the state of Louisiana these days.

It’s different, it’s catchy and oh baby–the logo is fantastic—I can’t wait to get the T-Shirt.

In a world where you have the Toledo Mud Hens, the Jacksonville Jumbo Shrimp , the El Paso Chihuahuas and the Montgomery Biscuits—those New Orleans Baby Cakes fit right in.

I get that the locals don’t feel the Baby Cakes stand for anything locally but the first thing I thought of us was King Cake—its just the minor league version?

EXTRA POINT: Great to see the Cubs win the World Series but in the process they eliminated any other lovable loser in American Sports. Buffalo Bills? Detroit Lions? San Diego Padres? Sorry it’s over there will never be another drought or story like the Cubbies—the bad news to a great story.