How on earth are we playing football in 2020? All the sweating, spitting, bleeding….it’s ridiculous that it’s happening.

Back in July, I thought there was no way but here we are in December (and granted it hasn’t been easy) but the games continue to kick off week after week.

In terms of sports, I think the NBA was the best with its unbreakable bubble but the NFL has been tops in terms of holding firm.

When the pandemic kicked off they didn’t flinch regarding free agency, the draft and ultimately the season kicked off right on time. Check, Check and Check! Remarkable……

But in my recent trip in Denver, I saw the NFL make it’s first big mistake—c’mon you gotta have a quarterback? 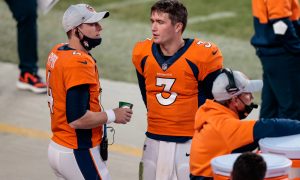 The league saw images of these Broncos quarterbacks carelessly meeting in the team facility without masks and dropped the hammer–suspending the ENTIRE depth chart? It left Denver with poor Kendall Hinton who rose from practice squad wide receiver to starting quarterback in a matter of hours. He had NEVER taken an NFL snap.

So…what is your solution smart guy? Well….how about fining all of those Broncos quarterbacks? Fining the Broncos? Taking a draft pick, multiple draft picks?

You can’t take away all of their quarterbacks?

Many of the Broncos couldn’t identify Hinton if he walked past them in the hallway without a mask–so now he is gonna be the starting quarterback? C’mon 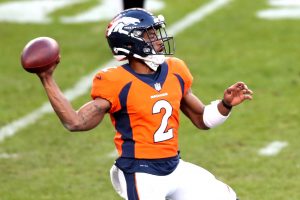 NFL protocol states if a team signs a player this season, they must wait six days to practice with their new squad—I get that—but I don’t get this. This measure by the way prevented the Broncos from signing an emergency QB—-damn it would have been fun to watch former Bronco Tim Tebow play today’s Tim Tebow in Taysom Hill???! Better than a practice squad player with absolutely no chance which equated to zero entertainment value.

This would have at least been entertaining….. 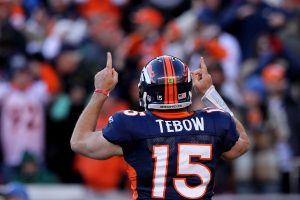 You gotta have a quarterback….

We all had days growing up when our parents would punish us for ticky tack rules but the result would be (most of the time) we wouldn’t do it again?

The NFL is hoping this is the case and you can bet the rest of the league will behave.

But it shouldn’t have ever happened—the quarterback is the most important position not only in football but in sports. It’s like taking the engine out of the car.

The NFL took the engine away not only from the Broncos but the fans or any casual observer–was the there any doubt the Saints wouldn’t win that game?

You gotta have a quarterback our leadoff hitter in another solid Naborhood lineup–as always thanks for stopping by!

IN AND OUT HYSTERIA: Watching the NFL single handedly ruin an NFL game was crazy but a close second in my recent trip to Denver is the dedication the locals had to pick up an In and Out burger.

Don’t get me wrong, I rarely eat fast food anymore but In and Out is the exception. The only thing better than their burgers …are their fries (and their shakes aren’t bad either) This place has been a west coast institution for years but is slowly making it’s way east. 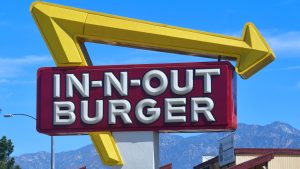 This California landmark in recent years has found its way to Las Vegas, Dallas and now Denver where the locals are showing up in droves.

Would you wait 14 hours for a hamburger? Me neither but thousand of Denvernites have and still are where I love this quote from a patient patron in the Mile High city who waited for miles just to get In and Out the most popular new place in town. “This is crazy,” Marco Cabral said in the middle of the In and Out gridlock. “We had to buy a meal to wait for a meal,” he said as he walked back to his car with a bag of Chick-fil-A in hand.

The fast food fascination is so powerful, the new Denver In and Out had to hire added security to avoid a potential burger and fries riot where check out this tweet from the local police department surrounding the grand opening on November 20th… 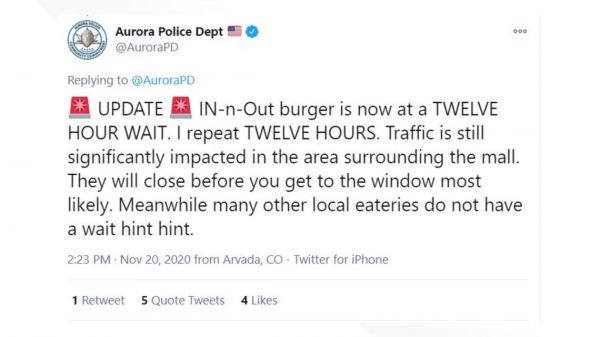 It’s a great burger but no burger is worth waiting that long for? You know how many Disney rides you could weather in 12 -14 hours?

I drove by the location on my way to the stadium and there were construction signs on the side of the road with updates on how long the In and Out waits were?

Says a lot about In and Out but what does it say about our society?

WHO’S ZOOMING WHO? In 1985 one of my favorite singers the great Aretha Franklin sang this hit about a game of flirtation of unsuspecting interests (yeah that was a Wikipedia reference??!)—35 years later the word “zoom” has taken on a whole different meaning.

Honestly how many of you heard of  “Zoom” before the pandemic? You’re not alone. 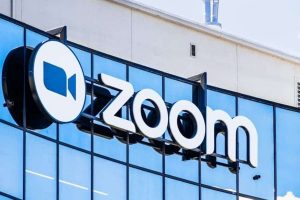 The meeting mammoth has proven to be the business behemoth of the COVID crisis where the growth of Zoom Video Communications is mind blowing. Back in March when we were just settling into the pandemic, according to Abe Smith, Zoom’s head of international, the company was assisting 200 million meeting participants a day worldwide–not bad right?

For perspective, the company only serviced 10 million just a few months earlier back in pre-pandemic December 2019 (doesn’t that seem like 10 years ago?)

Fast forward back to April, a good month into COVID-19 and  the number of daily meeting participants had climbed to 300 million according to Smith’s interview with ZDNet.

Zoom has saved my job personally where with no locker room or in person press conferences, we have learned to get creative. My postgame interviews each week look like this on the air……. 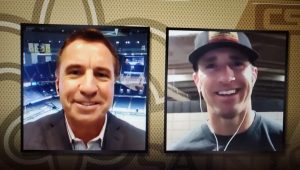 Yet here is the reality, I’m often angling my laptop in press boxes all over the country—to get the right background over my shoulder while still conducting an often 4-6 minute interview. 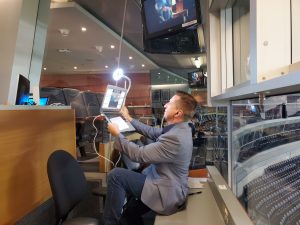 Recently, my weekly postgame interview with Saints quarterback Drew Brees was conducted via Zoom from Brees’ house. He jumped on in his kitchen and after I asked him if he wanted to do it there—quickly reconsidered and within seconds moved the Zoom interview to his living room where his wife Brittany did her best to keep the kids quiet but couldn’t stop the family dog from making a cameo at the end. 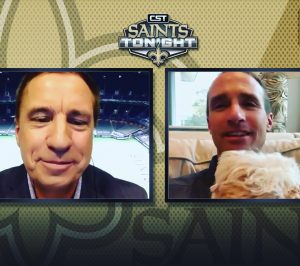 Unreal times sometimes bring moments we never would have had during the normalcy we enjoyed before 2020.

Who’s Zoomin Who? could be the number one hit for this crazy year which makes me wonder when things do get back to normal if Zoom will remain the industry standard for many? Stay Tuned.

MICHAEL J. FOX: You know there are some actors where you pretty much like everything they’re in–for me that’s Michael J. Fox. Loved Alex P. Keaton in Family Ties, thought Back to the Future was a perfect movie and he was the perfect choice to be the leading man. Thought he was great in the film, “The American President” and even enjoyed Teen Wolf ! 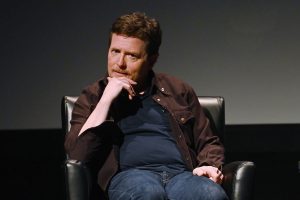 Fox amazingly has been battling Parkinson’s Disease for almost 30 years and it’s hard to believe he will turn 60 next year? It’s so sad he recently admitted that he can’t act anymore but Fox admirably still remains productive in his life. His foundation has raised a million dollars for Parkinson’s research and even though he can’t type or write just finished his fourth book, “No Time Like the Future?”

Fox laughed in an interview with Parade Magazine that many think the book is a reference to his famous movie which isn’t accurate. It’s a revealing portrayal of his life where Fox is honest admitting it’s been  far from perfect but he maintains an incredible attitude we should all appreciate. Two years ago Fox had surgery to remove a benign tumor wrapped around his spinal cord—it left him in a wheelchair where he had to learn how to walk again. 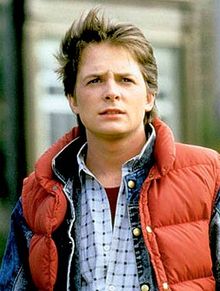 Still through it all, the accomplished actor remains grateful, “I have Parkinson’s  and a tumor and a broken arm, and I’m still lucky,” he told Parade. “It could be a lot worse.” Hearing that made me a bigger fan of the former Marty McFly—makes many of our 2020 problems seem pretty small.

NOBODY ASKED ME….BUT: Social Media is pretty insane on a lot of levels, especially Twitter where you never know what gains traction. For example, recently I was in Chicago where in the press box I usually go for the water but what did my wondering eyes see……my goodness old friend its been awhile…..?!? 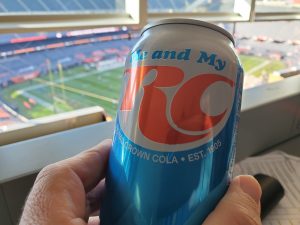 Honestly when is the last time you had one of these??

Anyway, I sent this picture into the Twitterverse and quickly huddled up with many RC Cola kindred spirits. It’s funny how this post got more attention than any interview I put out there—it seemed to strike a chord with many especially in my age group.

RC’s website says it’s sold in 67 countries and was the first to invent the diet drink? I remember it being a staple in the south where it had a long relationship with the Moon Pie but I can’t remember the last time I saw one at the grocery store or at a gas station.

To be reunited in Chicago at the Soldier Field press box? So 2020…..

EXTRA POINT: People need to lay off Tom Brady—the Bucs coaching staff and offensive line are the real problems—talk about the NFL’s biggest disappointment—I still think they make the playoff though.