We all have our own ideas.

I frankly think it’s a place better than any of us can possibly imagine.

But allow me to imagine the possibilities. Recently, I checked out a possible sneak preview where I think I officially have found heaven here on earth …. 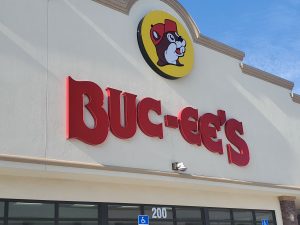 I know, let’s not cheapen heaven by comparing it to the best convenience store in world history?? Allow me to explain.
It’s rare that anything exceeds the hype. I can think of a few examples: Breaking Bad, U2 in concert, my first hot fudge sundae along with…. anything you may purchase inside this insanely great superstore…..Buc-ee’s was even better than advertised.
This place is Wawa on super steroids. 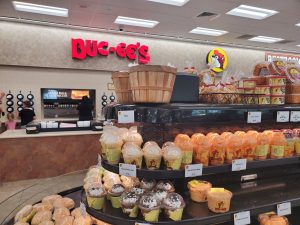 So what’s the deal? Why is Buc-ee’s so Buc-eelicious?
Let me count the ways.
First off, its selection of food, snacks, and well… more snacks is off the charts. It basically has every snack you’ve ever encountered in your life and they take many of them to the next level.
And then you have the main course…..
I’m not one to buy an entree at a convenience store, sorry but never purchased a hot dog at a 7-eleven (unless it’s the last option maybe in my college days?!) but you can buy a Buc-ees barbecue sandwich which rivals some of the best I’ve had anywhere. I’m told the breakfast menu is great too (maybe next time?)
So you have the off-the-charts selections, superior food quality and for good measure throw in the service and cleanliness. The bathrooms are not your typical rest stop variety–they are spotless??! Never thought I’d ever get this excited about clean restrooms… but it’s true.
And despite how popular this place is–there are no lines? It’s really incredible.
Throw in the fact its gas prices are the best too—it’s a win, win, win, win across the board 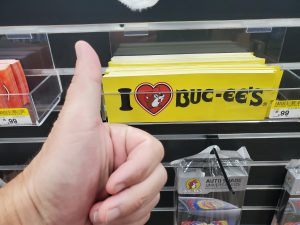 Why Buc-ees? Apparently, co-founders Don Wasek and Arch “Beaver” Aplin came up with the moniker in Clute, Texas in 1982 (the original location is still open). Aplin formed the name Buc-ee’s by combining his childhood nickname; the name of his Labrador retriever Buck and incorporated of all things (Ipana’s toothpaste’s animated mascot) the great Bucky the beaver.
Whatever works guys?
The formula definitely works as the stores gradually took off wherein 2012 Buc-ee’s opened its largest travel center in New Branfels, Texas (right outside of San Antonio). The New Braunfels location is the largest convenience store in the world at 68,000 square feet. It features 120 fueling positions, 1,000 parking spots, 64 ice freezers, 83 toilets, 31 cash registers, four ice machines, and 80 fountain dispensers. It has been rated by several as “the best restroom in America.”
Today Buc-ees has 40 locations and is expanding its wings all across the south. I’m all for expanding this budding dynasty.
Still not sure what heaven is like but I have officially found heaven on earth–I can’t wait for my next trip.
“Buc-ees Heaven.” our first of many stops in another run around the Naborhood, as always, thanks for stopping by!
MONDAY NIGHT MANNINGS: Speaking of great things, if you haven’t watched the Monday Night Manning sideshow—I highly encourage it!
I missed week one but like many of those hot Netflix shows, I heard the hype from many friends (some who weren’t football fans) and had to check it out—this is groundbreaking television. 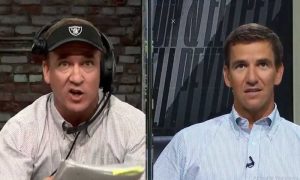 In this ever-evolving time where social media and YouTube are breaking down barriers of traditional media daily, the Mannings fall right in line. For years, the networks have pleaded with Peyton Manning to be an analyst but he wisely has taken his own path. First with Peyton’s Places, a creative series that profiled the first 100 years of the NFL, and now with an alternative broadcast of Monday Night Football.

I get that if your team is playing you click over to the main broadcast but –if you don’t care who’s playing?  This is the perfect Monday Night landing spot for a number of reasons.

Peyton brings along Eli and the two are great together. Sure it’s funny when Eli pokes at his brother’s expense in subjects like his large forehead (calling it a “five” head) but it’s deeper than that. I have never learned more about the game than listening to these two. And then you have A-Listers who join them each week? The Mannings roll out their expansive rolodex which delivers each quarter of the game.  The latest episode featured new Rams quarterback Matthew Stafford, Lebron James, Nick Saban, and Chris Long (all in one show!) It’s great on so many levels.

The ratings are showing I’m not alone as they doubled from week one to week two and are steadily on the rise. ESPN originally toyed with having one of their hosts navigate the brothers Manning but after a few rehearsals this summer wisely let them do this without any outside interference.
One of my favorite moments so far is when they brought along dad Archie right after halftime to “critique” the broadcasts. I have worked with Archie sporadically over the years and know how much he likes to needle Peyton which came across great on the air….. 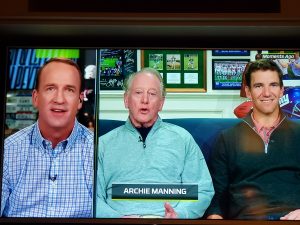 What a run for the Mannings…exceptional television—the perfect combination of entertaining and educational programming. The only problem is they’re not on every week. Only seven more games this season with the next three off, they will be missed!
NORM MACDONALD: It was shocking and very sad to see the recent passing of Norm Macdonald who had quietly been battling cancer for years. The highest tribute is the approval of the peers in your business and from every comedic corner, the salutes were thrown Norm’s way when he left us at the age of 61. Like Richard Pryor and George Carlin, Norm was a legend among comedians for the way he uniquely approached his craft.
Like them, I appreciated Norm for his fearlessness as a comic. For better and (sometimes worse) Norm didn’t care, he put himself out there whether it was speaking at a Presidential Correspondent’s Dinner, his many years on Saturday Night Live’s Weekend Update, or the many times he was a popular guest on a variety of late-night talk shows.
I was always a fan of Norm but I thought his best moment was his last appearance in the final week of David Letterman’s run on CBS. His routine here was legendary among comedians and showed off his fearless attacking of comedy which was different than most…..love every bit of this:
I will never forget watching this with my late father, especially the final month of his life when he was in the hospital. We laughed every time. Thanks, Norm for giving us so many funny moments, there was no one like you.
BEST SONGS EVER? Unlike some, I simply love lists. They are guaranteed to be controversial which makes them fun which leads me to the latest list that nobody could possibly agree on: Rolling Stone’s now updated top 500 songs of all time!
The last stab at this by the publication was 2004 but 17 years later they are at it again where the publication polled more than 250 artists, musicians, and producers along with music industry leaders and select critics and journalists. They each submitted a list of their top 50 songs.
All told 4000 songs received votes.  While the 2004 version of the list was dominated by early rock and soul, the new edition contains more hip-hop, modern country, indie rock, Latin pop, reggae, and R&B. More than half the songs here — 254 in all — weren’t present on the old list, including a third of the Top 100. The result is a more expansive, inclusive vision of pop, music that keeps rewriting its history with every beat.
Here is your revamped top ten where it’s fitting Aretha received plenty of……… 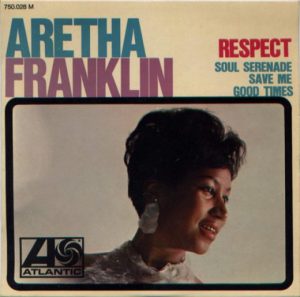 NOBODY ASKED ME, BUT.…. We see it every year, some find success others often don’t? I’m referencing those new NFL and college coaches but I have my favorite this fall. I’ll take you to Fayetteville, Arkansas where it appears the Hogs have finally got it right.
Raise your hand if you’ve heard of Sam Pittman before this month? or maybe you still haven’t heard of him?  This lifelong assistant wasn’t Arkansas’ first or second or maybe third or fourth choice but after big wins over both Texas and Texas A&M, Pittman has the Razorbacks in the top ten for the first time in nearly 10 years. 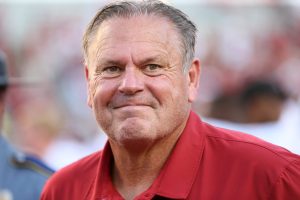 While you or I may not be familiar with Pittman, those in the know, have seen it for years. Pittman has the reputation as one of the SEC’s best recruiters most recently building and coaching up Georgia’s dominant offensive line.
Previously he was hired by former Arkansas coach Bret Bielema to be the Hogs assistant head/offensive line coach and before that was brought in by Tennessee coach Derek Dooley to man the  Vols o-line—both schools should have hired this longtime assistant–who knows where they would be today? At least Arkansas was wise enough to make the most of its mulligan.
Coaching hires are a lot like NFL draft picks–you never really know? But it’s nice to see someone who has paid their dues for so long not only get a break but thrive—-at the age of 59 Pittman is taking full advantage and it’s great to see.
EXTRA POINT: Everybody loves Ted Lasso—I really want to like it but just don’t get the hype? I” seven episodes but will keep trying……
UNTIL NEXT BLOG,
Mike Nabors
@mikenabors
PHOTO CREDITS: USA TODAY, Saturday Day Blitz, A Southern Firefly, Los Angeles Times, Stereogum and Rolling Stone