As we say so long to 2017, looking back we had to say goodbye to a wealth of personalities.

For me though, one loss hit home the most. 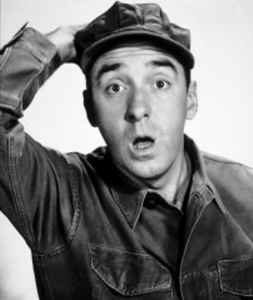 I have no proof we were related, yet no evidence we weren’t as it seemed the most famous “Nabors” on the planet was always a quick joke or one liner away.

Yes me and Jim Nabors never met but he was always close by.

His recent passing at the age of 87 left me reflecting on so many memorable moments.

Sure Jim impacted many as the iconic, “Gomer Pyle” on both the Andy Griffith Show and later, “Gomer Pyle,” but his quirky character resonated with me my whole life.

I can’t tell you the amount of people through the years instinctively called me, “Jim” because my last name is Nabors. Often I wouldn’t correct them as I knew they didn’t mean anything by it, it’s just the only Nabors they ever knew. It happened last week…..

I can’t tell you how many times I would go through security at the airport and the TSA person would say with a smile, “Are you related to Jim?” Gotta admit that one got a little old.

I can’t tell you how many times different people in my life would throw out the nickname “Gomer”  the most notable memory was while in college, one of my professors affectionately labeled me, “Gomes.” 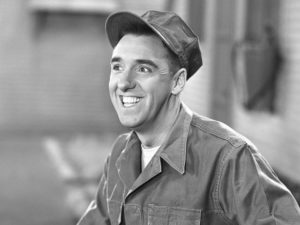 You google “Nabors” and Jim is the Alpha Dog–there isn’t even a close second. Yes there are many famous Smiths, Johnsons, Williams and Browns but for the Nabors clan–Gomer Pyle was our main man.

How did I hear of his passing? I was at a Tampa Bay Bucs practice when one of the team’s public relations guys asked me if we were related before breaking the news? Amazing….

My grandfather who was a quiet man surprised many of us while on a vacation decades ago in Hawaii when he tried to reach out to Jim who resided there much of his life but didn’t have any luck. I would have loved to have been a fly on the wall for that conversation!

My first job was in Tuscaloosa, Alabama–Jim’s home state where he was born in Sylacauga and Andy Griffth was king. I heard a lot of Jim Nabors jabs there.

Its amazing the staying power of the legendary Jim Nabors but it’s interesting the generation gap. Often, while working in newsrooms over the years, I would take a poll on who has heard of him and who hadn’t?  Likely if you’re 30 or under you didn’t raise your hand.

I guess that means moving forward less TSA agents will be cracking jokes and more and more the “Gomerisms” will fade when all is said and done, I salute the great Jim Nabors.

I never met you but felt your impact much of my life—a testament to your life where you certainly left your mark.

Saying goodbye to Cousin Jim, the first stop in your latest jog around the Naborhood. As usual, thanks for stopping by.

URBAN/JIMBO Growing up a fan of the Florida Gators I would always smile at how spoiled the “Gator Nation” grew by the decade. When I loved the Gators as a kid, we were just happy to beat Georgia and Florida State every once in a while–winning the SEC? Not a chance.

Then you had the Spurrier Era where the fanbase “expected” to win the SEC. Those fans graduated to the the Meyer/Tebow Gator Fans who then expected a National Title every year. 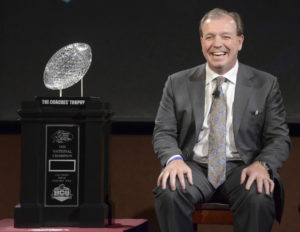 Some Fan bases are bratty and unappreciative and I can now say both Florida and Florida State share in the blame. I know Jimbo Fisher could have been more graceful leaving Tallahassee but I find it laughable how many of my Seminole friends are so anti-Jimbo these days–the same ones who swore by him for so many years.

Yes it reminds me of how many Gator fans all of a sudden started hating Urban Meyer when he left the Gators for “health reasons” only to quickly take a job with ESPN and then Ohio State.

Did both bases forget how great these coaches were to you and how much better they improved your quality of life before they arrived on campus? 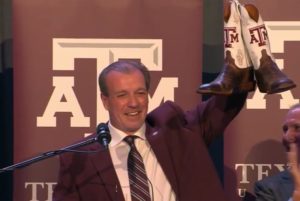 Fisher did the impossible—he actually replaced the legendary Bobby Bowden and did it in a classy way? He won numerous ACC Titles and a National Title. I understand how he would want to put his own name on an underachieving program like Texas A&M and did you see the money they threw at him?

A side note—one time I had to cover the Noles where I live in Tampa and went to Tallahassee. Fisher had to leave practice quickly that day to attend his son’s little league game but when was told I came in from Tampa, made it a point to give me a few minutes—I’ll never forget that.

Fans need to understand sometimes there is more than meets the eye. Yes Fisher could have been more upfront but he gave you much more than he took away.

I’ve said for years Gator Fans should be eternally grateful to Urban Meyer–the same for FSU Fans and Jimbo. Drop the bitterness and appreciate what he left behind.

GOT GRUDEN? Speaking of Coaches, a family member of Jon Gruden told me two years ago that one day he will “definitely” return to coaching. Will he two years later? I frankly have no idea but I know this—I don’t think money will be a factor.

Gruden has more money than he will ever need but unlike many coaches, Chucky has an unbridled passion for the grind of coaching. It’s in his DNA so I frankly would be surprised if he doesn’t give it another shot and what better shot than with the underachieving Buccaneers. 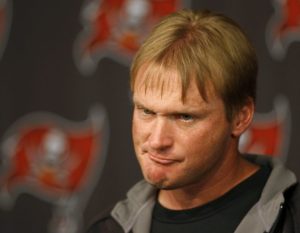 To me, Gruden couldn’t ask for a better situation. Tampa is his home, he doesn’t have to move and the one thing he’s lacked in his football life is developing a talented quarterback. He’s had veterans like Rich Gannon and Brad Johnson but never a talent like Jameis Winston. Yes Winston continues to act like a bonehead at times but I haven’t given up on him and feel Gruden would be the perfect tonic for a 23 year old quarterback who has proven he can take criticism from his head coach.

I don’t know if Gruden will take the leap with the Bucs but it’s gotta be driving him crazy. He has it made as our modern day version of John Madden but coaching is his real passion and this opportunity is all there for him. I think even if he doesn’t succeed in his return, the networks would welcome him back whenever he would want to return. Think about it Barry Melrose lasted “16” games with the Lightning and ESPN welcomed him back with open arms.

The only issue with Gruden is total control–we saw what we turned into without a quality General Manager with the Bucs–that could be an issue where you hope if he returns, he has learned from his mistakes and understands he can’t do it all.

LIONEL RULES: I have traveled all over this country but never really been to Vegas. Yes, my Dad took me there when I was in High School but I couldn’t gamble and the highlight was seeing the legendary Don Rickles–which was a great highlight.

32 years later I made my second trip to Sin City where I could get in casinos but am still not a big gambler—the highlight was seeing my man Lionel Richie in concert.

Does anything scream 80’s music more than the former lead man for the Commodores?! I’ve never been to a concert where EVERY song was a major hit—this was a fantastic performance. Richie hasn’t had a hit in decades but it didn’t matter—his staying power is strong.

His songs reminded me of many good times–slow dances in high school, parties with friends and so many memories of my teenage years.

So, I know you have your favorites—here are my five best Lionel Richie songs (Commodores included)

(2) Sail On—one of the Commodores classics, forever an all time favorite.

(3) Easy–a Commodores staple, amazing how many great hits they had.

(4) Lady—takes me back to even those Middle School days.

(5) You Are–I like up tempo Richie, he had a lot of great slow songs to pick from though. It was hard to narrow it down to five.

MONA LISA: One of my favorite magazines is, The Atlantic–the rare moderate look at our country in a political sense but it gives you so much more. Take the latest book from author Walter Isaacson who has delivered terrific biographies on Steve Jobs, Albert Einstein and Benjamin Franklin.

Yes Issacson is versatile where his latest offering is a biography of the complicated Leonardo Da Vinci. 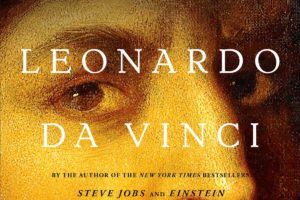 Reading an excerpt of this book in “The Atlantic” I found it interesting the passage, “How Leonardo made Mona Lisa Smile.” Issacson’s impressive research found making Mona Lisa smile, Da Vinci had many people play and sing for her. Jesters would constantly entertain her to “put an end to the melancholy that painters often succeed in giving to their portraits.”  Who knew? 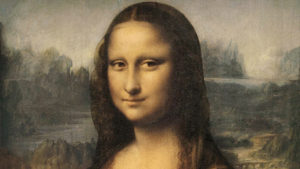 DaVinci was as detailed an artist as they come when it came to researching his projects, the Mona Lisa wasn’t any different. According to Issacson’s book, ” During the years when he was perfecting Lisa’s smile, Leonardo was spending his nights in the depths of the morgue at the Hospital of Santa Maria Nuova, near his Florence studio, peeling the skin off cadavers and studying the muscles and nerves underneath. He became fascinated by how a smile begins to form.”

Talk about no stones left unturned, look forward to reading the rest of this book soon.

NOBODY ASKED ME, BUT…I’m sure all of you had your favorite Holiday gift, well I have to pass on the best one I’ve ever had sent to me and it came from Saints Head Coach Sean Payton.

I get home three days before Christmas and there is a box in front of my door that reads…. 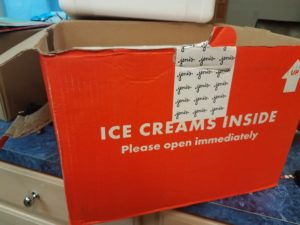 Yes Ice Cream Inside ?! And yes I did open Immediately.

Inside was the most creative and best packaged gift I’ve ever gotten during the Holidays. Right above five pints of ice cream was a layer of ice wrapped by styrofoam which amazingly made the overnight trip from Nashville. 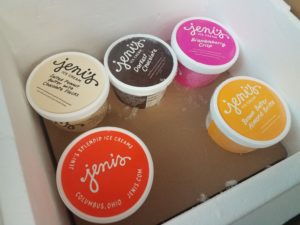 Me and my two girls promptly had a taste test where they all got a thumbs up as does Sean Payton for a Christmas job well done—much appreciated.

And Jeni’s I’ll keep plugging you in these Blogs where you can feel free to send more boxes…..

EXTRA POINT: While lukewarm to the college bowl season, very excited about the upcoming College Football Playoff. They all look to be great games but give me Clemson and Oklahoma (yes your non SEC final)—where I see the Tigers bringing home the repeat!