I’m not trying to offend anyone… but I have to come clean.

I may have grown up on the Space Coast in Titusville, Florida where we could throw a rock and hit Kennedy Space Center but it never inspired me to love Science Fiction.

Could never sit through an episode of Star Trek even though I’m truly impressed how William Shatner has kept his career going—talk about going where no man has gone before. 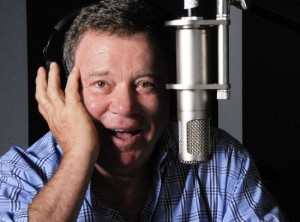 The guy sells music and doesn’t sing…good for him, shame on us.

Then you have Star Wars?? 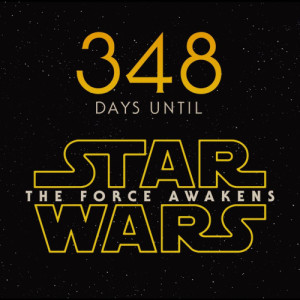 Awake me when its over–sorry, I’m not counting down. I’m a true Jedi-outsider. The force has never been with me but will admit I had a fraternity brother who pulls off an impressive and highly entertaining impersonation of Chewbacca.

Star Wars is kind of like soccer to me—-its seems to be playing year round and I don’t understand nor can I keep up with all of the action. Too many sequels, too many teams, too much TV time for both entities. 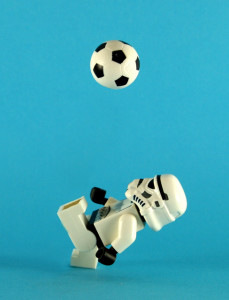 Rocky is more my speed.  That series of movies was panned for not knowing when to leave well enough alone while Darth Vader and company are applauded for extending its never ending story?? I’ll take the Italian Stallion over Luke Skywalker anyday, but that’s just me…..

Lost in Space, our first mission in this voyage around the Naborhood.  As always thanks for stopping by.

NFL DRAFT DODGING: You can dislike FSU lightning rod Jameis Winston for many reasons, but you can’t criticize the future pro for wanting to stay home on Draft Day? 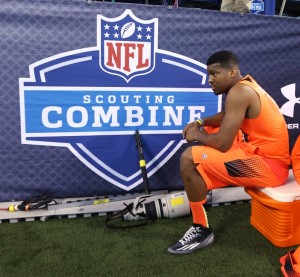 I’ve heard several media blowhards saying its his duty to be in Chicago for the Big Draft Show and his responsibility to his team to smile and hug NFL Commish Roger Goodell when his name is called.

Listen–I applaud Winston for wanting to spend Draft Day with his family and if I was him, I would do the same thing. I understand if you want to make the trip to Chicago (where you can take some family) but you will never have another draft day—so you should be able to be wherever you want—trust me its the last thing the NFL can’t control here on out.

Besides Winston’s grandmother is sick and can’t travel—several of Winston’s sanctimonious critics tend to forget that we –get over this draft dodging mess.

Its also funny to me that when Marcus Mariota said he was going to watch the Draft at home—it was backpage news.

Chicago is my favorite city but the barbeque is much better in Alabama–enjoy the home cookin Famous Jameis.

DRAFT HITS: I love the NFL Draft but always get a kick out of how serious many take all the “breaking news” down the stretch as must of it is well….lies.  I enjoy reading all the publications, scouring the websites and covering the Senior Bowl and the NFL Combine but the reality is—most of the decisions are based on the game film of these players in the fall.

Unlike baseball and basketball, this draft is special because we are familiar with its players. Some tire of the hype, I choose to embrace it.

Here are some of my Draft observations:

*I think there is no doubt Winston goes Number one to the Bucs as the best indicator is his involvement the past two weeks in Tampa at Derrick Brooks’ and Mike Alstott’s charity events with Head Coach Lovie Smith in attendance. Clearly they are surrounding him with the best role models in the area. Forget Pro Day, its almost like Lovie is sitting back and checking out his future QB at Social Day. 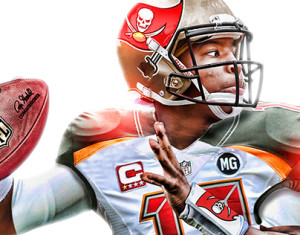 *I don’t fully trust Winston but he hasn’t had any new problems since leaving school, the headlines are all from things he did or was accused of doing at FSU. I think he’s worth the risk. Winston is hardly a Jamarcus Russell, the kid works harder and has a much higher football IQ. I really think unlike my man Johnny Manziel, he wants to be great—and that is huge.

*Many feel the best player in the draft is Florida’s Dante Fowler and I can’t argue with that—he’s not only a playmaker but the kid is a natural leader and will be fantastic with the media and in the community. Its a rare combination and I’d be shocked if he doesn’t go number three to Jacksonville.

*Chris Collinsworth says this is the best WR draft class ever and I agree. Count em–six could go in the first round! Its a big reason the Saints dumped its reliable target Kenny Stills for a third round pick—they figure they can likely get a better rookie in the third round of this draft which is loaded with targets.

*I won’t bore you with a Mock Draft but I cover the Saints so here’s my 13th pick to the commish—(if they don’t trade up) would love to see them select Michigan State CB Trae Waynes—you can never have enough good corners and nobody knows that better than the black and gold.

*I wanted (and wrongly predicted) Manziel to succeed a year ago because I loved watching him play in college, but a year later his career is on life support—-its hard to say its because he can’t play or because he doesn’t have the heart to? Huge offseason for Johnny Football. 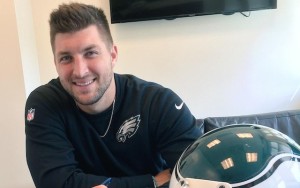 No many say Tebow who is now been given his 4th NFL try with the Eagles after sitting out the past two seasons is out simply because he isn’t good enough. That may be true but what I don’t understand is how the likes of Jimmy Clausen, Curtis Painter and Blaine Gabbert continue to cash pro paychecks and you don’t hear anything from the naysayers while Tebow, who has done more than all the above combined, continues to be a pariah.

Tebow may not be good enough and likely won’t make the Eagles but why are so many rooting against him and happy that he fails? The kid isn’t a good practice player, isn’t an accurate passer but he’s a gamer, has a unique skill set and with all the terrible QB play in the NFL—I would love to see how he would do if ever given a “legitimate” shot—if he fails, so be it.

Its funny, Tebow makes more at the SEC Network than he does with the Eagles and way more that Russell Wilson makes with the Seahawks—the kid still wants to live his dream but I doubt he will ever be given a chance to realize it.

BRUCE JENNER: When it comes to Bruce Jenner the former track and field star had a bad well, track record with me.

Going from Olympic Hero to a punching bag with the Kardashians was a mighty fall. Couple that with not knowing why he was constantly changing his appearance made him come across superficial and strange. 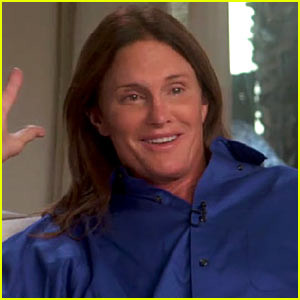 Watching along with a record TV audience, I came away from Diane Sawyer’s 20/20 interview very impressed with his story, his candidness and most of all, his courage.

I wondered how Jenner would explain how he wanted to be a woman and was very suspicious that it wasn’t just another publicity stunt but his story gave me a greater perspective not only on his plight but on the many transgender people in our country and around the world.

I’ve never had a problem with anyone who is born a homosexual or a lesbian but never truly understood how someone could be transgender until Jenner told his story. He can do a lot more good than he did as an athlete where its amazing the life he has lived.

What hit me the most watching his story was how supportive his family was—if they can be happy for Jenner—Why can’t you or me be?

BRITT BURGUNDY: Is there anything more offensive than somebody saying or inferring “Don’t you know who I am”

Ron Burgundy delivered the memorable, “I’m kind of a big deal,” line in Anchorman, which was funny because it was fiction but watching ESPN’s Britt McHenry dressing down of a parking attendant was real and extremely offensive to me. 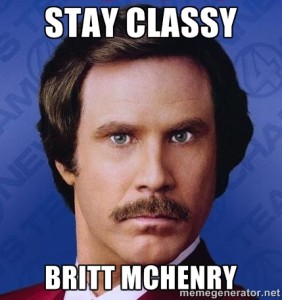 Some in my business have defended her– saying either we don’t know the whole story or she was caught in a bad moment.

Yeah, I’ve gotten mad at parking attendants before and god help anybody recording me in traffic some days but for McHenry to throw out the “I’m on TV Card” and demean the lady’s physical appearance—Who does that?

Hey Britt—nobody cares that you’re on TV and maybe now you realize it.

I thought she was exposed but I don’t think she should have been fired—-you just hope Britt Burgundy learns from the experience.

NOBODY ASKED ME, BUT….: I talk about them all the time in this Blog, “Remote Droppers.” You know a movie or TV show which makes you drop everything. Well maybe my favorite movie (certainly the best sports movie of all time)  Hoosiers was on the other night and I was done for the next few hours.

Everytime I see the movie, I notice something new–this time I was watching the character Jimmy Chitwood and I wondered what happened to that actor? 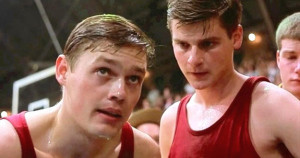 His name is Maris Valainis and his acting career never took off, he’s now a construction consultant in California but his Hoosiers story is an interesting one. It seemed he was destined to be in this movie. 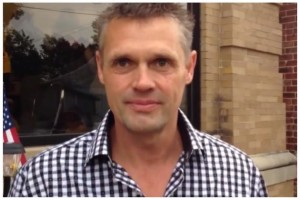 The Indiana native was tired of waiting in line at the casting call and decided to leave but before he got too far, a casting director pulled him aside and asked to see his basketball skills which were good enough to get him a call back. Its funny in the movie, Valanis was the only one on the team who didn’t play high school basketball but he impressed when he had to.

How bout these side stories: The scene in Hoosiers with Jimmy Chitwood and Coach Norman Dale talking while Jimmy is shooting baskets at an outdoor basket was filmed in one take. Valainis said that he “wasn’t even listening to (Gene Hackman). I was just concentrating on making (the shots) and I made one and they kept going in.” In the scene where Chitwood made the final shot of the state championship game, Valainis was told that whether he made the shot or not, people were going to rush the floor because of the need for a wide shot of the court. Luckily, he made it on the first take (and later sank the same shot in a second take).

Pretty amazing stuff from an amazing movie, I know I’ll drop my remote the next time its on.

EXTRA POINT: Really like the Rays so far—but like I say when they start slow—its still early.