Move over March Madness, this year it’s been an ever-growing dose of Mixed Madness…mixed emotions.

I hate the One and Done?!

It’s the first year in my adult life, I didn’t fill out a bracket—which may have been great given how crazy this tournament has been. Not knowing the teams and players like the good ole college basketball days just left me disinterested. 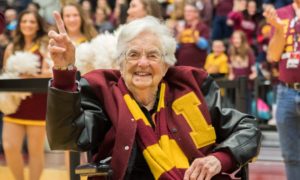 I hate that I can’t name more than five players in the tournament…?!

Wish we could go back to the good ole days of getting to know players for three to four years, miss rooting for those Florida Gators back to back National Title teams where you were familiar with every starter. It just seems college basketball has become a party where the guests come in for five minutes and leave before you got to know them.

I loved watching Christian Laettner win a pool for me while breaking Kentucky’s hearts. 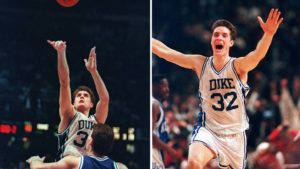 I hated watching the recent Duke and Kansas OT Classic and only knowing who Grayson Allen was.

What’s amazing is that will all the anonymity, March Madness is still incredible. What other sport can you COMPLETELY ignore the entire regular season yet still be glued to the action for it’s postseason. That would be like many ignoring the NFL until the Super Bowl kicked off.

I love a 16th seed finally beating a one.

I hate that I can’t name one player in this year’s Final Four.

Please college basketball—make it right. You may not have the votes to go all in like baseball where theykeep the kids in school for three years while giving them the option to go pro out of high school—but is two years “too” much to ask? Would really like “three” in college hoops too…..

College Hoops the first of several shots we take as we dribble around another edition of the Naborhood. As always, thanks for stopping by. 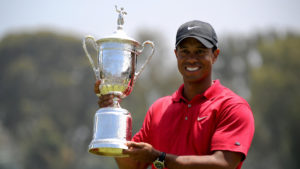 I wasn’t ready to pull the “never” card with Tiger Woods but it was tempting. It just seemed as if health and frankly karma wasn’t on the most “electric” athlete our country has ever seen’s side.

Electric? Polarizing? sure but let’s be honest. No athlete has the fans going “GOO GOO” and “Ga GA” like the legion following Tiger.

Sure everybody loves Jordan, many idolized Ali and the stories of Babe Ruth’s fandom are legendary but Tiger Wood’s following is diverse and covers the entire spectrum.

His latest comeback makes me believe he not only will win again but win a major too. Furthermore, it reinforces the fact that no athlete in our country’s history makes both kids and grown men scream at equal octaves.

Take the recent Valspar Championship where Tiger made his first appearance. You not only saw adults follow him in droves, I heard members of the media, who have covered the biggest events in sports—claim this was the best thing they’ve ever witnessed. And this wasn’t even a Major.

Tiger does that to a lot of people. Some swear they never will root for him again but it seems both factions have one thing in common—they will be watching–especially if he makes a run at Augusta.

THE BEST INTERVIEW: In football, quarterbacks get all the love, running backs score a lot of the touchdowns and those receivers get much of the TV time.

But for if I’m looking for the best interviews, give me those offensive lineman.

Covering the league for many years, there is no question the big men in the trenches always deliver the best perspective. Covering Jacksonville in the nineties, Tony Boselli was a Hall of Fame talent and a Hall of Fame interview. When I covered the Bucs for many years–all of the offensive lineman were great and then you have my time with the Saints the past 12 seasons–we have a new leader in the clubhouse.

This guy was the absolute best….. 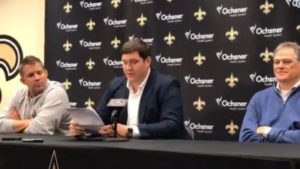 His story was the best too. The former seventh round pick admitted during his first Training Camp he called his Dad thinking he wouldn’t even make it to the regular season back in 2006. He more than beat the odds though—turning in a stellar 12 year career where he outlived everybody in his draft class which included top pick Reggie Bush. 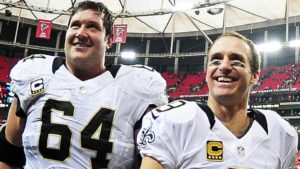 The Northwestern grad had all the S’s. He was smart, serious, silly and sensitive. During his final presser he cried talking about how he never wanted to let Drew Brees down—a goodbye which made Brees cry as well. I’ve never seen that.

Strief had that kind of impact on everyone from his quarterback to all the media geeks as well. We don’t agree on much but it was unanimous that Strief was our savior–win or lose–he knew what to say and more importantly how to say it.

When it doubt young NFL reporters–always go to those offensive lineman, unfortunately Strief is no longer an option…..

THOSE GAMEDAY GRUDENS: Just got back from the NFL Meetings where it’s always an interesting experience covering those annual NFL coaching breakfasts. The league does a great job giving the media access to all of the head coaches where they used to break it up with an NFC and then an AFC session but this year they had all the coaches in one ballroom together.

Which meant you had two Grudens in the same room together 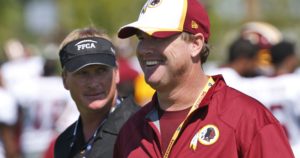 Isn’t it amazing–there are only 32 of these jobs in the world but two are occupied by one family?!  Even more amazing, the Harbaughs did it before them—what are odds?

A few years ago, my company covered a charity event where I had a great visit with the proud father of these two head coaches Jim Gruden. You could tell immediately how proud he was of the success of two sons’ who share different personalities but the same nervous yet protective father.

Papa Gruden shared with me something interesting that he gets so nervous when his son’s coach that he can’t watch the games live. Instead he DVR’s them and takes a stroll around the neighborhood getting an occasional update from family and friends. 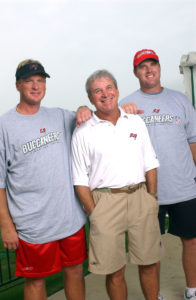 Remembering that story, I asked Jay Gruden about it and he didn’t seem surprised laughing and saying “he’s been that way since high school.”

Across the room, I asked Jon Gruden about Dad’s game day anxiety and wondered “What will it be like for your Dad now that he has two son’s coaching in the NFL this season?”

Gruden looked at me like he was ready for the question and said tongue in cheek “Why do you think I sat out of coaching for so long, now that I’m back, I’m worried about my Dad more than anybody.”

Jon Gruden respects his Dad a great deal and cherishes his memories of him as a running backs coach at Notre Dame when Joe Montana was the quarterback, “I still know the fight song”, Jon told me. Papa Gruden went on to coach in the NFL moving his sons to Tampa in the early days with the Bucs.

But now the Raiders coach says his Dad’s game day nerves aren’t out of bounds, “It’s no different (than any Dad) watching their son play or perform. But I will say, my Dad gets a little up tight.”

NOBODY ASKED ME, BUT….Ok ESPN I’m gonna take the bait. I’m a sucker for a good list but recently your list of the Dominant 20 athletes of the past two decades—I thought this was a big swing and miss.

Having Tiger number one is rather sketchy given how he hasn’t won in over four years? I can handle Lebron at number two but then everything goes sideways. 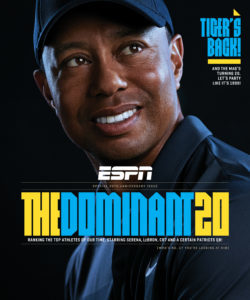 How on earth is Peyton Manning third—-and Tom Brady …20th? I would have Tom Brady third and Manning 20th.

The biggest omission was Michael Phelps—he isn’t on the list??? Have no problem with Roger Federer in the top five but Usain Bolt (the fastest man ever) needs to be higher than 10th and Serena Williams doesn’t crack the top 10?

Maybe they just want people to click and debate (I took the bait) but ESPN is usually better at this. Their Sports Century countdown of the best athletes of the last century was arguably the best work they have ever produced and the list was much more credible.

This one fell short in a big way.

EXTRA POINT: The best TV show not on Netflix is back and you should check it out. “Billions” on Showtime showcases great writing and tremendous acting where the plot revolves around a New York Attorney General (played by my favorite actor Paul Giamatti going toe to toe versus an equally aggressive hedge fund king Bobby Alexrod (played by the extremely talented Damian Lewis). It’s debut was fantastic—this show is one of the few reasons I still have cable anymore?!