It’s crazy that it kicked off on my birthday 21 years ago—21 years later, sadly, I’m just tuning in.

Can’t believe I was so late to this tremendous party.

The gift of Netflix just keeps on giving for all of us out there and boy what a gift it is— where I gotta give credit to my tech savvy 12 year old daughter who showed me to the promised land of binge wonderful.

Can you believe at one point Netflix couldn’t even get Blockbuster to buy it—talk about buyer’s remorse…? True Story and years later we don’t have to worry about rewinding charges….

I get it, many of you jumped in the game way before me but I’m here to stay folks—this is pretty addictive stuff. If I didn’t have to depart with all the sporting events on TV, Netflix would make me say goodbye to cable TV for good. I hardly ever watch anything on HBO and the rest of the those movie channels–why would you when you have Netflix?

So much for my attempt to read more and watch TV less.

Out of the gates, I jumped on the Breaking Bad bandwagon where it’s rare that something is hyped up so much yet delivers higher than any expectations I had going in. EVERY body I know who has seen this has loved it and for good reason. Before I watched this show, The Sopranos was my all timer–but sorry Tony and Paulie Walnuts you’re now holding down second. 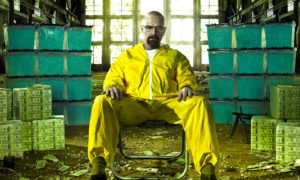 Breaking Bad was as addictive as the meth Walter was cooking up and no I don’t advocate drug use–I advocate Netflix. I can only hope to love my next Netflixation as much—I really looked forward to watching Breaking Bad and was somewhat sad when it was over?! Walter was twisted, Jessie was complicated but by favorite characters were Sal and Hank—never a dull moment with those guys. 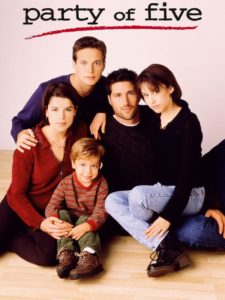 I’m open to suggestions on what to get addicted to next but in the meantime went a whole different direction catching up with a highly underrated nineties show, “Party of Five.” I saw it come up on the menu and realized as much as I liked this show over 20 years ago—I never saw the first two seasons—-well I have now. Funny how time flies—this show was hot in the mid nineties where all these years later, I laughed watching the cast still use phone books, beepers and it was strange pre 911 to remember the days when family and friends could wait for you at the gate of airports..but I digress.

We’ve had some great inventions over the past few decades and while I love my ever changing cell phone and while the Ipod is a lifesaver on the treadmill—I gotta say Netflix tops the charts.

But Netflix Nation could you do me huge favor? Please put back recently deleted “Friday Night Lights“? I still haven’t seen the last few seasons and don’t feel like dealing with old DVD’s?

“Binge watching” the first lap in our wide ranging run around the Naborhood—as usual thanks for stopping by.

SARCASM SHOUTOUT: As a rule sarcasm never gets it’s due–frankly over the years it’s frowned upon. It leads to someone rolling their eyes, possible detention, a likely grounding –just a general “time out” in our society—but maybe that’s changing. Yes too much of it is often a bad thing—you like your sarcasm in small but effective doses.

After years of getting scoffed at by teachers, bosses and co-workers–it seems you’re local smart aleck if finally getting some love and we’re talking credible sources here…… 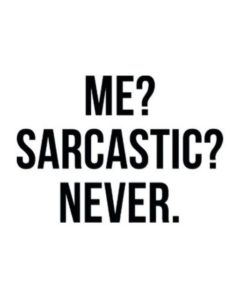 According to the Wall Street Journal in a new study published in the journal Organizational Behavior and Human Decision Processes, finds that sarcasm in the workplace can actually make you a more creative thinker.

In a recent article via Esquire magazine: Researchers at Harvard, Columbia, and the European business school INSEAD did something I’ve never heard–they “manipulated sarcasm.”  Yes this sarcasm study was performed in a lab by having participants simulate conversations. In one study, the subjects had to say something sarcastic or sincere, hear a comment that was sarcastic or sincere, or have a neutral conversation. In a second, participants had to remember a time when they said or heard something sarcastic, sincere, or neutral, and in a third study, they had to imagine a sarcastic, sincere, or neutral punchline to a joke. Then they all completed creativity tasks, and the people in the sarcastic conditions all performed better.

How about that–sarcasm rules! Maybe it’s art imitating life as those guys in Office Space were rewarded, maybe you could be next?!….but there’s more: 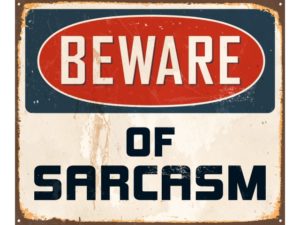 According to the researchers, firing off a sarcastic remark can spark creativity because you have to think abstractly, figuring out the distance between the literal and figurative meaning of what you’re saying. And the same goes for receiving sarcasm, but only if you’re in a trusting relationship with the person you’re talking to. Otherwise, that sarcasm can create conflict, since it’s always so hard to figure out tone when you don’t know a person well.

Makes sense to me—know your audience but once you do—jump right in—it could lead to bigger and better things–even if you’re a smart ass.

BILLY’S JOEL’s BEST: I wanted to see Tom Petty when he came to Tampa almost a year ago but failed to do it—-unfortunately that was the last chance for many of us—I wasn’t about to make the same mistake with Billy Joel.

Like Petty, I saw Joel back in the late eighties but haven’t seen him since. You know what’s crazy–Billy Joel really hasn’t had any new songs since that 1988 concert, in fact I remember his then wife Christie Brinkley being on stage with him—but as a friend of mine told me at lunch the other day. “It doesn’t matter.” He was right– Billy has given us so many great songs—his work carries over for decades. That’s rare air….. 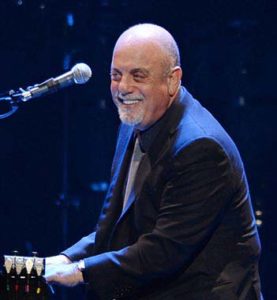 The Piano Man will turn 69 in May but hasn’t lost his fastball. His concert was as good in 2018 as it was in 1988. He may not move around the stage as well but you don’t go see Billy Joel for the fanfare–you go for the hits and he has an endless catalog. Asked why he doesn’t write songs anymore? it seems Joel is at piece these days and really for decades, “I thought I’d had my say.”  So, in an attempt to do the impossible, I’m gonna deliver my top five Billy Joel songs–

(5) Running On Ice—I’m guessing nobody has this one on their list buy yours truly—you hardly ever hear this at his concert’s either (I didn’t this time) but it’s from his underrated “The Bridge” album released in 1996. “This is the Time” another great song on that album–catchy little tune.

(4) Vienna—another underrated song even though Joel says when he gives his crowds the choice between this one and one of his biggest hits “Just the way you are”—Vienna amazingly always wins.

(3) Allentown–Joel can deliver the great pop hits but he can also write with the times and this 80’s salute to the plight of the steel workers losing their jobs in at Bethlehem’s Steel plant in Allentown PA is vintage Billy.

(2) Scenes from an Italian Restaurant: The Stranger is littered with hits but this is my favorite from Billy Joel’s best album–very long song takes you on quite a ride. Think about that Stranger album–it had this song, Vienna plus She’s Always a Woman, Only The Good Die Young, Stranger, Just The Way You Are AND Movin Out—unbelievable.

(1) Piano Man: I know it’s overplayed but it was Joel’s first big hit way back in 1973 and still carries weight, can you believe–45 years later? The man has staying power.

By the way Joel was asked what his five favorite songs were by Stephen Colbert a year ago and without hesitation–here’s what he said: 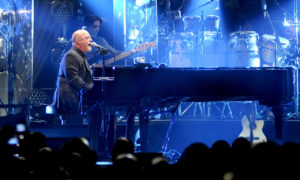 (1) Scenes from an Italian Restaurant.

MIGHTY MINNESOTA: While Billy Joel didn’t take long to become a star, it seems we are witnessing an crazy trend in the sports world where those lovable losers are turning the tables at an alarming rate.

We had Cleveland getting a basketball title and then those Cubbies followed by the once ringless Houston Astros and most recently those bridesmaids no more Philadelphia Eagles-–so what great American underdog is next up?? 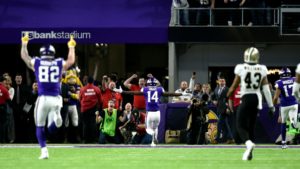 Yes, if you look hard I had a front row seat to infamous Minnesota Miracle slash Saints Nightmare (Far left–next to the Vikings team employee with his mouth wide open).  I remember right before that play, the Vikings fans and media around me were bracing for the worst—something they have felt for decades but for once—the shoe amazingly dropped on the other sideline. Afterwards, those around me were so happy and so polite–a rare combination in sports these days.

It made me want to root for the city and those hard luck Vikings where I was sure they would go on to become the first franchise to host a Super Bowl—but again they couldn’t make it. It’s cold in Minneapolis but the people are warm and deserve better—would love to see them be the next city to get the monkey off their back.

NOBODY ASKED ME, BUT….I was happy just trying to stay in shape and run an occasional 5K but a great friend pushed me to train for a 15K recently and I’m glad she did. Training for this experience really changed my lifestyle—I am eating and sleeping better and running farther—all with the hopes that I would just run the whole thing without stopping. I’ve never fun further than 6 miles in my life, so I went in just hoping for the best.

Well guess what—I actually did it. 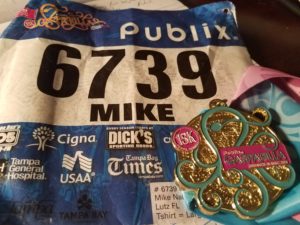 Running and finishing the recent Gasparilla Distance Classic 15 K left me wanting more. I loved swimming growing up but never enjoyed running—that has all changed now. It’s funny going in, I wasn’t sure I could survive a 15 K–in fact once I got in the rhythm, I really didn’t like seeing the mile markers, I just wanted to keep running really not knowing how much I had left (mind over matter).

But now–I have my sites set on a  half marathon and let’s keep running from there.

EXTRA POINT: A great tip for your next Super Bowl party or if you are planning a fun tailgate with friends—Log on to bigmouthinc.com and they have endless fun items for you.

This is what they sent me for my recent Super Bowl party—my guests loved it and we look forward to taking this outside for our next big tailgating experience. 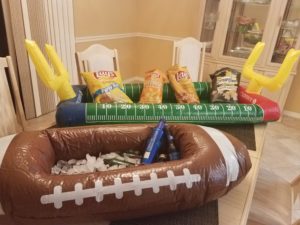 Big Mouth is a growing and creative company—I’ve never seen anything quite like their product line—-check them out!