We all have a word that irritates us. Mine is often…..

Sure there are great exceptions. Every 9/11 we will of course “never forget” and I love when Jim Valvano proclaimed “Never give up” Those are certainly positive connotations.

Most of the time though its used in a shortsighted fashion.

Oh that guy will NEVER be great? He is.

She will NEVER advance? She does

In the wide world of sports we nix NEVER courtesy countless late round draft picks who were told they would NEVER succeed….guess what… many have.

Sure Tiger may NEVER win a Major again but I’m not willing to use the N-word just yet.

The Cubs and the World Series—ok maybe I’m tempted……

You can even add the latest Ray Rice disaster for the NFL. Many say he will NEVER play in the league again. I wouldn’t be surprised if you see him running the ball as soon as next season. That’s just the reality of professional sports. If he can help a team, he will play—its that simple.

We as a social media society have become more and more reactive or make that —overreactive when good, bad and yes even damaging news erupts.

Recent history said Michael Vick would NEVER play in the league again and more recently that Riley Cooper after using the “other” N-word would never play for his own team again.

Both guys are still playing and are doing it on THE SAME TEAM!

Often not a good word. It limits us, its not realistic and almost NEVER allows us to think about other options or sometimes big picture solutions.

Never Never land, the first of many stops in this edition of the Naborhood. As always, thanks for stopping by.

RATED R: The NFL is surely R-Rated these days. Between Ray Rice and Roger Goodell, the R’s are working overtime in one gigantic mess for a league that is testing the theory that its bullet proof.

Let’s begin with Rice. He’s a talented running back but his best moves have been avoiding tackles from the legal system (he should have served jail time) and a bumbling commish that should have suspended him for AT LEAST half the season instead of two games. Rice eventually got his due but unlike the many domestic abuse cases before him, he was caught on tape. For the people who are shocked by this, I guarantee you MANY prior cases in the league are just as bad or worse than what you saw between Rice and his wife in the elevator footage.  Those prior athletes are fortunate they weren’t exposed like the former Raven. Hopefully this will prevent abuse down the road. 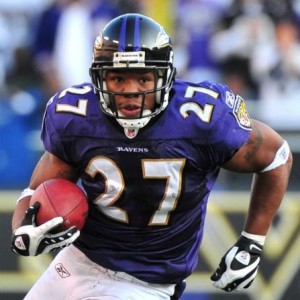 How did this take so long? Video surfaced of Rice dragging his wife out of an elevator—in February? Anyone that saw that knew something terrible happened but it takes TMZ of all sources to break the news seven months later?? TMZ also broke stories on Donald Sterling and Jameis Winston as well—what does that say about the present state of journalism in our country? I don’t know about you but watching that video once was enough–I couldn’t watch it again.

NO “GOOD”ELL: I understand those who say NFL Commish Roger Goodell should be fired. The embodiment of the NFL Commissioner goes against everything our country stands for. He is a dictator with no judge and jury who passes out suspensions on a case by case basis with no consistency and now it seems no credibility.

Roger …Roger?? Hello? Its bad enough that he “claims” that he never saw the Rice video but its even worse that he never sought it out—assuming he is telling the truth, which is understandably tough to believe given his recent track record. 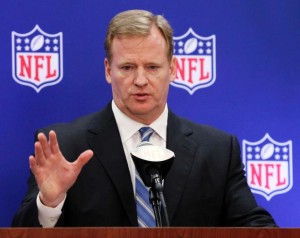 Goodell started out strong as commish delegating stern punishments to the likes of Vick,  Bill Belichick in Spygate, and Ben Roethlisberger for his “alleged” sexual assault but in recent years he’s either power hungry or simply gotten lazy–or both.

His handling of Bountygate was a joke from a player standpoint as his predecessor Paul Tagliabue had to come out of the bullpen and vacate all of Goodell’s suspensions to Saints players which subsequently cut short careers and damaged many reputations.  Several Saints repeatedly refused to take lesser punishments knowing they were innocent until Tagliabue eventually came in and removed them completely—what an embarrassment?

Unlike many, I will not call for Goodell’s firing UNLESS its proven he lied. You can’t have a commissioner moving forward you can’t trust . With the exception of the many owners Goodell makes richer and richer every season—I think the trust factor is already eroding rapidly among several players–I know its long gone in New Orleans. It will be interesting to see where this goes when they turn things over to the so called “independent investigation.”

*The Big Ten is who they thought we were…except worse. 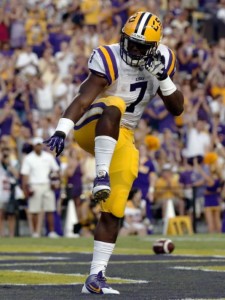 *USC Athletic Director Pat Haden may be a Rhodes Scholar but he was an idiot for coming down from the press box to argue with the officials. Yes he should be taken off the Playoff Committee as should every “active” AD—the system is complicated enough, let’s eliminate the bias or the likely bias right off the bat.

But my biggest problem so far with college football—-please can we rid ourselves of what we have seen from many teams the first two weeks–watching these ridiculous cream puffs make their way against the likes of the Gators (Eastern Michigan), FSU shouldn’t be playing The Citadel and Miami doesn’t need to be playing FAMU??

Brent Musberger should not be calling games involving…Sam Houston St…. 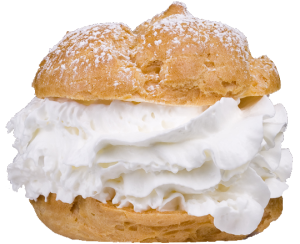 How bout this for an idea—maybe Florida could play Miami or we could have more SEC games? With a college playoff now in the fold there is more wiggle room which should free these AD’s into scheduling tougher opponents.

Wasn’t it great watching Va Tech against Ohio St and for a half Oregon and Michigan St? It sure beat Alabama shutting out FAU….

The NFL has a preseason, let’s eliminate it from our glorious college football schedule.

FAMILY GUY/SIMPSONS: I remember being in Gainesville my last two years as a college student and the local cable was so bad, we actually met at bars because that was the only place we could see this new show everyone was talking about ….The Simpsons. None of us had ever seen anything like it and often it was the TV highlight of our week. I must admit, I haven’t seen the show in years but amazingly its still going strong.

Recently I read an article in Entertainment Weekly where for the first time ever the creator of The Simpsons Matt Groening and the Family Guy’s Seth MacFarlane together where both will debuting on Fox soon the first episode where they will join forces. 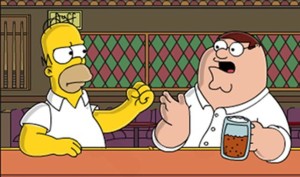 Thought it was interesting in the interview that Groening’s 14 year old son came home from school and said to his Dad that all the kids like Family Guy better and that the Simpson’s wasn’t cool anymore.

MacFarlane on the other hand says The Simpsons changed his life., “(the) show redirected the course of where I wanted my professional life to go. I wanted to be a Disney animator and then The SImpsons came out, and in every way—writing-wise, production-wise, timing-wise, animation-wise–it just rewrote the rulebook. Suddenly I was laughing out loud at cartoons.”

Two talented guys for sure and on September 28th check out Family Guy and The Simpsons debut. Amazing they boast 37 years together of great comedy and are still cranking out great TV.

NOBODY ASKED ME, BUT…..I don’t know about you but I usually like to hit a few good movies a month but recently there doesn’t seem to be anything out there. I was reading my local paper, the Tampa Bay Times‘ entertainment section where they broke down 12 current films. For the first time ever, I noticed they didn’t recommend ANY of them??? In the three catagories of –Don’t miss, Don’t hurry and Don’t bother about 90 percent of the reviews from eight different critics said Don’t Bother! I’ve never seen this kind of drought…..hope help is on the way…

EXTRA POINT: Still like the Saints and the Broncos in the Super Bowl….