Once in a while, I would buy one in an airport or more often at a grocery store. It wasn’t enough to satisfy my constant craving.

I fought it hard for months and then the months turned into years.

After two years, I cried uncle, just couldn’t take it anymore and had to have you back in my driveway…… 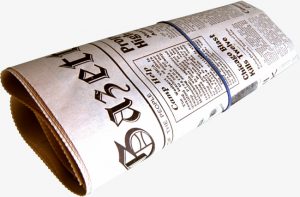 Oh how I’ve missed you morning paper. Reading you on my Ipad was easier (especially on a plane) but it wasn’t the same as picking you up off my driveway each morning—the gift that truly keeps giving.

Obviously it doesn’t take much to get me excited.

So after a two year hiatus, I have you back in my life where I’m much better for it. Everybody reads the paper differently— My daily drill sports section first then the front section and finally the local.

For many the morning paper is a lost art and I get it.  I’m surely in the minority as according to a Pew Research Center 2018 survey most Americans get their news off of television and more even get it off of social media than your morning paper where the gap is widening each year. No real surprise there as so much has changed in these tech times, especially the past ten years. This paper trend has been downward spiraling for awhile.

Think about it, growing up you used to see a paper in every driveway and now you’d be lucky to see two or three on any given street?  If you’re 30 or younger, the morning paper isn’t a part of your DNA, so no offense taken.

Still, I love mine and have missed it where without it, I would often get my breaking news from social media (Twitter is your worst nightmare Morning Paper.) Yet when it’s delivered daily it forces you to read it and as a result I’m more educated in myriad of subjects. 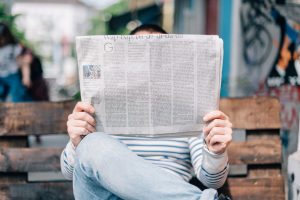 A friend on Facebook recently posted ” I have never seen a Marvel movie and probably won’t ever see this new one…whatever it is called. And never watched Game of Thrones.  Not my thing.

But I still geek out on the NFL draft and the Sunday paper.

I could immediately tell we were the same age where I felt the exact way on all of the above—- like many of us we know what we like where we are a product of our early years.

Morning paper, thanks for reminding me to not deprive yourself of those little things if you can. I don’t know how I lasted this long without you, but I’m gonna enjoy taking you out of my driveway until this beleaguered newspaper industry takes a knee. It’s sadly seems only a matter of time which made the change even more necessary.

I know your a time bomb morning paper, but I’m prepared to run out the clock as long as I can.

A Newspaper reunion the first of many stops in another trip around the Naborhood, as usual thanks for stopping by.

NFL DRAFT  STIGMAS: Many of our major league sports have said goodbye to stigmas but football seems to be the ongoing exception, especially when it comes to height.

Think about it 5’6 Spud Webb won the NBA Slam Dunk contest…..33 years ago?!  For years short guys have skated all over the NHL ice and in baseball you had 5’6 and 165 pound Jose Altuve win the American league MVP two seasons ago… 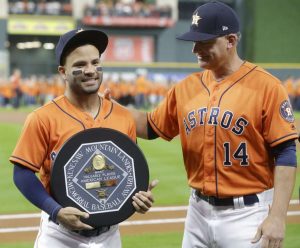 Short guys have been given chances in sports for years, maybe it’s finally changing in football where after drafting players for decades they finally have their first “sub six foot” quarterback going number one overall.  Yes all 5 foot-10 (can’t forget about the extra 1/8) of Kyler Murray was scooped up by the Cardinals where time will tell how if he will succeed but it’s amazing how much time has gone by before this finally happened. 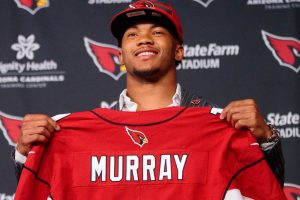 Murray’s selection shows how once upon a time the criticism of Doug Flutie, Drew Brees and most recently Russell Wilson and Baker Mayfield was ridiculously overhyped but you also have to point to how the NFL has evolved from I-Formations to spread offenses gone wild.

The real symbol of how stigmatized the NFL Draft has been over the years beyond hand size, 40 times and the ridiculous combine evaluation of Tom Brady is Kyler Murray’ own father, Kevin Murray. You see the elder Murray was a great athlete too, a quarterback at Texas A&M in the mid eighties but mistakenly opted to leave school early because of looming NCAA investigations. 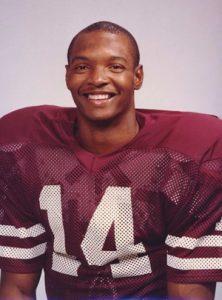 Back then, the NFL stigmatized the majority of black quarterbacks so the elder Murray never had a chance. His college coach Jackie Sherrill told Sports Illustrated this month “I was around Danny Marino, Kevin fit in the upper echelon. The color of his skin didn’t help at quarterback.” As for Kevin? “You didn’t see many people my color in the 80’s doing what I was doing at quarterback. Our (family) circle is small. And some of what I went through has a whole lot do with that.”

Now his family circle includes his groundbreaking and diminutive son who is breaking new and needed ground and hopefully he finds breakthrough success. It’s great to see that the NFL has moved past it’s racial stereotypes years ago, now time to see those short guys shine!

“THE COST OF THESE DREAMS“: Speaking of breaking barriers, one of our country’s best sportswriters, heck best writers period has a new book which is about sports but you don’t have to be a sports fan to appreciate his message.

Wright Thompson is known for getting great access and he makes the most of every contact in his new offering, “The Cost Of These Dreams,” Thompson does a great job of breaking down our country’s most celebrated players and coaches to show how their great successes ultimately effect them. How they deal with life once the crowds stop cheering and the lights don’t burn bright anymore—each story is different yet fascinating. 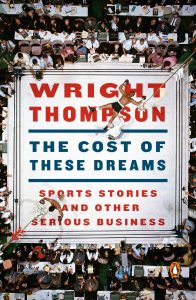 Thompson’s first chapter on Michael Jordan really sets the tone as Thompson earned Jordan’s trust for hours of behind the scenes time and he turned it into a chapter on how Jordan has evolved since his playing days where he can’t let go of his competitive drive. On the other hand, Thompson didn’t receive access to Tiger Woods but made up for it by talking to many of those close to him to discover how the price of elite success takes its toll on those who have accomplished so much.

Urban Meyer, Pat Riley and countless others are featured in this book which is hard to put down. Every story  moves you in several different directions—I highly recommend it and remember you don’t have to be in love with sports to appreciate these journeys.

:My 14 year old daughter shakes her head at me when I bring up the Easter Bunny (will never give that up) but I shake my head at the unbelievable boom of a time honored Easter tradition, Peeps?!

What in the world has happened to the growing market of one of our time honored Easter favorites—??! 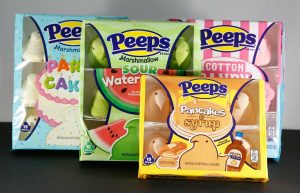 Just like Oreos, the Peeps industry has gone creatively mad. Uh……”Pancakes and Syrup Peeps” America we officially have a problem?! Don’t know about you but when I was a kid I could eat a handful of these, now I can’t even finish one, especially if it’s a “Sour Watermelon”

NOBODY ASKED ME, BUT….. Tiger Woods proved once again never to say never and that includes even Tiger. Just a few years ago, Woods could barely sit up at the Masters Champions dinner where he told his peers in Augusta he may never play golf again. 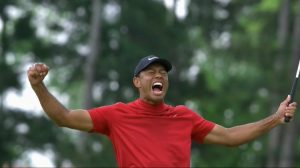 Woods winning the Masters was amazing but for me even more incredible is the continued and obsessive fascination many have with Tiger. He’s never been a warm guy in fact he’s often polarizing but that’s exactly what makes him captivating. Tiger Woods is the the golf gift that never stops giving–non stop drama off and on the course.

Despite his arrest, his many affairs it’s the comeback that we all root for. Some may never like Tiger but most of us tend to appreciate those falling flat on their face only to have the moxie to rise up and be great again. We’ve never seen anything quite like Tiger in American sports but after watching it, I’ll never say we’ll “never” see it again—Tiger has taught us all that.

EXTRA POINT: Recently finished watching the final seasons of “The Office” on Netflix where I didn’t see many after Michael Scott left Dunder Mifflin—-can’t we agree this show was never the same after Steve Carrell left??  ——-even thought Ed Helms “Andy” character had it’s moments until he lost his mind at the end. So many shows don’t need a second act but with great writing I would be all for a second helping of this show, the possibilities are really endless.