Wow—can we get a football do-over? My goodness folks…..

For all of us looking forward to football season, we’ve been hit like a receiver catching a ball in heavy traffic.

From Ray Rice to Adrian Peterson to go along with the recent domestic violence cases of  Greg Hardy and remarkably another one THIS WEEK in Jonathan Dwyer–the NFL isn’t National—its currently the Negative Football League.

Instead of Fantasy Football—the stark reality has been revealing…. or has it?

The NFL’s surely tested the theory that its bullet proof while at the same time testing our  collective patience. While the news has been negative, I’m here to tell you the majority of these players aren’t bad guys—I truly believe the bad apples are getting all the attention—similar to our everyday life.

Local news has a way of glossing over the majority of great things happening in our society and scooping up the bottom 10 percent and plastering it all over our TV’s and on our front pages daily. When it comes to the local loonacy, I could care less about seeing the majority of it, but the news directors always preached to me that if it “bleeds it leads”—pretty tacky stuff.

The NFL sagas of Rice and Peterson should be reported on and its been influential in creating awareness while increasing lackluster punishment standards but I know these cases are the exception not the norm. The team I cover,the New Orleans Saints, is the perfect example.

I have covered them for the past nine years and over that ENTIRE period of time I can only remember two off the field incidents.

Yes, I said two incidents in…. nine years. You never truly know these athletes but that track record speaks for itself.

These guys aren’t convicts, they are solid community men whom I know are irritated by the current perception of the league.

They truly have been Saints for the most part and its a shame many of the headlines we read today give the impression that most football players are thugs, bad husbands and terrible parents. The truth is many players like many people in society don’t get attention until they do something negative—a big pet peeve of mine.

Dwelling on the negative, the first of many stops in his week’s drive around the Naborhood. As usual thanks for stopping by.

GOODell GRIEF: I’ve maintained throughout the past nighmarish NFL month, that commish Roger Goodell should keep his job but after watching his latest presser, I’ve changed my mind.

I give him credit for facing the music and unlike many in his position for answering questions but here’s the catch—he didn’t answer any of the important ones. 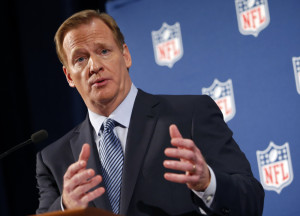 Goodell said he was sorry but he had to say that. What I wanted him to say is how HE should be punished. You make 44 million a year—why don’t you take a few mil and give it to domestic violence causes who sorely need it?

He’s great at handing out suspensions, it would be nice if Roger would slap himself on the wrist and maybe show a little more remorse than standing behind a podium and reading a longwinded statement which basically stated–I’ve screwed up bad  but we’ll just try to get it right  next time.

Practice what you preach Commish.

He tells Saints Head Coach Sean Payton “Ignorance is no defense” for claiming not to know anything about Bountygate—yet Goodell claims ignorance in many of his major missteps—- but his penalty is, I’ll do better next time??? Payton’s was sitting out for a year and losing five million dollars in salary….loads of hypocrisy there.

Goodell admitted during his mea culpa that the league essentially had no rules or regulations for…anything??? He never admitted he would relinquish any of his power and defended a so called” independent investigation” which will be headed by former FBI Director Robert Mueller whose law firm has done extensive work WITH the NFL? Not sure I see the independence in that…

There is no system of checks and balances when it comes to Goodell and his NFL castle. Its king only making amends because outlets like TMZ exposed him with the Ray Rice tape which I find very hard to believe he never saw?? Like baseball, I wish the NFL would bring in a commissioner who didn’t come up through the bureacratic ranks and would bring more leadership and credibility to the position which is famished  for it.

LAMEOUS JAMEIS: College football isn’t immune to distractions either thanks to the gift that keeps on giving, FSU QB Jameis Winston.

First off let’t not compare this kid to Johnny Football. Manziel was just a party animal—he never stole anything, was never “accused” of rape and to my knowledge given 2 strikes didn’t shout obscenities at his student union. You know if he did, it would have been Twitter fodder.

Funny at last year’s FSU Media Day, Jameis Football said,” If I get Manziel Disease, I want every one of you all to get your mikes and start slapping me on the head.” Bad Karma– as the Winston Virus has proved to be much more potent…

Winston’s main problem is he’s been enabled his whole life. His Dad said after he stole the Crab legs that he needs someone to watch him around the clock–clearly the lack of  accountability started at home.

I can’t stand watching his press conferences where he says the same things and smiles—-stop smiling? He talks about overcoming adversity. Hey Jameis—you create the adversity!

No way he should play against Clemson. The half game suspension was a joke,didn’t send the right message and I don’t want to hear those who say all he did was say things any other underclassman says all the time—-this was his 3rd strike–not his 1st?! One game is about right. Its Clemson not The Citadel— if it costs FSU a chance at the college playoff–Winston for a change would be held responsible for costing his team a win—instead of giving him a chance to be a hero coming off the bench.

I feel for my FSU friends who for the first time in years have a great football team to follow but I get the feeling many feel they are selling their soul to have to cheer for such a self absorbed quarterback who has strolled through life without any discipline.

Will sitting this dance out finally lead to a belated turnaround for Jameis?? Sorry if I have my doubts….

ROCK N ROLL HALL: The highlight of my recent trip to Cleveland wasn’t covering the Saints versus Browns, no it was the next morning when I checked out the Rock and Roll Hall of Fame. Many have wondered why did they put this in Cleveland? The locals claim rock and roll was born here as local DJ Alan Freed first coined the term “rock and roll” on the local airwaves and it led to the first rock and roll concert in our country. That sparked a trend as Cleveland became a major destination for many acts after that. 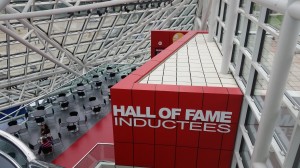 I highly recommend this place. The first thing they do is take your picture with the instrument of your choice and put you  on the cover of Rolling Stone—afterwards they try to charge you 30 bucks—I opted to just download it on my blog: 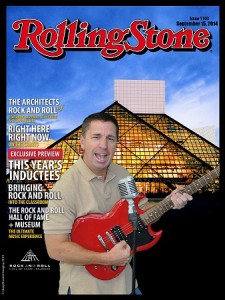 Pretty Cheesy…yet fun. Lots of highlights in this place where they have several displays, some great documentaries to check out and then you have the loads of memorabilia. Sure you had the fan favorites….like Michael Jackson’s signature item: 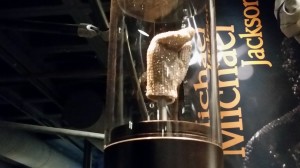 But my favorites were things I didn’t expect—like who knew that Jimi Hendrix’s favorite pastime as a kid wasn’t playing guitar, it was drawing pictures of his favorite football teams. 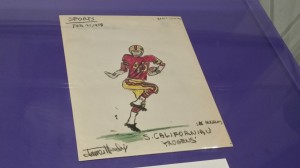 He was a big college football fan–who knew? On another note—who knew Jim Morrison was such an accomplished Cub Scout? 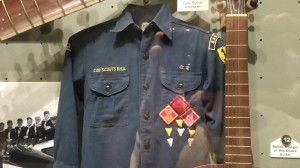 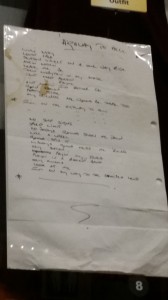 Just some of the highlights from a place I highly recommend and enjoyed much more than I planned. You could easily spend two to three hours there and it would fly by. Cleveland Rocked!

NOBODY ASKED ME, BUT: Being a Hall of Fame voter isn’t always easy and the Canton Crew will have a tough call in a few years when it comes to Devin Hester. He of course passed Deion Sanders as the NFL’s All Time Return man with his 20th touchdown via another punt return for a score. There is no doubt, he is the best return man in league history but unlike Prime Time –Hester was primarily just a return man. Sure he’s been a decent receiver but nowhere near the caliber of cornerback that Sanders was.

Punter Ray Guy was finally inducted last year which may have opened things up for Hester but being one dimensional may prolong his entry. I still claim besides hitting a baseball that returning a punt may be the toughest thing to do in sports and Hester made it look easy. That said if he was more well-rounded, it would be a much easier decision—this will be one of the tougher calls for the voters ….ever.

EXTRA POINT: Parade Magazine had an interesting survey about “What America Eats“. The survey revealed Ice Cream remains our favorite treat, 53% say on the “five second rule” it “depends on the item. On the most famous person you would invite over for dinner—Ellen DeGeneres edged the Pope—-only in America….