You can’t predict the future….. with a few exceptions. 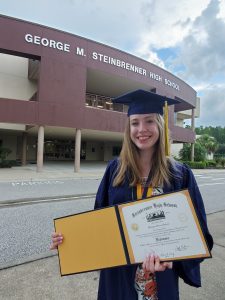 This corona crazed graduation left my oldest daughter Morgan and her classmates only a few seconds to do the following: get out of the car, hear their named called, take a quick picture with the principal and then return back in the car.

I’ve honestly had car wash’s longer than that. It’s a shame.

On the drive in, Morgan commented that it was like going through a drive thru and she was on the money as this is exactly what the experience felt like for her 2020 class.

COVID-19 has been unfair to so many but for weeks I’ve felt so much sympathy for so many kids who should be enjoying their final months of high school. Man, I loved those days. The endless rights of being a departing senior were all taken away without much warning. No prom, no pomp, no circumstance and no graduation.

For the class of 2020, a normal graduation ceremony was the ultimate tease. It was supposed to be in May, maybe in June, but certainly in July right? 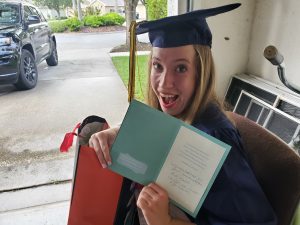 I remember when Morgan was born in February of 2002 I wondered many things about my firstborn. What will she be like?  What will she sound like?  Way down on the list of early curiosities I thought, wow that’s gonna be cool that she will graduate from high school in 2020?! It had a nice ring to it.

It seemed so far away then yet seems so unfair now, you just never know what life has in store for you?

The good news for the Class of 2020 is you didn’t have to wait long for your name to be called, the ceremony was quicker than getting a Big Mac.

The big picture though is this class will never be forgotten and will always stand out for enduring what no other class ever had to. 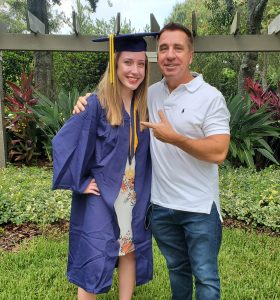 So unfair…..yet my daughter never complained. I’m as proud a Dad today as when we noticed she would be in this unique class back in 2002 but we had no idea how unique they would truly be…..

My ode to the Class of 2020 our first stop in another jog around the Naborhood, as always thanks so much for stopping by.

CRENSHAW’S FORTITUDE: Lately it’s hard to watch the news. It’s repetitive and the majority of it is bad which mirrors political coverage we’ve seen for years. It’s hostile and it’s rare to see an objective relatable discussion.

The outlier recently was an interview on HBO’s Real Time with Bill Maher when Maher who leans way to the left had conservative congressman Dan Crenshaw on. Maher peppered Crenshaw with several critical questions yet Crenshaw dismantled him by not raising his voice once and repeatedly retorting with hard facts.

If this was a boxing match, Crenshaw squarely knocked Maher out in the early rounds. Now, I pride myself in being a moderate so this exchange was interesting to me because it was so rare. No verbal jabs, no insults, no screaming, just Crenshaw making his points with class and knowledge.

It motivated me to buy his new book, Fortitude (American Resilience In the Era of Outrage) which is a great read whether you are a Democrat, Independent or Republican.

Crenshaw’s story is compelling, only 36 years old, he lost vision in one eye during the war in Afghanistan fighting as a Navy Seal but didn’t let it slow him down where came home as a military hero and preceded to get his Master’s Degree from Harvard and then was elected to Congress in Texas last year. He knows about Fortitude.

The book however includes much more than politics and Crenshaw’s military service, it’s a great testament to grit, mental toughness and battling the outrage culture which is such a growing dynamic in this country on many fronts.

The book makes you think about we handle a variety of situations from forming opinions without knowing all the facts to being calm in situations when often many get angry. The best example of this was Crenshaw’s reaction to a Saturday Night Live skit where on the Weekend Update host and SNL comedian Pete Davidson made a joke at Crenshaw’s expense. Instead of getting angry or firing off a knee jerk tweet on social media, Crenshaw waited, accepted an apology from Davidson and ultimately was asked to be on the show where he certainly got the last laugh.

I may not agree with everything Crenshaw writes or stands for but I appreciate the premise of a book which I highly recommend. Lots of great lessons here from the author who quotes a Harvard professor who said while Crenshaw was in school, “While you’re here, try hard not to offend, and try harder not to be offended.”

Good advice for all of us moving forward.

GARTH BROOKS DOC: Haven’t had much time to binge watch of late but my Netflix pick of the month was Garth Brooks documentary, “The Road I’m On,” which was great whether you like country music or not. Admittedly, I’m not a huge Brooks fan, could probably only name two or three songs before watching this but after seeing both installments, came away really appreciating his journey and most importantly his passion.

I love people who follow their passion and Brooks certainly did that. Will always appreciate Jerry Seinfeld who admits he would have been content just being a standup comedian because that was his dream. Brooks’ dream was to be a country music star where this doc revealed so many great stories about how he grinded his way to be a star, make it to the top and then took off years to raise his girls after a tough divorce. Admirable at many levels.

The story that sticks out to me was Brooks saying when he heard George Strait’s song, “Unwound” in the car with his Dad growing up, he knew that’s exactly what he wanted to do with his life. To his credit, Brooks did it and did it big.

I’ve seen some reviews who say Brooks cries to0 much and is a little over the top with his emotions in this doc, I couldn’t disagree more. It was real and the journey was emotional ending in over the top success–Brooks should be proud and not have to apologize to anyone.

REGIS TRIBUTE: There are some people in life that nobody says anything bad about, you know like Regis? The man who was universally known by his first name passed away at the age of 88 this week. For many years, you couldn’t watch TV without seeing Regis, who holds the Guinness Book of World Record for the most hours on U.S television. The grand total was an amazing 15,188 hours which is the equivalent of averaging one hour a day in his successful 50 year career.

Regis was loved by everyone. David Letterman said he was his favorite guest as seen by Regis being on Letterman more than anybody. Howard Stern said he was a great neighbor where once upon a time in their New York apartment complex. He appealed to a variety of personalities.

Sure he rose to national fame with his morning show with Kathy Lee but I always enjoyed Regis on “Who Wants to be Millionaire” just another show and more hours for the man known as “the hardest working man in show business.”

RIP Regis, we will all miss you.

NOBODY ASKED ME, BUT… We said goodbye to Regis this month as well as civil rights icon John Lewis. Its amazing Lewis died at the age of 80 but think about his life the past 50 years? It began in his early twenties speaking in Washington D.C before Martin Luther King where decades later he was elected to Congress a post he held to his death. A remarkable life.

Lewis’s legacy is an amazing one where as a teenager he wrote King asking to become the first Black student at his local college which prompted a meeting and life as an incredible leader for so many.The man King called “The Boy from Troy” organized sit-ins at white’s-only lunch counters, he volunteered as a Freedom Rider and endured countless arrests and beatings.

Recently I saw a great documentary on one of the best NFL defensive players ever in Alan Page. He was much more than the first NFL “defensive” player to be an MVP. Page was a lawyer, a judge and a civil rights leader in his own right.

I found it very interesting that Page has several items of Jim Crow memorabilia in his Minnesota home. These items include those connected to the KKK and Slave trade along with “Colored Only” and “Whites Only” signs. Why does Page have all of this in his home?

“It puts in context what we’re seeing today,” he said. “We have to confront it. We have to have conversations about it.”

Page is right and John Lewis would agree—what an incredible 80 years of fighting the fight, a rare man indeed.

EXTRA POINT: Hey you fans of Publix, if you haven’t tried it, you need to check it out…..

……on a “limited basis” one of the best things I’ve ever had “Mango” flavored Lemonade—-get it while it’s hot folks, you won’t be disappointed?! (Maybe this is a sign, I need to get out more…something we all can relate to).