We’re all in this together so I’m guessing we all have run the gamut of being anxious, upset, impatient and downright stir crazy.  It’s normal and natural in these unnatural circumstances.

I’m not minimizing what anybody is going through during this because “this” is tough on us in different ways. 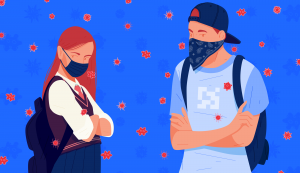 With that said, I hope you’ve had a chance to take some time away from the stress and soak in a moment that makes you both forget about COVID-19 and remind you of what is good in your life.

I had that moment this month……

Not having sports hasn’t bothered me as much at I thought as I’ve tried to take advantage of some newfound spare time either by introducing my kids to classic movies, catching up on my reading or fixing odds and ends around the house.

A sporting event which was so special ESPN selected it to fill the void on a Monday night during corona crazy April. 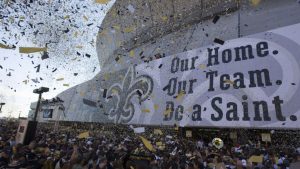 It was easily the loudest I’ve ever heard a crowd in any sporting event I’ve covered where the loudest cheers came early as special special teamer Steve Gleason blocked a punt which set the tone for the Saints blowout win over the Falcons. Some say that was the biggest play in the history of the Saints…hard to argue. 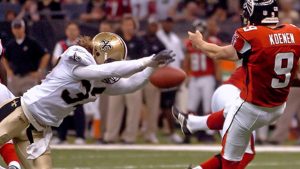 I’ll never forget that night where I hadn’t seen a replay of the game until this month.

What stuck with me watching this during our current corona craziness is how I should count my blessings. 14 years ago, I never would have thought 14 years later I would still be covering this franchise. I would have never imagined back then that the Saints would become one of the best teams in the NFL, win a Super Bowl, repeatedly flirt with many more and feature a great run of doing a postgame show with Drew Brees after each game. Back then, thoughts of Brees being a future Hall of Famer may have been laughable.

That night was fun texting and tweeting with many players in that game who have become both friends and co-workers—it was special knowing them now and seeing how young they were then.

It was sad yet inspirational watching Gleason being the hero yet thinking about how for much of his life since then he has admirably fought ALS as hard as he rushed that Falcons punter that night—a special man. 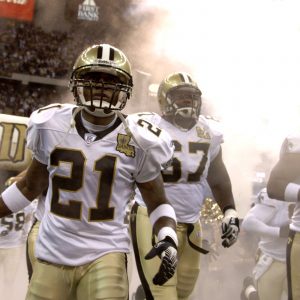 For me it provided hope of what is to come the next 14 years as you never know what opportunities life has in store for us–this served as my Corona reminder. How many times do we look back at our lives and wonder what is next never knowing all the good things that are around the corner?

We should have that mindset now.

This pandemic won’t last forever–let’s relish what’s been good to us in the past and let that serve as motivation to plan all the great things we can accomplish when it dies down over the next few months. (hopefully)

Sure we all want to go to restaurants, concerts and sporting events again but that will come. It’s admittedly frustrating for many of us who own businesses not knowing what the future holds or watching many kids not get to soak in their senior years— but try once in a while to step back and put this pandemic into perspective.

Hopefully you’re enjoying your own reminders.

I appreciated mine, an unforgettable Monday Nighter in New Orleans—a therapeutic replay worth watching again.

Some needed pandemic perspective— the first stop in another trip around the Naborhood, as always thanks for stopping by.

TALKING TO STRANGERS: Speaking of catching up on my reading,  I just finished another gem from my favorite author, Malcolm Gladwell. He has the rare ability to tackle subjects in his own way as seen in books such as Outliers and Blink. His latest “Talking to Strangers, what we should know about the people we don’t know” keeps in the theme of his introspective study of people and relationships. There is no writer like him.

The book delves into how we communicate with those we don’t know and better yet those we think we know. What makes Gladwell’s books great is the wide range of case studies he employs to prove his overriding theme. 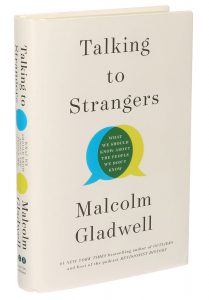 For Strangers he incorporated the likes of Fidel Castro, Jerry Sandusky, Bernie Madoff, Amanda Knox and the TV show Friends. All were pertinent examples of how often we think we know someone but have no idea how honest they are. It goes both way as sometimes we think the strangers we encounter are dishonest when their intentions are just misunderstood.

Gladwell’s major theory was “defaulting to truth” where we often assume the best in people only to be fooled. He gave several instances of CIA agents who were mislead by foreign officials and offered up an interesting dynamic between former British prime minister Neville Chamberlain who was repeatedly deceived by Adolph Hitler after what he considered a series of productive meetings.

Gladwell doesn’t mention social media in this book but Talking to Strangers provides a classic foundation for understanding it. Often many of us think we know what’s going on in others lives online but usually we are merely defaulting to truth—this book was great in that regard and in many other areas—I highly recommend it!

SAINT JAMEIS? As a journalist, I like many others have my hits and misses on stories. I thought Johnny Manziel would be a fun NFL quarterback to watch and NEVER saw Tom Brady playing for the Bucs–wrong and wrong but I was right on Jameis Winston going to the Saints.

Over a month ago I did several local radio shows in Tampa talking about how I thought the market would be thin for the former Bucs quarterback and the Saints would offer him the best opportunity to be a backup where it’s apparent Winston and New Orleans agree. 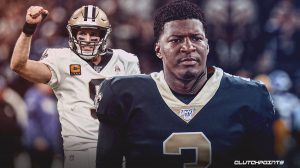 After supporting Winston as the number one overall pick of the Bucs, I have been critical of his subsequent careless play on the field and his reckless behavior off of it.  I think going to the Saints, learning under Sean Payton and being mentored by Brees could turn his career around. The best case scenario may be to just sit out the whole season, take a deep breath and soak all this knowledge in. He’s been the “guy” his whole football life, sometimes you need to watch the game to improve your game.

Credit Winston for taking a severe pay cut and understanding what this opportunity may bring but if something happens to Brees this fall (if there is football) and Winston comes in to play against the Bucs and Tom Brady–grab your popcorn folks!  When the Bucs signed Brady, Winston posted on social media that he would “see you at the Super Bowl” —does that mean the Saints and Winston will playing in it in Tampa—stay tuned…?

OZARK > TIGER KING I tried, I really did but sorry folks just didn’t absorb the Netflix pandemic sensation Tiger King? I didn’t like any of the main characters where Joe Exotic was just incredibly annoying and then you had his rival Tampa’s own Big Cat Rescue founder Carole Baskin. Watching her reminded me that I met her years ago working with a former client. She seemed nice back then but this show reminded me of the aforementioned “Talking to Strangers” book that maybe I “defaulted to truth” as she seems pretty shady now. I just didn’t get this show at all….. 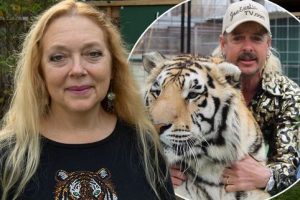 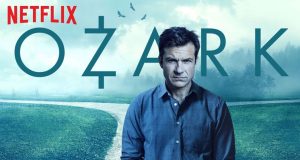 For those who are with me and haven’t seen Ozark, I encourage you to binge watch. Jason Bateman directs and stars in a show with a lot of shady characters too but at least this is fiction! I think it’s the best series Netflix has produced since Breaking Bad where the writing and acting is superb. If you put the two heavyweights together Ozark wins in a knockout.

NOBODY ASKED ME, BUT.…. Oh that Michael Jordan he sure knows how to always capture the moment. When his Bulls needed him the most he was there and now he’s there for all of us. ESPN’s docu-series “The Last Dance” which profiles the Chicago Bulls dynasty with of course his Airness leading the way is one of those series where you watch for two hours and you easily want two more hours. 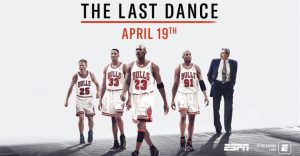 Jordan left the court back in 2003 which was a year before social media started to become relevant in our country. When he played, no camera phones, no Facebook, Twitter or Instagram—you wonder how his career would have been characterized differently? You know Jordan’s behavior with his teammates, his foray into baseball and his retiring and un-retiring would have picked apart online by fans but he escaped all of it.

Jordan has a knack for timing and the release of the “Last Dance” is perfect as it coincides with a nation starving for sports content. When he played, Air Jordan was always the main man so it’s fitting he is again—just like Jordan, this series is an elite production—I can’t wait to watch the next episode.

EXTRA POINT: There is no doubt sports is hardly a top priority these days but I give the NFL credit for rolling with the current times. They haven’t skipped a beat in regards to free agency and their latest draft. It was amazing to watch the job both the league and ESPN did maneuvering the many zoom feeds all around the country for a seamless production. 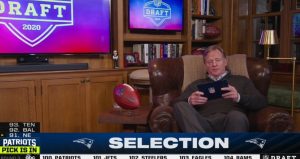 It was proof we can adjust during this pandemic where the only glitch came via NFL commish Roger Goodell who botched names and dates all throughout the broadcast?  At one point it looked like he was going to fall asleep in his basement? Always odd behavior from the commish but credit the league for delivering and being flexible—hopefully others will take notice.