If you believe in those Football Gods then we can confirm Peyton Manning is their starting quarterback.

After batting bumps, bruises, even a benching–give the Sheriff credit for making his final game as legendary as his career.

Let’s face it former Bronco Tim Tebow could have been under center with that Denver D and the Broncos would have beaten the Panthers but that won’t matter in the history books.

A single win gives Manning so much— two Super Bowls, a record 200 wins, gets him over the hump lifetime in the playoffs (14-13) and eliminates (for now) any bragging rights for Eli at the dinner table.

Not a bad night’s work…. 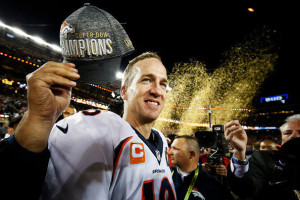 Everything hasn’t always gone to script–see the Heisman Ceremony (I still think Charles Woodson deserved it)  and his time against those Florida Gators–but this NFL ending was Peyton Perfect.

In a country where we criticize everything, most people like Peyton Manning. He isn’t the best quarterback of all time but is certainly the most likeable.

Not a better pitchman in the history of sports right down to his last sound byte. Gotta love, “I’m gonna hug the wife and kids, say thanks to the man upstairs and oh yeah drink a lot of, wait for it…Budweiser!”

Everybody loved that one except my Craft beer friends……. 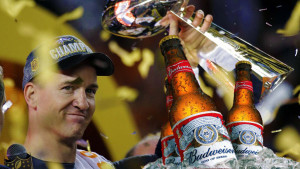 The man will never have to buy a brewski again in Indianapolis and Denver and now made sure his fridge will eternally be stocked with an endless supply of free Anheuser Busch products.

Keeping a running tally on brand recognition at the game, sponsorship analytics group Apex MG Analytics said just one mention by Manning was worth about $1.6 million for Budweiser, meaning the beer-maker benefited to the tune of $3.2 million for those two mentions:

Budweiser sent 50 cases — 1,200 bottles — to the Broncos after party, according to ESPN.

The man is a genius.

Before leaving his Super Sideline who was the first man Peyton hugged?–ole Papa John himself. 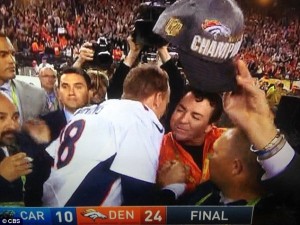 I’d like to think that if I was Peyton Manning, I would have taken it a step further.

“I’d like to thank my family, my teammates, Southwest Airlines, National Rent A Car, Hilton, and Budweiser,” —gotta cover all the bases folks.

Pitchman Peyton our first stop in a Super Sized vault around the Naborhood, as always, thanks for stopping by.

STAY CLASSY CAM: Few things really set me off in sports anymore but there are a few exceptions like Cam Newton’s brief meeting with the media after losing the Super Bowl. 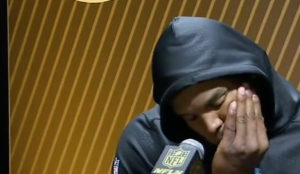 I don’t care that he lost the biggest game of his life. YouTube Russell Wilson‘s post Super presser last year where after throwing the game losing pick, he was all class. Wilson and Cam are around the same age–Newton is more athletic but the Seahawks QB is clearly more mature.

I don’t care that he is an emotional and competitive guy. You take the good with the bad—if you Dab after every first down, you need to face the fire during the tough times…..

I really don’t care that Denver cornerback Chris Harris was set up next to him in the postgame area saying the Broncos were forcing Carolina to throw the ball—be a big boy Cam–you can’t act that way. He was unprofessional even before Harris started churping next to him. 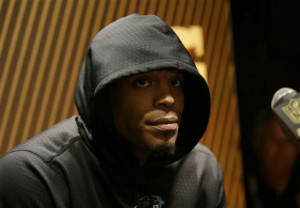 Many network analysts like ESPN’s Trent Dilfer and Chris Carter awkwardly defended Newton which was disappointing, I thought the NFL Network’s Deion Sanders put it best when he said Cam is the MVP of this league, he can’t represent the brand in this fashion. Prime Time was on the money.

It was a bad look and you hope he learns from it. You wonder if all those kids who collected footballs from Newton after every score this season–what did they think when they saw their hero not pounce on a fumble and then fumble his post game press conference?  A bad look for a Panther who wants to be a role model. He lost more than a Super Bowl on this Sunday. Time to grow up.

TO’s TRAVESTY: While Newton has a long way to go to find himself in Terrell Owens territory, it’s ridiculous that TO isn’t a first ballot Hall of Famer. He should have been one of the headliners of this class.

For everything I just wrote about Cam Newton and just like Pete Rose in baseball—I really don’t care what you do outside the lines—if you are one of the best to play the game, you deserve to be in the Hall of Fame. It’s not a popularity contest, it’s a production contest. 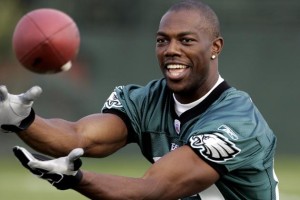 Let’s break down the competition in this year’s class—WR Marvin Harrison finishes with 25 less touchdown catches and well over 1,000 fewer receiving yards–yet he gets in over TO?

Tony Dungy gets in yet he had a losing record in the playoffs and only one Super Bowl ring? While I think Harrison is a Hall of Famer, I’m not sold on Dungy’s resume. Hall of Fame person? Yes

Many HOF voters claim they didn’t elect TO because in his prime he wasn’t a popular player? Bogus–the man produced and should be in.

SUPER MUSIC: In this day and age of social media–what is it gonna take for anyone to like any halftime show? I feel if Billy Joel teamed with Ray Charles and Elton John—the masses would complain.

Sure the Black Eyed Peas and those Katy Perry Sharks may have deserved it but I think we’re getting a little overbearing here…. 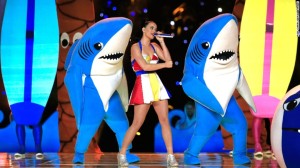 Coldplay is the latest halftime punching bag where you would have thought these guys were American Idol rejects by the reaction on Twitter and Facebook.

It seems it’s almost cool to hate Coldplay which I don’t really get. I wonder if many of the haters are just followers…..

Interesting combo throwing in Beyonce and Bruno Mars as I think the Coldplay crew could have done it by themselves but the combo worked and I didn’t have a problem making it a collaborative effort. 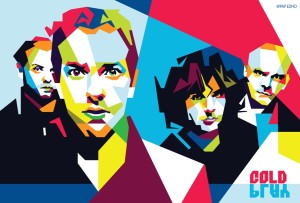 Lady Gaga—you were fantastic by the way, a close second to Whitney Houston for the best Super anthem of all time.

It’s interesting with so many tragic music losses lately, I saw an interview with the late Glenn Frey on how he and the Eagles never wanted to sing the national anthem because in his words, “Its the hardest song to sing.” Food for thought next Super Sunday.

BILLIONS : I am so far behind on so many franchise Netflix shows. I really want to get into Breaking Bad and House of Cards just to name a few. 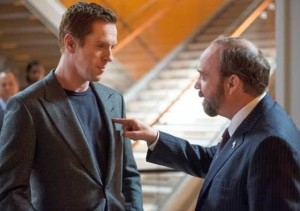 I’ll see anything Paul Giamatti is in as he plays U.S Attorney Chuck Rhoades who according to the script has never lost an Insider trading case.

Rhoades goes at it in Billions against Bobby Axelrod played magnificently by Homeland’s Damian Lewis.

Interesting dynamic in this show is Rhoades wife works for Axelrod as his company’s psychiatrist—I can’t wait for the next one.

NOBODY ASKED ME,BUT…Can we agree we all have run a red light before? It happens to all of us but what I hope happens very soon is that we can put a stop sign on those ridiculous red light cameras.

Time to turn a green light on stopping the red light madness…. 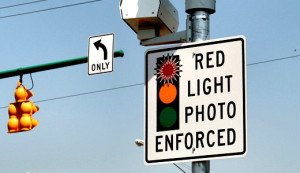 I was nabbed by one a few years ago–actually appealed it and lost. The courts told me at the time the cameras may not be a long term answer but yet they are still active in many counties in my home state of Florida.

My main problem with these cameras is that they are more of a cash cow for local governments than a measure to improve safety. It’s a fact when they started implementing this nonsense– yellow lights were shortened and many of the fines were from the always iffy proposition of those right hand turns.

According to the Tampa Bay Times, Temple Terrace which was the first community in Hillsborough county with cameras gave out 22,166 citations in its first 13 months–20,671 were for right hand turns??!!

St Petersburg eliminated the red light cameras and so did many other local areas—its time for everyone else to join suit.

EXTRA POINT: Peyton Manning’s legacy didn’t change for me winning his second Super Bowl. He is still the fourth best QB of all time behind Brady, Montana and Elway…..