The odds are better for me to be a starting left tackle in the NFL or even better having me suit up as a center in the NBA– but the attraction remains “power”ful anyway.

We’re talkin Powerball fun folks where the odds are long but the payoff would cut short many of our worries…or so many of us think?

I’ve never been a big Lottery guy but when the big prize reaches the Billions—you gotta go for it…. 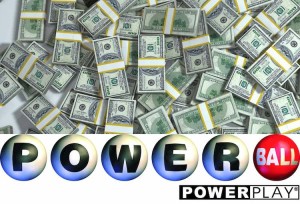 Like many of you I took the two to three dollar plunge–no multiple tickets for me, but the anticipation of bigger bank accounts forced many of us to play the lottery game and the always complementary  “what if” game?

What if you actually won?

Believe it or not, I would actually not quit working but the Powerball bonus would have made work A LOT more fun.

Instead of being a reporter, I think along with giving myself a hefty pay raise, I would put together my own regional sports network and hire all of my favorite people who would also be making ALOT more which would make for a much happier newsroom which is rare these days.

I would surely take care of my children first —college would be paid for and pretty much everything else. I would also take care of the rest of my family–that would be a lot of fun.

No more bills, house would be paid for and maybe a few upgrades with those automobiles in the driveway.

May have to help out my cash strapped Tampa Bay Rays–possibly become a minority owner and give them some extra cash so they can finally pick up a few big bats in the lineup which would allow them to keep all of those young pitchers.

I work with a lot of great charities and nonprofits so they would be taken care of and would have to tip my man at the 7-11 who promised me I was getting the winning ticket.

I’m such a sucker. 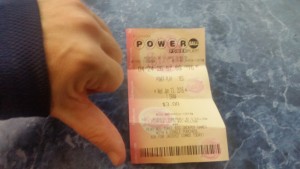 Sadly all of the above is merely a pipe dream now. My power trip is history as is yours— time to get back to reality where I’m gonna take you on a billionaire free trip around the Naborhood, as usual, thanks for stopping by.

IT’S “MOSTLY” ALL ABOUT THE QB: Wow college football fans won the lottery watching this year’s National Championship game. What a fantastic few hours of football where the whole time I’m thinking for most of the College Football universe —its all about the quarterback. 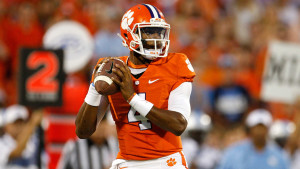 Clemson has been good for years but with DeShaun Watson they are now great and should be even greater next year. Think about it, the QB elevates all the recent champs–Auburn is worlds greater with Cam Newton, FSU won it all because of  Jameis, Florida had Tebow time, Ohio State had three great quarterbacks but the unbelievable exception to the rule has been Alabama.

Jake Coker, AJ McCarron and Greg McElroy were good not great—the greatness lies in a head coach who unlike his peers wins with good not great signal callers—remember he won his first title with LSU with Matt Mauck for crying out loud.

KING SABAN: Bear Bryant was a legend, Barry Switzer was a more than Solid Sooner, Jimmy Johnson  made the Hurricanes nearly untouchable and Tom Osborne was a sideline silent assassin  but there is no doubt Saban was better than all of the above, he is undoubtedly the best college coach…ever. 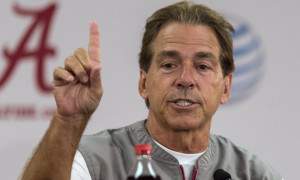 (5) MEYER–Urban still has time to possibly catch Saban and like Nick has done it at two schools in an era where that is nearly unheard of.

The lack of scholarships, the rise in competition, the increased TV revenue along with the added media and social media pressure gives the Alabama Head man the edge over every other great coach in college football history. He is winning despite all the recent hurdles just like Belichick defies logic by continuing to dominate his NFL peers in the salary cap era.

Ironically Clemson Head Coach Dabo Sweeney who coined the phrase BYOG (Bring Your Own Guts) saw Saban bring plenty at the NATI with a gut wrenching game changing onside kick which could have blown up in his face but instead gave Alabama the needed edge to pull away from a Tiger team which will likely be the preseason number one team in the land next season.

With many untested coordinators topping the landscape of NFL Head Coaching Vacancies, if I were the Bucs, Niners or Giants I would do anything to bring St Nick to the pros. People say he was a bust in Miami but the truth is he had a winning record his first year in South Florida and if he would have had his way, Saban would have signed Drew Brees over Dante Culpepper and can you imagine how our football life would be different these days? Significantly….

MY FAVORITE COACH: Speaking of A Football Life, the series on the NFL Network for my money is the best sports TV out there. The series of documentaries produced by NFL Films spotlights the most interesting personalities in NFL history. 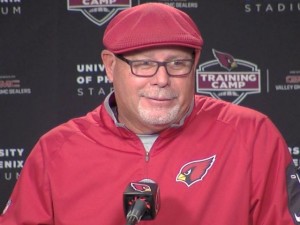 I’ve seen all of them and my favorite is on my new favorite coach, the Arizona Cardinals’ Bruce Arians. His football life is different than most—he has been fired countless times, was kicked off his high school football team but his Forrest Gump like resume includes rushing for more single season yards than Michael Vick as Va Tech’s quarterback. He worked for Bear Bryant and has been quite the QB whisperer to the likes of Peyton Manning, Ben Roethlisberger, Andrew Luck and most recently Carson Palmer.

Despite being NFL coach of the year two of the past three years, Arians was passed over countless times but besides the hoodie in New England, may be the best coach in the league. His rise to the top is inspiring and his personality is rare—he’s as funny as Rex Ryan but actually backs up the big talk. Wish they were all like Bruce Arians.

STAND UP KICKER: Nobody personifies the life of a kicker more than the Vikings Blair Walsh. He’s been an All-Pro but most will remember the misses more than the makes.

Walsh had been brilliant for the Vikes in the modern day version of the Ice Bowl vs Seattle but saved his worst for last by missing a cheap shot badly to give the Seahawks the kind of last second reprieve they gave the Patriots in last year’s Super Bowl. 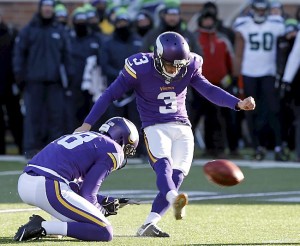 Walsh may have been the goat but I’ll give him credit for being a stand up kicker afterwards. He faced the music answering EVERY question. I remember Walsh missing not one but two HUGE overtime kicks in the Outback Bowl when he was with Georgia and he answered all of our questions back then too. Impressive and rare.

A first grade class in Minnesota took notice of the beleaguered kicker by all coming together to write him notes—kind of get well cards.  It was the idea of their teacher who ironically was a Seahawks fan. 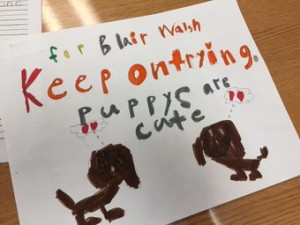 “Dear Blair Walsh,” wrote one student. “I know that it can be hard to get through things that are sad. but you have to try and try again. Everyone makes mistakes sometimes. One time I made a mistake when I was doing a cartwheel. I felt embarrassed. You can still help the Vikings win the Super Bowl next year. Your fan, Sophia Doffin.”

Great stuff and while we’re on the subject of kickers—here is proof you can bet on anything. From my friends at sportsbettingdime.com, these are the Odds of the following kickers missing a game-winning field goal attempt in the final minute if they have the chance in the rest of these NFL playoffs.

SUPER TAILGATING IDEAS: The Super Bowl is merely weeks away and here are some great ideas for your big party…….

(Or customize a tin with your favorite high school or college football team’s logo…or even show off your kid’s peewee team!) 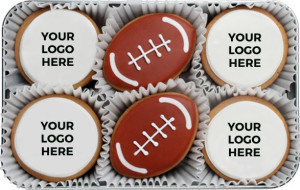 My friends at Eleni’s will give you any team you want for you Super party!

or visit ELENIS.COM at check out this link

Another super suggestion comes from my friends at Big Mouth who will give you the most creative fixtures not only for your Super Bowl party but you can use these for tailgating as well. Here is a sample:

How bout this inflatable football cooler? Use it in your pool or the back of your truck or throw it in a cooler.

Or the creative football stadium inflatable salad bar. These are just some of the great tailgating or Super Bowl party products Big Mouth offers.

For more check out: wwwbigmouthinc.com. Their Super Bowl party line is also available on Amazon.com and at Walmart and Target.

NOBODY ASKED ME, BUT….For some reason and I don’t know why when it comes to the NFL playoffs I’m thinking things are gonna break for Peyton Manning. He has had time to rest his injured foot while the New England Patriots seem to be too banged up for a run at another title. Kind of has that Cinderella feel —the ole veteran gets hurt watches the young quarterback play well and then comes back late to make a run. Like Elway in his late years, Manning doesn’t have to do it all, his supporting cast can carry the load.

I think Peyton and the Broncos win the AFC but unfortunately have to meet a Panthers team that has the best QB in the NFL in Cam Newton. It’s amazing what he’s done this year without much support on offense.

Give me the Panthers over the Broncos in the Super Bowl which would leave the only team left in the NFC South without a title would be those Atlanta Falcons….

EXTRA POINT: I don’t have a problem with the Bucs firing Lovie Smith who had a worse record than Greg Schiano and Raheem Morris in two years in Tampa, but they better hope Dirk Koetter is the next Bruce Arians…..

EXTRA EXTRA POINT: The Baseball Hall of Fame should let Barry Bonds in but let’s keep Clemens, McGwire out and forever Sosa and Palmiero. Bonds was a Hall of Famer before the PED’s but my biggest head scratcher is how Jeff Bagwell finished fourth in the voting while Fred McGriff finished 13th—the Crime Dog had 44 more home runs and more career RBI….