I used to kid her that there must be six Carley McCords— she was everywhere.

On the sideline, on the Jumbotron, on the local news, covering the NBA and the NFL seemingly simultaneously. 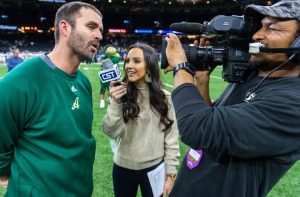 Tragically a plane crash now has left us not seeing Carley McCord at any of those familiar places which is hard to comprehend.

She was only 30 years old and like many that age had her whole life ahead of her but McCord was different than most in our business and most of her peers for that matter—she was mature beyond her years, and had an unusual passion—-she wanted it and you could see it in her work.

But that wasn’t her best quality…..

Carley was real. I never saw her meet a stranger and when you talked to her, she really seemed to care and show appreciation for your work—she was authentic. I sincerely noticed it the first time I met her after watching her on the same network we worked for for years.

Her sudden death makes you ask why? Why her? Why now? Why do these things happen to good people?

2019 saw me ask that question quite a bit as I lost my father and a dear friend and client but they had both lived a long life, Carley’s was just starting, it’s mind-numbing. 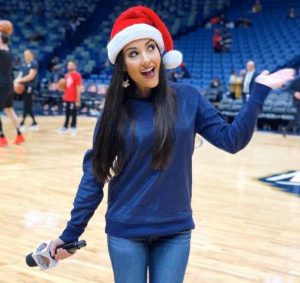 Losing someone is never easy especially when they are taken without any warning. Her father in law, LSU offensive coordinator Steve Ensminger found out the news right before he had to coach the College Football Playoff Semifinal game?

We never know how people feel about us when we leave this world but I hope Carley can see how she was loved, respected and appreciated. Carley’s approach is one many young reporters should pattern their careers after—-she worked hard, was in the business for the right reasons and I never heard her complain.

As the father of two teenage daughters, I can’t imagine the pain her family is going through and my heart is out to them for all they must be going through. It’s hard losing any loved one but to lose them in a blink of an eye—-it’s unexplainable.

Remembering Carley, the first stop in this trip around the Naborhood, as always thanks for stopping by.

MR ROGERS’ MOVIE: Fred Rogers passed away nearly 17 years ago but recently he has undergone quite the renaissance.

A year ago his documentary, “Won’t You Be My Neighbor?” was a hit with the critics and audiences where it grossed over $22 million, becoming the top-grossing biographical documentary ever produced and the 12th largest-grossing documentary of all time. 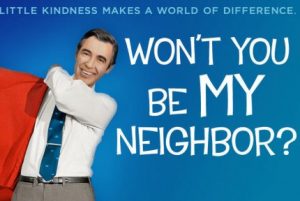 Lately, if you’re looking for a great movie (frankly for all ages) check out A Beautiful Day in the Neighborhood which isn’t centered solely on Rogers, it surrounds the impact he makes on people specifically cynical Esquire writer Lloyd Vogel.

Vogel was assigned to write a simple and short 400 word story on Fred Rogers, but after spending weeks with him ended up making it the cover story. The movie shows Mr Rogers didn’t just impact kids, he impacted all ages. 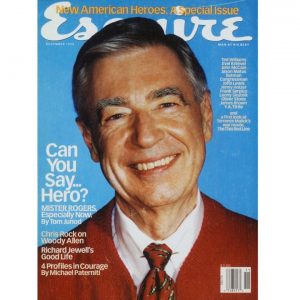 Tom Hanks was the perfect actor to portray Rogers (wh0 can Hanks not portray, what a talent). For this role Hanks deservingly is nominated for a Golden Globe and the movie was chosen by many outlets such as Time magazine to be one of top ten films of the year. It’s different and maybe not what you expect, kind of like Fred Rogers at a lot of levels. 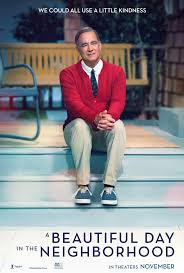 As a kid, Mr Rogers was my guy yet even my open minded Dad admitted to be later that he was an acquired taste. Nobody had ever seen his kind of approach and frankly wondered if it was authentic? I think I would have felt the same way he did at first. All these years later, Rogers has staying power as there really has never been anyone else like him in the way he communicated and had a great feel for people especially those little people.

With all the hate, all the peer pressure on social media and frankly the lack of face to face communication in our tech based society—Fred Rogers is needed more than ever. It’s good to see even though he passed many years ago, his movie will keep his approach and his messages alive.

NFL LISTS: I for the record am a big fan of lists, especially in sports. I remember when the year 2000 rolled around and ESPN unveiled their best athletes of the previous century, it was fun and sparked all kinds of debates.

The NFL is celebrating its 100th year and the NFL Network is producing several shows commemorating the best 100 players of all time. Many of the selections were easy ones as they narrowed it down to the top 10 at each position until they got to the best quarterbacks. 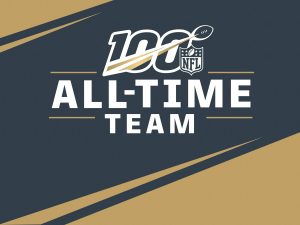 Now the challenge here is to include the best of the best from the pool of players from all of these generations but it’s tricky to compare those who played in the early years of the NFL compared to today’s league where the athletes are bigger and faster….which to me creates a problem.

Drew Brees is the NFL’s all time leading passer, has the most touchdown passes and is the most efficient QB in NFL history yet he didn’t make the top 10?

I don’t think Brees is the best of all time—I would put Tom Brady and possibly Joe Montana ahead of him so Brees is about third all time for me—undoubtedly a top five quarterback. 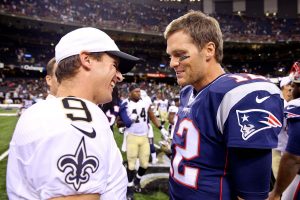 You can’t have Otto Graham and Sammy Baugh in the top ten over Brees?? It seems the voters are just trying to squeeze all the generations in without taking account of who really was the best?

Love lists but this one missed the mark in a big way.

NOBODY ASKED ME, BUT….Speaking of quarterbacks, I really enjoyed the Heisman speech from LSU quarterback Joe Burrow who seemingly can do no wrong this season. It was great for several reasons.

First and foremost, it was real. No notes just raw emotion which was extremely impressive. Burrow has been unflappable on the field and it’s carried over to the banquet circuit where he doesn’t seem effected by all of the attention, he seems humbled, which is refreshing.

The best part of the speech was the appreciation and the emotion that came from it—Burrow was genuine when talking about his teammates, his family and especially his head coach Ed Orgeron who took a chance on him two years ago. 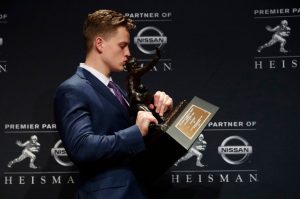 Burrow cried when talking about Coach O and his journey which he admitted the tears were out of character.

“That’s the most I’ve cried in 23 years of living,” said Burrow, who set an SEC-record with 48 touchdown passes and an NCAA record by completing 77.9 percent of his passes.

It was Orgeron who brought Burrow to the Bayou, who believed in him despite Burrow attempting just 39 passes in three years at Ohio State, who was forward-thinking enough to help his quarterback by bringing in Saints offensive assistant Joe Brady to LSU to revolutionize a passing game that needed to be upgraded.

“I didn’t play for three years, you took a chance on me,” Burrow said to him during his speech. “I will be forever grateful for you.”

Great stuff Joe Burrow—love stories like this and frankly surprised he isn’t playing Ohio State for it all—-it seemed the two were destined to meet–can’t wait for the Clemson game which should be a classic—as classic as his speech at the Downtown Athletic Club.

EXTRA POINT: What in the world do the Buccos do with Jameis Winston?? I think given what they have invested, they have to franchise tag him as the potential is there. I still maintain if Bruce Arians can’t fix the NFL’s first 30/30 man maybe no one can?

UNTIL NEXT BLOG,
Mike Nabors