Alright–I’m guessing we have all experienced this?  Flipping the now millions of channels we have on our respective cable systems when all of sudden it hits us—-the one show or movie that stops us in our tracks.

C’mon we all have our favorites right?? I always drop the remote when Good Will Hunting, A Few Good Men or recently The Color of Money hits my screen. But when it comes to sports Hoosiers is an instant remote tosser.

Hoosiers featured lots of Hollywood but the movie was based on the real deal. The somewhat true story wasn’t at Hickory High School and didn’t feature a player named Jimmy Chitwood—the real story was set at Milan High and the real life Chitwood was Bobby Plump. 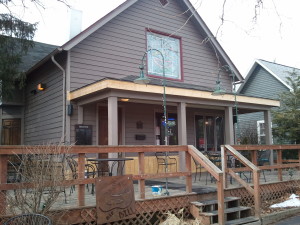 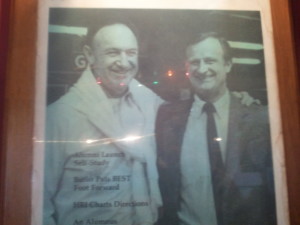 I didn’t go there for the food or the drink. I wanted to meet Plump but unlike Bobby—just missed my shot. I did get to catch lots of memorabilia from Indiana’s 1954 Mr Basketball through the years. Plenty of great stuff as you see. 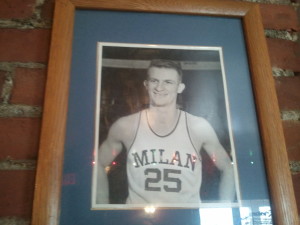 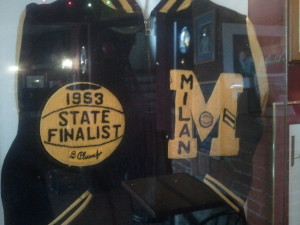 Hoosiers the gift that keeps on giving. One of many solutions to our daily cable crisis. Remote Tossers—the first of many topics in this week’s stroll throughout the Naborhood. Thanks for stopping by.

HAROLD RAMIS: Its very early in 2014 but already we have lost too many American treasures. First it was Phillip Seymour Hoffman and now Harold Ramis. Ramis is what you call a five tool talent. He could act, produce, write, direct and teach—–traits he performed for decades.

He was naturally funny yet by all accounts remained grounded. I saw a recent interviews, only a few years before he died where he was asked if he understood the impact of his legacy and being so famous? His response was in typical understood tone that he felt famous when he lived in LA “until Spielberg walked into the room, and then everyone flocked to him” 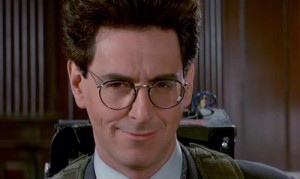 From Animal House to Caddyshack. From Stripes to underrated personal favorites like Meatballs and Back to School—Ramis gave us scenes that get quoted by all of us on a weekly basis. He even had recent hits where he played Seth Rogan’s Dad in Knocked Up where he had one of my favorite exchanges when he was trying to console Rogan on becoming an “unexpected” father.

Ramis “You’re the best thing that ever happened to me”

His scenes with Bill Murray in Stripes were my absolute favorites—especially those in the barracks with the likes of John Candy, “As you can see, I have a slight weight problem.” And who could forget “Don’t call me Francis??”

I was sad to read that Ramis and Murray didn’t get along after they shot Groundhog Day in 1993 mainly because Murray wouldn’t return his calls and became temperamental following his divorce. They did reconcile right before Ramis’s death. A departure which made me look back at a body of work which no one will ever be able to top—-I hope he left us knowing how much he was appreciated .

COMBINE DRAMA: I recently covered my fifth straight NFL combine which I enjoy but I’m always left with a rather empty feeling when its over. Its kind of like watching a movie but they don’t let us see the best parts. While the 40 times get all the headlines—the real action is in the interviews with the prospects and the NFL coaches and GM’s. Now how would the ratings be if they televised those??!—its why Gruden’s QB camp on ESPN has become so popular—its the closest we get to the real stuff. 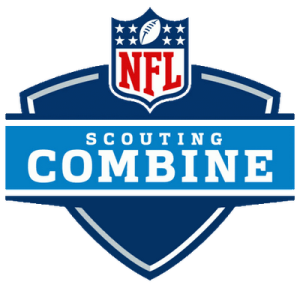 I really feel most NFL scouts and coaches don’t put a big priority on all the field drills unless they are out of bounds bad or good. They put a premium on the interviews. See how these guys tick in person. They want to know how smart they are and maybe most importantly—how much they love the game. With that said—here’s what I took out of this year’s combine crunch.

*MICHAEL SAM: I sat two rows in front of Sam for his combine presser, a media gathering which rivaled the likes of Tebow and Te’o. The combine has never credentialed as many members of the media as this years and covering Sam was a huge focus. I couldn’t have been more impressed. He answered every question with confidence, class and added a little levity which eased what could have been an awkward setting. 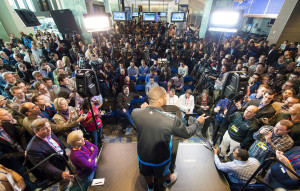 Sure his 40 time and field drills weren’t impressive but I give this kid a pass. He had a lot on his shoulders where he aced his press conference and I fully expect like Te’0, he will rebound with a strong pro day. I’m pulling for him.

*CLOWNEY/EASLEY: Some great athletes have big hearts and high motors but don’t come across that way in interviews with the media or with coaches. No doubt Jadeveon Clowney is a special athlete but his junior season made it seem like he didn’t love the game and mailed it in. Clowney admitted that he would have left college if he could have after his sophomore season (who could blame him??) but its hard to gauge whether he’s in it for the money —that’s why the interviews are so important and why the NFL scouts get paid the big bucks. 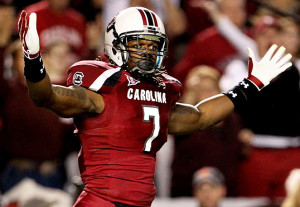 Speaking of heart, Florida’s injured defensive lineman Dominique Easley gave me an unusual revelation at the Combine. He tells me, he doesn’t like football, has never seen an entire NFL game and the most he’s ever watched is about two quarters. Easley added he prefers to watch cartoons—-not sure I’d draft that guy.

*MANZIEL: I have made it no secret that I think this guy is gonna be exciting at the next level. Its funny how Barry Switzer recently called him “a spoiled little prick” in one breath and followed up that beauty by saying he’s the most exciting college player he’s ever seen. I enjoyed talking to veteran Houston writer John McClain who has covered the NFL for decades and has followed Manziel closely. He and I both laughed at the hubbub over Manziel  being 1/4 inch shy of six feet. He feels the Texans should draft Johnny Football and I agree. I hope he doesn’t fall to the Browns or Raiders but would love to see him fall to the Buccos.

*MCCARRON: In a draft full of question marks, the former Tide quarterback leaves a lot to scratch your head about. After being a winner for the better part of his career, McCarron had a terrible bowl game, skipped the Senior Bowl and came off as a bitter young man at the combine. AJ —I get it, you feel disrespected but you can’t worry about this right before the draft. He gave off an attitude with the media and reportedly didn’t interview well with some NFL coaches. Along the way, he compared himself to Tom Brady—at the end of the day, the only similarity there may be a seventh round selection?

DALE-TONA: I’m not a big Nascar fan at all but remain an Earnhardt Junior fan. I used to cover the sport extensively when I worked in Jacksonville where the last time I covered the Daytona 500 was unfortunately the race where his father was killed. Since then, I can’t watch a full race—maybe check the final few laps–something I’m glad I did for the recent weather hacked race at Daytona.

No question when Junior wins, Nascar wins. If Matt Kenseth wins the race, its not on the cover of Sports Illustrated. Junior is to Nascar what Tiger is to the PGA—dollar signs and TV ratings. I have always enjoyed his demeanor interviewing him over the years where despite his last name seems humbled by all the attention he gets and seems to appreciate it, the older he gets. 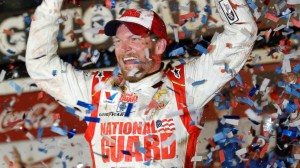 Junior also comes across as a normal guy—admits he’s not a great athlete where he recently said he wouldn’t be the star of your local pickup basketball game. He also joined Twitter where his first follow–how about Tom Hanks?? How many drivers would have done that?

One more note—I don’t like the fact somebody will be driving the 3 car. Richard Childress’s grandson Austin Dillon could have plenty of numbers at his disposal but it just doesn’t seem right having somebody having Earnhardt’s number. I get that Nascar doesn’t retire any numbers but this one should be—-and I think most of Nascar fans would agree with me.

LEGO MANIA : Ok, not a big Nascar fan and gotta come clean–I was never a big Legos fan growing up. My brother Steve could play with them for hours but I never caught the bug. These days–what is the deal with the Legos phenomena? Its everywhere (a movie??)  and apparently the attraction isn’t just for kids. I read a recent article that says the 56 year old toy has an acronym–AFOLs (Adult Fans of Legos). 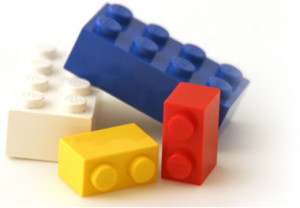 How about this my friends—the Lego Group estimates there are 250,000 AFOL’s—generally men in their 30’s and 40’s. A target audience who tend to lean towards the tech or graphic design fields.

Interesting Lego stats: There are 86 Lego bricks per person on the planet.

Set end to end, the Lego Bricks sold in 2012 would circle the globe more than 18 times and the company generated more than four billion in revenue last year.

Hey I still collect baseball and football cards every now and then—who am I to judge?

NOBODY ASKED ME BUT….On a recent flight, I read an issue of Rolling Stone where I found a clear example of the generational music gap. In one article you had an obit piece on the legendary Pete Seeger who for decades created folk songs and was a respected activist in social causes ranging from  Vietnam to the Civil Right Movement.

After I finish that, I flip a few pages and read a story on Drake—the very popular Canadian rapper and songwriter. His biggest concerns lately seem to be getting snubbed by the Grammy’s, Jay Z or some of his fans on Twitter.

Hey, call me a tweener–I’m not old enough to have closely followed the career of Seeger but will admit to having a Drake song on my Ipod. While its a case of two extremes—it does show the difference of the generations. Could we have less Bieber, Drake and Miley and more Seeger in our future…I would be for that.