Not when I was in high school or even college.

My mother would never admit to me there wasn’t a Santa Claus. 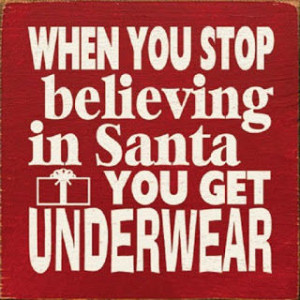 Nobody loved this holiday more than her and nobody was a bigger public defender of the Jolly Old Guy than my beautiful Mom who I’m sure has been singing his praises in heaven the past six years.

I remember asking my Dad when I was in elementary school, “How am I gonna know whether to give presents to my kids or not, if you don’t tell me if there’s a Santa?” 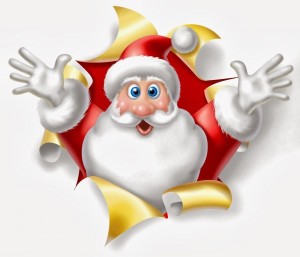 Fast forward a few decades later where Santa Believers are on life support in my household. My 13 year old made public her feelings years ago, but my 10 year old told us this year, “I’m still on the fence.”

I understand the method to my Mom’s Madness these days as the holidays are more fun, when more Santa Believers populate the house. The more well, the merrier…Christmas. 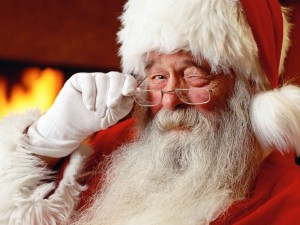 Notice how I didn’t say whether there’s a Santa Claus or not? I think my Mom would like that.

Santa Believers are our first stop in out last minute Christmas ride around the Naborhood, as usual thanks for stopping by.

STEVE HARVEY : Everybody makes mistakes, clearly Steve Harvey just picked a really bad time to make his. Harvey of course made the unprecedented move of incorrectly crowning a Beauty pageant winner. There’s a first for everything folks.

In a few words the game show host created a “Family Feud” between Columbia and the Philippines as the countries two leading ladies had to unceremoniously swap crowns causing the comedian now to be the butt of several punchlines. Can you imagine how Harvey may have reacted to someone else doing this? We’ll never know.

Hey give the man a break–he only has what 80 jobs? Seriously, the talk show(slash) game show(slash) radio show host and sometimes author I think can turn this in his favor by laughing at himself the way so many have the past week. Follow the path of Chris Webber not Steve Bartman.

Harvey’s timing was bad on several fronts, the biggest he made his gaffe during the social media era which made me think can you imagine any of the following:

during the Twitter/Facebook era? It would have blown up your phone or computer! Yes Harvey’s mistake will be remembered but it was hardly as bad as all of the above for very different reasons. Timing is everything especially these days when the critics pile on the tweets on top of all the criticism.

Funny though,Steve Harvey is the best thing to ever happen to this event–when is the last time it got so much press? The answer is easy.

HUMPTY TRUMPTY: Funny Donald Trump sold his rights to the Miss Universe pageant three months ago to WME/IMG who ironically represent Harvey and then made him the host?

I’m willing to bet Steve Harvey wants to be the host a lot more than Trump wants to be president. I for the life of me can’t believe “The Donald” is still your frontrunner. To me it says more about how bad Jeb Bush, Ted Cruz and Marco Rubio are than how crazy Trump is. 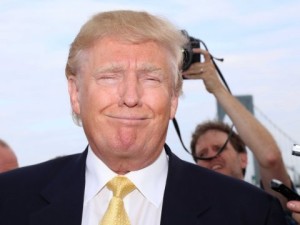 Here’s my take though, I don’t think Trump wants to win. Behind all the cockiness, all the one liners and insults, Trump I believe wakes up everyday thinking—“How on earth am I still leading this thing?”

As a result, Trump rolls out bigger and bolder insults daily at Muslims, Hillary and any one else in his sight. The bottom line, he has nothing to lose and deep down hopes he loses. I can only imagine the headlines we’ll see in the coming weeks –sadly many are buying in.

I thought Humpty Trumpty would take his great fall last summer when he was insulting Mexicans, but he’s still very much alive and kicking. He’s entertaining but the idea that he could be our president should scare us all.

CONCUSSION: I’ve been lucky enough to cover a lot of press junkets for sports movies and recently I had a chance to meet the star of the latest and most controversial, “Concussion,” movie.  Will Smith plays Dr Bennet Omalu.

Smith is arguably the most well rounded performer of all time in our country. From the Fresh Prince to the Men in Black to playing Ali and my personal favorite portraying struggling single father Chris Gardner in The Pursuit of Happiness—the man has range.

In Concussion, Smith shows he may have an Oscar in his future where at times you forget it’s him on screen as he plays the Nigerian born forensic pathologist perfectly down to his accent. 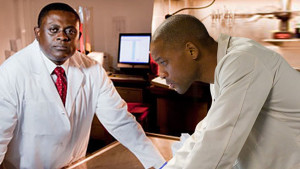 The movie is not the Christmas gift the NFL wanted under its tree. No Hollywood drama needed for this all too real story about how the league not only ignored, but covered up Omalu’s findings that CTE (chronic traumatic encephalopathy) was the direct result of many players  taking several hits over several years in the NFL.

Smith told me the NFL didn’t try to interfere with the film but he also admitted he was reluctant to take the role because his son played football and he grew up and still is such a fan of the game. Smith told me though, many current and former friends of his who played the game have given support to this movie and his part in it.

The tricky part of the movie Concussion is that there is so much still unknown. Sure CTE has been traced to some NFL players but hundreds of others have gone on to walk away from the game living normal lives. 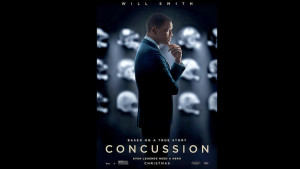 The NFL. in part because of Omalu’s work has settled with the player’s union on a multi million dollar lawsuit and in recent years have both changed the rules and the concussion protocol to make the game safer.

Still the fact that they tried to cover things up initially is exploited in this film. Omalu’s work was groundbreaking and will forever change how the game will be perceived, at all levels. Time will tell if the NFL will continue to do the same.

FOOTBALL TAKES: Like Will Smith, I still love the game of football and I love college football so much without its BCS Mess. Year two of the College Football playoffs promise to be fun as it seems you could make a case for Clemson, Alabama, Oklahoma and Michigan St to be the champion.

Michigan St seems to me to be that fluke team as they had no business winning against Michigan, but does that mean it was their destiny? I think Alabama beats Sparty. Clemson and Oklahoma should be a great game but I think after making it this far, the Tigers have shed its “Clemsoning” tag and will meet Bama for it all.

I predict though that Nick Saban will outcoach Alabama Alum Dabo Sweeney and give the SEC back its bragging rights.

*I’m glad Odell Beckham Jr apologized–he should have. I don’t care what Carolina defensive back Josh Norman did, that was classless play as it seems Mr Madison Avenue has gotten a bit big for his britches—hopefully a dose of humble pie will serve OBJ well.

*Why would South Carolina hire Will Muschamp? I think Muschamp is smart but he’s also stubborn offensively—crazy to think if someone couldn’t win with the Gators, they could win with the Gamecocks? 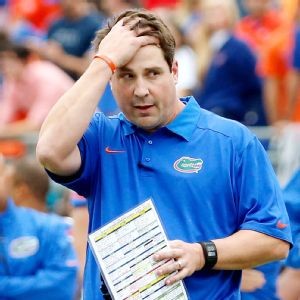 *Cam Newton should be your league MVP but enough of these celebrations? I’m all for being creative but he’s way over the top….

*Will Grier and Jim McElwain never seemed in sync. Even when Grier was playing and playing well in Florida it never seemed like his Head Coach was buying in and was always reluctant to complement his seemingly rising star?  Something odd was going on there behind the scenes and it will be interesting to see where the talented former Florida QB winds up? What a waste in couldn’t be in Gainesville.

GOOD READS: Here’s a few books I would recommend for your sports fan both young and old. 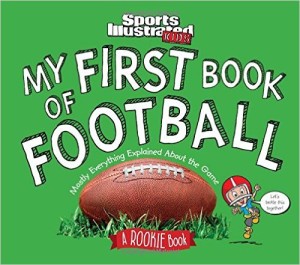 MY FIRST BOOK OF FOOTBALL: My friends at Sports Illustrated for Kids put together this  simple book for your little guy or gal which easily explains the game. Divided into four quarters, it breaks down in big pictures and in just a few words everything from the pregame coin toss to the winning touchdown as a countdown clock ticks away in the corner of every page.

It”s the perfect way to get your future football fan interested early.

And for your older fans: 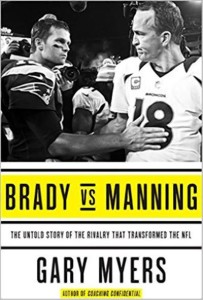 BRADY vs MANNING: This is an interesting read from veteran NFL writer Gary Myers who breaks down in great detail the relationship between Tom Brady vs Peyton Manning primarily away from the football field. Several insightful interviews with both future Hall of Famers families where we learned their Dads are great friends and the two quarterbacks also are very close getting together frequently in the offseason.

One of my favorite stories in the book was about Tom Brady’s Dad, Tom Sr who was hoping his son would go to Cal instead of Michigan out of high school but never wanted his son to know. When Brady picked Michigan, Tom Sr missed his son so much, he underwent counseling.

NOBODY ASKED ME, BUT: I love Christmas but it’s not my favorite holiday. I don’t want to go full blown Ebenezer Scrooge on you but think it’s much more stressful than my personal favorites Halloween and Thanksgiving . It often puts too much pressure on many people, especially those who can’t afford to give their loved ones the kind of attention they feel they deserve.

I regret not taking my kids to help the homeless or the less fortunate this year but will make that a goal in the future. I think its something we all would enjoy and would give the kind of meaning this holiday really should be all about.

Trust me, I love buying presents for my girls but it seems the holiday just gets a little too crazy.

We all are battling something this time of year, here’s hoping all of you take time to enjoy the Holiday with friends and family—that’s the part I enjoy the most.

EXTRA POINT: C’mon baseball, I know Pete Rose has lied repeatedly. Its ok if you want to ban him from baseball but let the man have a plaque in Cooperstown, it’s not complete without the All Time Hits King.