But frankly, I would love it to happen.

In this crazy state of college football this fall, with both the Gators and Seminoles in an absolute free fall,we need someone, anyone to shake things up the last month of this irregular season.

I have the man for the job. 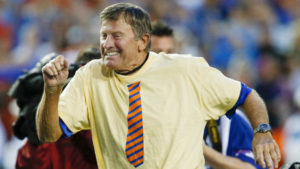 Those non risk takers out there may say it’s preposterous or downright ridiculous.

I beg to differ.

Let me show you how a small sample size of Spurrier could motivate BOTH Florida and Florida State and serve as the potential highlight for both of their sad seasons.

I’ll begin with the Gators—with four games left, the Head Ball Coach makes sense on so many levels.

He already has an office in the building where you know he would love to get his hands on some ball plays and kick it old school and rotate those quarterbacks just for ole times sake.

Once upon a time you had Noah Brindise and Doug Johnson–well let’s update the HBC’s resume to a little Feleipe Franks one play and a little Malik Zaire the next.

Can you imagine if Luke Del Rio was still in the fold? Oh the possibilities are endless.

A lame duck Steve Spurrier in front of the mic for four more games? I’m all in.

The magic would be temporarily back folks and the possibilities would be endless.  I just wish the Gators made this move before the Georgia game—sure the Dawgs would have likely still won big but the HBC would have deflected the losing and still been the life of the World’s Largest Cocktail Party.

We lost a Spurrier photo op for Georgia/Florida week but folks there is still time to make amends.

Do I need to remind you that South Carolina is still on the schedule?  Can you imagine how much fun it would be seeing Spurrier return to Columbia with absolutely nothing to lose against another former Gator turned Gamecock in Will Muschamp? 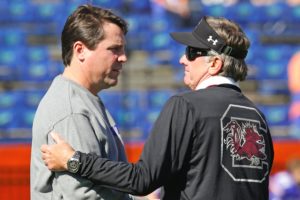 This matchup may force College Gameday to make a last minute and unexpected audible. Who cares that the teams are unranked—this would be great college football theater, not to mention the pregame press conferences…oh the possibilities.”

Spurrier “Don’t worry Willie, if this doesn’t work out with the Cocks, the Duke job will always be waiting for you”

A lame duck Spurrier would be extremely entertaining but also impactful in Gainesville.

He wouldn’t have to recruit but would remain a great recruiting tool for whomever jumps in the Gators Head Coaching Seat next. Spurrier remains actively in the mix with several of his former players and teammates–so the orange and blue foundation is strong–why not keep it that way in the coming weeks?

You mean to tell me having Randy Shannon carrying the “interim” tag gets you excited about anything in the month of November? Give me one hand in the room who would rather have him over the HBC for the stretch run?

I still don’t see any.

We’re not asking for four more years, just give me four more games…..

The Spurrier hire wouldn’t just benefit the Gators, he’s there to motivate the Seminoles too.

FSU likely will limp into the Swamp without a bowl berth for the first time since 1981 but how about this for motivation……they have a chance to beat Steve Spurrier for one last time?

Of course they could also lose to Spurrier for one last time, but I digress. 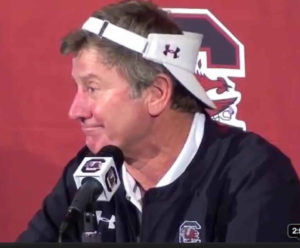 Can you imagine the hype leading up that game—maybe for one last time, Spurrier will give us a little “Free Shoes University,” or issue a “no late hits warning.” The best part is he will do something, none of us expect which is what always made covering Spurrier so much fun.

So with no bowl bids, no conference championships and very likely no winning records to boast about around Turkey Day—-I’m begging the Gators’ powers to be to call the ultimate Hail Mary to save this despicable Sunshine State College football season.

Bring back Spurrier, the first suggestion in our latest lap around the Naborhood…as usual thanks for stopping by.

ODE TO TOM PETTY: I attended my first Florida game in years a few weeks back where the highlight against those LSU Tigers certainly wasn’t the terrible fourth quarter against the Tigers, it was the Gator crowed collectively singing, “I won’t back down” entering the fourth quarter of the game.

This came just days after the passing of Gainesville’s own Tom Petty who along with Billy Joel are my favorite musicians of all time. You know what they both have in common? They played a huge part in my life from when I was in middle school to high school to college on to young adult life and now approaching my (ouch) fifties. That’s rare air. 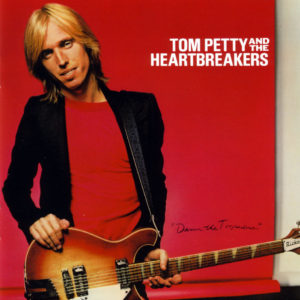 I first began appreciating Petty around the age of 12 when his Damn the Torpedoes album debuted. “Don’t do me like that,” and “ Here comes my Girl,” were early favorites. I was just getting into music then but his sound was different and his songs were consistently great. From then on I looked forward to every release and there were many. My biggest regret is I was supposed to see him in Tampa last spring with two old friends but opted out at the last minute—who would have thought that it would be the last opportunity.

Tom Petty produced endless great songs where we all have our favorites but here are my top five, all of which have been broken records on my Ipod:

(1) I WON’T BACK DOWN: This song is classic Petty. Always great motivation on those days when I don’t feel motivated or just need a little push on the treadmill. In all kinds of weather, Tom Petty brings this one all together.

(2) CABIN DOWN BELOW: “Wildflowers” was arguably my favorite Petty CD–and this was my favorite track. Petty could play it slow and then rev it up–this was one of his most underrated offerings.

(3) “RUNNIN DOWN A DREAM“: Another great one off of “Full Moon Fever,” where “Free Fallin” was a classic but for me is a bit overplayed—this song was always a favorite over the years, keeping me company on several long drives and road trips.

(4) “LEARNING TO FLY“: This one came out in the early nineties when I was just graduating from college where I was learning a lot about life–hit home with me on a number of levels and I still appreciate it to this day.

(5) “MAKIN SOME NOISE” : Another track from the “Into the Great Wide Open” album. This track I always thought would be make a great walkup song if you were a Major League player—listen to the beginning of it and maybe you’ll agree?! I doubt Petty ever intended for anyone to interpret it that way. 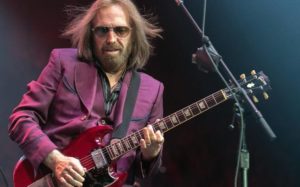 It’s hard to leave out so many but these are my Tom Petty go to songs. I loved him with the Traveling Wilburys and even liked his last release, “Hypnotic Eye” where he showed he hadn’t lost his fastball. Check out the song, “American Dream Plan B.” It’s fantastic. It seemed Tom Petty even in his sixties, had much more music left in him but we were lucky to have enjoyed him for as long as we did—quite a ride. RIP to one of the greatest of all time, I hope he knew how much he was appreciated.

NOBODY ASKED ME, BUT: Just when you thought the world of sports didn’t have a great underdog anymore, this year’s World Series stepped into the batter’s box.

Yes there is life after a Cubs Epic series as the Houston Astros have become the latest and greatest national underdog. I grew up in Florida when they’re were no professional sports teams but there was minor league baseball and Spring Training. My Dad routinely took me to Class A Cocoa Astros games where my favorite player was a slow yet steady catcher named Bruce Bochy. This was way before he became a future Hall of Fame winning Manager with the Giants. 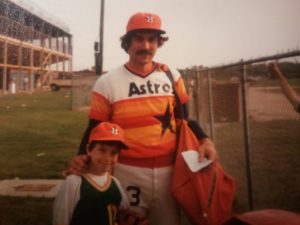 The Astros became my team and Bochy was my main man moving forward where the big league club would hold Spring Training every March and my Dad even arranged for me to be a bat boy for a few games. I’ll never forget how great it was watching those Stros win the 1980 one game playoff against the Dodgers only to lose a heartbreaking yet epic best of five series against the Phillies where my guy Bochy was run over by Pete Rose for one of the go-ahead runs. Heartbreaking….

That was the best series I’d ever followed until…well…. this year’s World Series which hopefully will bring baseball back into the national conscience again. Game Five between the Astros and the Dodgers was simply the “best” baseball game I’ve ever seen. The late night 13-12 victory had four lead changes, seven home runs and in the end, a dramatic game winning base hit by Astros third baseman Alex Bregman. It was the only way a classic like this could end.

For those who think baseball is boring, here’s hoping this Series brings the sport back where Game Five dominated Sunday Night Football in nightly ratings. 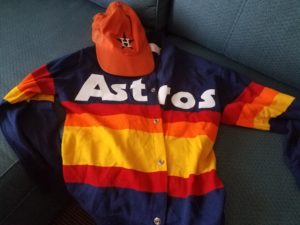 I may live in Tampa and also pull for the Rays now, but I’ll forever be a loyal Stros fan where it was fun digging up my old gear this week. In the name of Jose Cruz, Cesar Cedeno, Terry Puhl and Joe Sambito–this team will always be my favorite.

EXTRA POINT: Trick or Treat–does this sum up Halloween or the NFL Season. I’ve never seen the parity as high as this year—its’ why I could never bet on the pro game. Except for maybe the Patriots, I don’t trust any other team in the league this year.