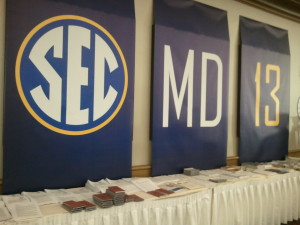 Its been a LONG six months but the wait is almost over folks. Yeah college football season is only a few preseason magazines away! The coverage has become year round but it can’t replace the real deal.

I write this from the epicenter of the sport–none other than Birmingham, Alabama. One of my favorite cities which may not have a pro team but they don’t need one. “The Ham” is the home of the SEC office and is the half way point between Alabama and Auburn—the best and most heated rivalry in college football.

The SEC is in 7th heaven—winners of the last 7 National Titles, 4 of which were won in this state. The best sign that the season is getting closer is SEC Media Days which includes every coach and now three of their selected players. I’ve covered this event since 1992 when the likes of Pat Dye and Johnny Majors were here—21 years later (man i’m old) Spurrier is still around but he’s hardly alone. The head ball coach one of many thoughts in this week’s SEC stroll down the Naborhood….

BEST INTERVIEWS: In this day and age of robotic coaches its tough to hear anything interesting or funny but SEC Media Days never disappoints. The coaches for the most part are looser as the season hasn’t started and many are fresh off their vacations. Its a good time to get to know these guys and talk more than football–so why don’t we rank SEC coaches on who’s the best interview.

(1) Steve Spurrier–not much suspense here. I have grown to appreciate the Head Ball Coach over the years. Didn’t care for his late hit whining against FSU back in the mid nineties but enjoy him these days as he hasn’t lost his fastball. He isn’t afraid to criticize coaches, players or vote for somebody other than Tim Tebow as the best QB in the SEC. I would love to see him on Twitter and asked him this week if he’d consider it and he quickly struck me down “I don’t see what you gain putting your business out on the street.” Instead, he prefers to give it to us each and every press conference—wish they were all like him behind the mic.

(2) Les Miles—the unpredictability factor is off the charts. The Mad Hatter may answer a cell phone, belt out a show tune or ….well you never know. This year when asked about his troubled running back Jeremy Hill ?? Miles asked the whole media room I was in “Honestly how many of you while in college, had a misdemeanor charge?”  Never a dull moment, the Hat always keeps us guessing but is always entertaining. His diction has room for improvement, his players say he makes up words but we love Les for being Les—don’t ever change!

(3) Bret Bielema—His performance at Media Days almost moved him past Miles but we have to let the Arkansas rookie earn his stripes. The brand new Hog is both funny,and forthright. He wasn’t scared to go toe to toe with new Auburn coach Gus Malzahn on the safety of the no huddle offenses but in the same breath could make fun of himself and others on his team.  Bielema had some good zingers on Razorback Red Bull, the athleticism of current Kentucky coach and former Iowa teammate Mark Stoops–“he was short, red and angry.” Bielema is a young coach and a big Twitter guy, pointing out that the NCAA hasn’t caught on that a Direct Message is the same as a text??  This Head Hog talked the talk this week—we’ll see if he can follow it up in Fayetteville in the coming years.

*Dan Mullen—full of energy, not to many one liners but always brings something different to the table

ANTISOCIAL SABAN: Got a kick out of Nick Saban when I asked him how much social media is a part of his life? He admitted he doesn’t know how to text and that he had a social media expert come in and encouraged him to deliver his players their gameplans on facebook, given their short attention spans–“I looked at the guy and said (if that’s the case) I gotta get out of coaching.” As for his whole attitude on social media, “I spend the better part of my life, trying to not let people know what I’m doin.  I don’t quite get trying to tell everybody what I’m doin.”

THE M & M BOYS: In recent years, the SEC was lacking depth when it came to quarterbacks. It was a top heavy position in this conference for awhile with the likes of Tim Tebow and Cam Newton but this year many schools boast big time QB’s and they all begin with the letter M.From Manziel to Murray to McCarron and yeah even Mettenberger, the SEC’s M& M boys could give this year’s SEC slate a different feel.

Manziel is the reigning Heisman Hero and actually eclipsed the previous Media Day hype of Tebow this year. I’m not concerned about the off the field issues resulting from the Manning Academy, twitter or his several high profile relationships. Many in the media are hypocritical. When I was 20, I would have the occasional beer and if I was 20 and had one the Heisman trophy, I would definitely have been doing many of the same things. Johnny Football admits he must use better judgement in the future and that’s enough for me—I expect him to learn from the media blitz and attack opposing blitzes for another big fall of football.

As for the others—really impressed with AJ McCarron. He comes across very humble and appreciative of where he is. Many consider him a system QB as he is surrounded by loads of talent in Bama but this kid has proven he can make all the throws,is clutch but most importantly he’s a winner. AJ could walk away with more rings than he has fingers.

I would actually take AJ over another M–Aaron Murray. He’s seemed to be at Georgia for 50 years and told me it wasn’t a hard decision to come back as he essentially made it when the Dawgs lost to Bama on the last play of the game at the SEC Championship. Murray is a leader, a hard worker but says he’s gonna work on his accuracy. He will have plenty of help as all of his offensive lineman return along with the best running back combo of Todd Gurley and Keith Marshall—Gurshall if you will….

The last M resides in Baton Rouge and has the most question marks. LSU’s Zach Mettenberger was supposed to be the QB the program had waited years for but instead proved to be quite inconsistent a year ago. I think he’ll benefit greatly from new Offensive Coordinator Cam Cameron and with a year under his belt will be exciting to watch. Looking forward to Mettenberger meeting Georgia, his first and former school this fall.

There is no M in Jeff Driskel but I also like the Gators Quarterback to make some strides. Just don’t know about his receivers. He tells me he will be smarter when it comes to running the ball and is looking forward to hitting more deep balls—no question the gators could use that.

COACH BOOM: Speaking of the Gators, no doubt Will Muschamp aka “Coach Boom” hasn’t lost his bite but he seems more comfortable in his own skin entering this season. His sideline demeanor and post game aura didn’t seem SEC ready his first season but he settled down a bit more in year two and now seems like he’s much more relaxed.

Relaxed is a relative term as there is no doubt Muschamp is a high octane personality. He’s proven to be a defensive guru, a fine recruiter but up until the beginning of last season, many Gators had their concerns. Last year Coach Boom proved he could play comeback, win a big game in the Swamp (see LSU & South Carolina) and on the road (see Tallahassee). Now he has his eye on finally beating Georgia and making his 1st appearance in the SEC Championship game.

Last year nobody saw an 11 win season in Gainesville and its gonna be tough to convince anybody that there will be one this fall. The team lost its core players on a defense that carried them a year ago. All world kicker Caleb Sturgis gone and while Matt Jones and Kelvin Taylor will be great runners, not a lot of playmakers on offense. Its hard not to buy in to what Muschamp is doing with the Gators—he seems to be catching his stride as a Head Man, but I still say the Gators lose to Georgia and South Carolina and finish third in the East.

BEBES: I’ve dominated this blog with talk of coaches so I can’t leave out a man I saw in Birmingham who is my favorite College Football Coach of All Time. He’s former Alabama Head Coach Gene Stallings whom I covered back in the 92,93 and 94 seasons in Tuscaloosa.

The man his former boss Bear Bryant called Bebes could be tough on you but in the end he was always fair and often very fun to work with. There is no coach in the SEC like him today as with Stallings you always knew where you stood and he presented everything in an old school manner with his deep southern drawl that made many of us feel like we were covering the Bear himself. Oh yeah he wasn’t a bad football coach either brining Bama back with the 92 National Title led by arguably the best defense in SEC history. (still amazes me not one member of that D, went on to NFL success though??)

Stallings was a great coach and a tremendous family man. His son Johnny who has since passed, was diagnosed with Down Syndrome. He loved the players but his favorite part of the football program were the unsung heroes like the trainers and equipment guys. Today the Alabama equipment room is named after John Mark Stallings. Each Christmas we would gather in Stallings office and share a lunch with him where he would in turn share a lot of family stories. I’ll never forget one of those lunches where he had to get up and take a call from his wife who wanted him to pick up a Barbie for one of their granddaughters on the way home. Stallings was the real deal off the field and there will never be anything like him on it—it was great to see him just for a minute at SEC Media Days.

NOBODY ASKED ME BUT: Birmingham is known for football but honestly everytime I’m there I have a bigger priority:BBQ. This public service announcement is for all of you who are stuck deciding which BBQ joint to go to next time you’re in”the Ham.” Everybody says “Dreamland,” is the best. I admit its good but its third on my go to list. Full Moon BBQ sets the gold standard in these parts and compliments things with the best Sweet Tea in the free world. Second how about Jim and Nicks which has a great menu of both BBQ and ribs but the best part of the meal are the cheese biscuits!! The B in Birmingham may very well stand for BBQ—its the best I’ve ever had.

EXTRA POINT: How about this stat— In the past 21 years at SEC Media Days, the assembled media have correctly predicted the SEC Champion only—4 times!!!! Let’s see if a record number this year (1239) will get it right—they backed Bama….