Usually this time of year when the SEC has a roll call, we know what’s coming. Well not this time around?

On the eve of another big season—the talent pool is there, the depth chart is more than impressive but the star power is enjoying a bye week. 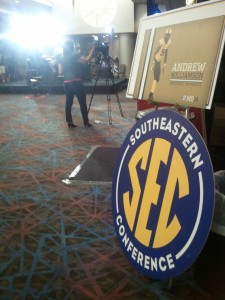 and searching all the media guides there is simply no Clowney in sight this fall.

Yeah, when  it comes to name recognition at this year’s SEC Media days, for the most part……crickets………….

I’ve have covered this event since 1992 when they kicked off something called an SEC Championship Game and this was the gift to the media promoting the inaugural event, one of my favorite keepsakes… 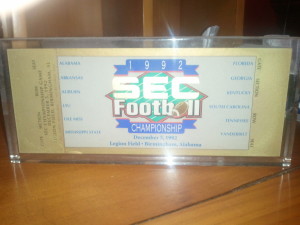 Since then there was always a big name who dominated this event. From Wuerffel to Manning to Couch to the other Manning and then you had the likes of Shaun Alexander, Darren McFadden, Cam Newton and Mark Ingram—the SEC Stars always seemed to align…except this year?

For the first time I can ever remember there is no marquee QB or dominating defensive player to take center stage. Sure you have Georgia’s Todd Gurley and Alabama’s skill guys in TJ Yeldon and Amari Cooper but they don’t seem to have the same feel or appeal . Then again who heard of Manziel before his freshman year or saw Newton’s year coming at Auburn? That’s what makes all of this so much fun.

The biggest sign of the lack of star power is that the biggest star of this year’s SEC Media Days was a former player and an infamous one at that.  How about former South Carolina QB Stephen Garcia who vastly underachieved as a Gamecock but received the most attention as a member of the media this year where he was touting a new website: Saturdaydownsouth.com.  His former coach Steve Spurrier aired out some sarcasm by asking if his former QB was in the media or a member of Duck Dynasty?? 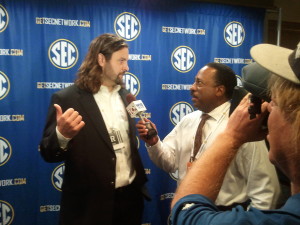 Will lack of big names translate to lack of big time production in what seems like the biggest transition year this league has had in some time? I doubt it.

We’ll soon find out—the anticipation of saying goodbye to the dog days and hello to college football is nearing where new stars will shine in a conference that never disappoints.

Searching for stars, our first snap in this edition of the Naborhood which hit the road in Birmingham this week for SEC Media Days—the gift that continues to keep on giving. As usual, thanks for stopping by.

MEDIA MISSES: I gotta say Alabama may be in trouble folks—they are the media’s pick to win the SEC this year and lately that’s hardly a good omen.

Why? Amazingly when it comes to preseason picks, the media has been about as accurate as the National Enquirer (are they still in business?) 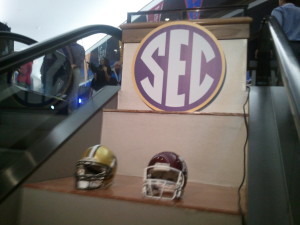 Since 1992,the media has only picked the SEC winner in the preseason, wait for it—- 4 times??!!  Yes that is 4 times in 22 years. 16 of those preseason projected winners DIDN’T make it to the SEC Championship game—that is incredibly….bad.

Insert your media bashing punchlines  in 3…2…1…

Here is the breakdown over the years where of the 4 successful picks—three of them have been the Gators in 1994,95 and 2008 while LSU backed up the media’s promise in 2007.

Check out this ugly history—I’m guessing my nine year old could have done better if I would have told her to pick names out of a hat:

This year Nick Saban had fun in his parting shot to the media pointing out its horrendous preseason track record saying “We’re evaluating you” He said it with a stone face but you know he loved every minute of it…..

SPURRIER VS SABAN: When it comes to the Head Ball Coach, I have certainly flip flopped over the years. Back in the nineties I didn’t like how he whined about FSU’s late hits and was out of control and sometimes classless on the sidelines. Fast forward to 2014 and I have grown to appreciate one of the few coaches who isn’t afraid to speak his mind—which is becoming an endangered species.

Watching Spurrier at South Carolina over the years, you get the feeling he is playing with house money. Despite a rocky Redskins pitstop, his revolutionary run at Florida and his renaissance with the Gamecocks have surely padded his SEC stats along with his incredible legacy. Oh yeah, don’t forget about that ACC title at Duke… 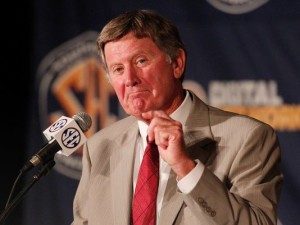 He also is the only SEC Coach who can truly pick on Saban. I do think Saban is a better coach but Spurrier has more SEC titles and surely more swagger. The HBC likes to poke the Bear (no not that one) as he implied Saban this spring  hasn’t maxed out all of his great recruiting classes—a laughable statement but its what makes Spurrier fun to cover—the guy doesn’t care.

Spurrier is also popular with his former players. Players like former QB and current ESPN analyst Jesse Palmer who was benched repeatedly by the HBC but like many of his peers seem to forget the “in your face” stuff and are always armed with a great Spurrier story. He told me this week how fun it is to see him in these kind of forums. 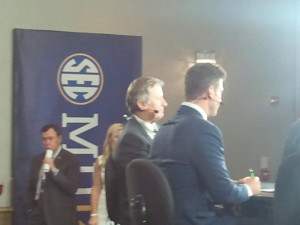 My favorite was Fred Taylor’s who told me a few years ago that after a bad practice his freshman year, the HBC took him aside and said ” Its not your fault, we are the ones who recruited you.”

Les Miles is funny yet goofy, Bret Bielema is an up and comer with us media geeks but nobody brings the total package like Steve Spurrier. There will never be another coach like him and  in this day and age of social media which scares off many coaches like Will Muschamp who is programmed and predictable—-I’m thankful that Spurrier is always there to shake things up even when he’s wrong—he’s entertaining.

EMMITT RETURNS: The SEC’s legends have one criteria,they go by one name. You have Archie, Herschel, Bo and of course Emmitt. Smith was on hand this week promoting the SEC Network in Birmingham and the guy still looks like he could  convert a 3rd down.

Before Tebow and Urban, before the Fun and Gun, Emmitt Smith was all Florida had. Its amazing to me how good he was when the Gators were so bad. I remember having a class with him during my years in Gaineville–Travel and Tourism—yes it was full of football players and yes I needed an easy elective. I remember the teacher giving us occasional pop quizzes where one day Emmitt was the answer to one of them—he was the Big Man on Campus. 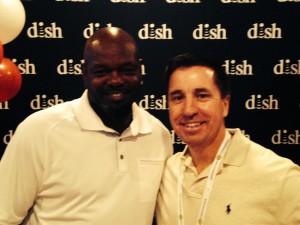 I remember walking behind him and having students pull up next to him and roll down the window and say “We’re not Worthy!”—it was crazy stuff. They had a rap song on the radio called “Do the Emmitt”—the guy was everywhere. Needless to say the NFL’s all time leading rusher and future dominator of Dancing with the Stars went on to do pretty well.

It was great catching up with him where I was with many of my media peers who were in Gainesville at the same time. Funny, we were all in Alabama where it all started for Emmitt back in 1987 against the Tide. In his first start for the Gators in Tuscaloosa, he rushed for 227 yards and two touchdowns—he would never look back.

Hard to believe that was 27 years ago?! Emmitt is now married with five kids and tells me his schedule is tied up from now until the end of football season with corporate events–he is still running wild.

By the way, he tells me he remembers that Travel and Tourism class.

MULLEN & RICHT: One SEC coach I always find myself rooting for is Mississippi St’s Dan Mullen. I liked him at Florida where he always brought good energy with his players and the media. I have always thought though he should have followed the coaching path of Mark Richt. 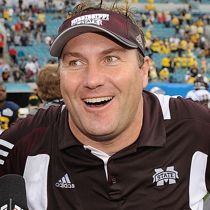 When I was in Tallahassee, Richt had lots of offers as FSU’s Offensive Coordinator where he could have taken jobs like Pittsburgh but waited on a great one in Georgia. Mullen seemed to have jumped the gun in taking Miss State when he surely would have had better offers down the road. I hope it works out for him with the Bulldogs but being in the SEC West its gonna be tough if not impossible. I’m not sure how he ever breaks through the likes of Bama, Auburn and LSU…..would have been interesting if he would have waited on a Penn State or Michigan job?

MANZIEL OVERLOAD: As accomodating as Mullen was, the same couldn’t be said for A&M’s Kevin Sumlin. Usually the cool cat on the sideline and behind the mic, I was surprised how defensive he was to the countless Johnny Football questions—you would think he has plenty of practice. I can understand him wanting to move on and having been through this media circus for two years now but Sumlin to me came off bitter and for a coach known for his cool, I thought he handled it poorly. 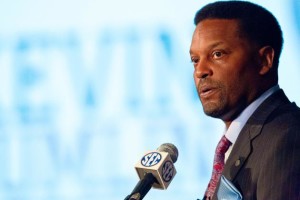 When he could have just shook off the questions, he stared down the media and gave the look of “why would you ask me that one?” as I followed him in several different rooms. Hey say what you want about Johnny Football coach but Manziel made Sumlin lots of money and put his program in a great position for years to come, not to mention all the money he brought in to upgrade the facilities. I’m not asking you to be all smiles but was surprised with all the surliness.

NOBODY ASKED ME BUT: I love Birmingham. I love the people, many of the local media are good friends of mine and yes I love the food.

Everybody loves Dreamland BBQ and for good reason but for me there are far better places. Jim N Nicks is my favorite followed closely by Full Moon BBQ—you really can’t go wrong though. I have never been a big fan of Sweet Tea but the city of Birmingham will change your mind in a hurry. 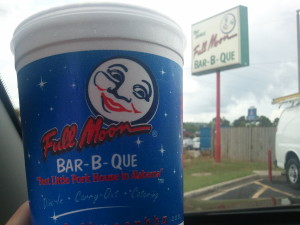 Full Moon’s Sweet Tea is as good as any dessert. It makes you put in more time on the treadmill but its certainly worth it—I highly recommend it the next time you’re in the Magic city.

EXTRA POINT:  I was one of the record 293 voters at SEC Media Days compared to the previous high of 243 last year. Despite its monster schedules, I went with Auburn and how bout Florida to meet in this year’s SEC Championship. I have Auburn winning but am banking on a bounce back year from Florida QB Jeff Driskel who is healthy and seemingly in a more comfortable spread offense which should  FINALLY play to all if his strengths.  Along with a strong gator defense and what should be a gigantic chip on their shoulder pads, I expect Florida to  bounce back.  With that said, I think Gus Malzahn is the best gameday coach in the league—let’s kick this off!