Do you have a word which drives you crazy?

Think about it, many said he’d “never” win a major again….. 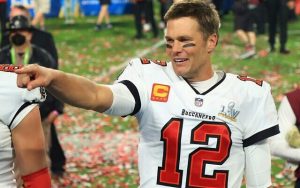 We should have learned to never say never but the examples are…..never-ending.

Which brings us to the king of “Neverland”, the sporting world’s version of Peter Pan, the one and only Timothy Tebow.

They said he never would make it as a quarterback (check)

Then he would never be a great baseball player (check)

The latest….after being away for eight years, Tebow should never make an NFL comeback?

Frankly all of the nevers have made me like Tebow even more.

Think about it—Tebow could have easily rode off into the sunset after the Patriots cut him eight years ago and done whatever he wanted—-lots of broadcast work and loads of offers to be a motivational speaker were there for the taking—but instead he continues to chase his dreams.

I applaud the Peter Pan approach as Tebow refuses to grow up or give in and that’s fine with me. We should all chase our dreams as long as we can and not let those “nevers” effect us.

Are the odds against Tebow? Absolutely, but that’s what makes following his career so inspiring. He didn’t have to grind his way for years through the minors, but he kept swinging away even with all the critics chirping on the sidelines.

Sure he could have tried to play another position in the NFL years ago but he wanted to play quarterback, I always appreciated his stubborn nature to hang in there despite being cut at several spots.

For years I’ve covered Taysom Hill with the New Orleans Saints, whom I consider to be a more athletic Tebow. He’s faster, has a better arm and is more versatile where the Saints quarterback has played special teams, receiver and running back, it will be interesting to see if Tebow’s old college coach and now Jaguars head man Urban Meyer uses him in a similar fashion….. 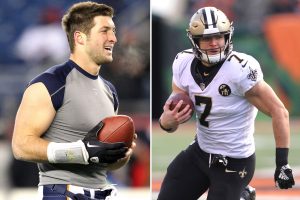 I haven’t read one article saying Tebow will succeed. For example, you have Sports Illustrated’s NFL Insider Albert Breer who wrote, “I can’t find anyone who thinks it’ll work.”

Exhibit B, you have Lindsay Jones from the Athletic who covered Tebow’s glory Gainesville days and in Denver where he put on that magical and improbable 2011 playoff push quarterbacking the Denver Broncos to the postseason. She wrote “He’s just lucky he’s found the one person in Meyer whose own ego might be even bigger and set on making this work.”

Well……you have to have an ego or a belief in yourself to put yourself out there like Tebow has—and that should be applauded and frankly admired. Tebow is polarizing for many reasons, his openness with his spiritual beliefs, the fanatical following he brings wherever he goes and his unrelenting mindset to tackle his many “against all odds” athletic obstacles, but there is no second guessing how hard he works or how much he believes in his abilities.

I rooted for him to make it as a quarterback.

I pulled for him to reach the majors.

That was strike one and two —-and now I’m hoping Tim Tebow doesn’t strike out in seemingly his final professional at bat.

When he made the inspiring playoff push in Denver, I liked to say you can’t spell Tebow without ending with a “W”—now it seems in Jacksonville you can’t spell his name without beginning with the two letters of his new position, TE (Tight End.)

Tebow is a lot of things but he’s “never” boring, which reminds me of one of my favorite movie quotes of all time from the eighties classic “Say Anything”.

At the end of the movie the protagonists Diane Court and Lloyd Dobler are on a plane forming a life many say will “never” work.

Court looks at Dobler and says, “Nobody really thinks it will work do they?” Dobler replies, “No, you just described every great success story.”

Here’s to some final football success Tim Tebow, even though your critics are “saying anything” and almost everything negative about your efforts—I’m pulling for you.

Tebow’s Neverland the first stop in another drive around the Naborhood, as always thanks for stopping by.

MORE THAN MONEY: I just finished one of the most complete books I’ve ever read, it really includes something for everyone.  It’s William Green’s recent release, “Richer, Wiser, Happier.” How the world’s greatest investors win in markets and life.

This is no get rich quick offering, it’s so much more. It really shows you that those who make their money in the stock market obtain their wealth in a variety of  different ways and through a multitude of various lifestyles.

Green spent over twenty five years interviewing an assortment of financial gurus from Warren Buffett to Charlie Munger to Sir John Templeton, investors of all ages and all sorts of routines. That’s what hooked me, sure the sage financial advice was great but it was interesting to see the ways these investors approach life and how it has led to their success.

While these entrepreneurs are different, they were all very much alike. Sure they enjoyed making millions and often billions of dollars but many aren’t counting their pennies till they retire—they either want to do this forever or have taken on other challenges—they’re passion keeps them alive and has made them successful. You had one investor who slept in every day, many who drive modest cars and several who live very simple lifestyles despite their burgeoning portfolios.

Some great takeaways from this book were these money experts approaches to life as the chapters delved into different approaches such as the advantages of being lonely, not making dumb mistakes, keeping it simple, being resilient and the art of cloning. Yes many gained fortune by just taking other’s template and making it their own–a common practice according to Munger who explaining Walmart’s success, ” Sam Walton invented practically nothing. But he copied everything anybody else ever did that was smart–and he did it with fanaticism.”

You had  longtime investor Matthew McLennan who said “What I learned over time is that often it was just the people who didn’t give up, who just kept learning, kept evolving, stuck to it and where willing to live through adversity.” This applies to anybody……and any career.

The major theme the author found in analyzing these success stories is they acquired financial freedom which gave them the ultimate freedom, ” For many of the most successful investors I interviewed,” Green said. “That freedom to construct a life that aligns authentically with their passions and peculiarities may be the single greatest luxury that money can buy.”

CHARLES GRODIN: One of the many things I miss about my Dad is watching our favorite shows whether it was in person or later via YouTube. We used to love to watch Letterman together where we rarely missed the frequent appearances from one of his best guests, Charles Grodin, who passed away this month at the age of 86.

Grodin was known by many for his movies which ranged from Beethoven, the Heartbreak Kid and my personal favorite Midnight Run ,but a big part of his legacy was his schtick on late night whether it was teeing up Johnny Carson or Letterman. He would come on the shows with his vintage dead pan humor always picking a fight and being irritable. It was great TV and made Grodin a frequent guest.

I bet I watched Midnight Run at least ten times with my Dad, where Grodin and Robert De Niro were a great team and had some classic scenes. While it was Grodin’s greatest movie, nothing was better than Grodin stirring it up on late night, I hadn’t seen him do it in years but will never forget it—he’ll be missed.

NOBODY ASKED ME, BUT…...ESPN has had its share of characters over the years, the kind of creative personalities which changed how we watched sports, but no one was like Kenny Mayne, who was the latest salary cut for a network which has lost a lot of talent over the past twenty years.

In a tweet Mayne said he was “a cap casualty” which is correct as ESPN could no longer afford his services. It’s safe to say Mayne who replaced Keith Olbermann after he left the “Big Show” with Dan Patrick had a style like no other. His dry wit was appreciated my many as he would deliver dead pan lines like, “Welcome to SportsCenter, we are grown men wearing make up.” I also loved how he would end shows by saying “Thanks for having electricity”.

Mayne was a vital cog in ESPN’s great commercials and his Mayne event segment was extremely dry but often tremendously funny. He had great home run calls like “he hit the ball real hard.” or “I’m not sure what that pitch is, but it tastes like chicken.” Not everyone liked Mayne but I did and many athletes appreciated him such as the elusive Aaron Rodgers who liked Mayne so much he gave him an exclusive interview in Mayne’s last SportsCenter which was a tribute to the longtime goofball.

Mayne’s story was unique, a former UNLV quarterback where he backed up Randall Cunningham. In vintage Mayne fashion he applied for a job at ESPN as an unemployed sportscaster in 1994 by sending the powers to be a letter inquiring whether the network would hire him? The note simply asked to check a box, including one option that read, “We’ll hire you when there’s an ESPN5. It worked!

He would leave quite an impact with many including a Dad who tweeted to Mayne the affect he had on he and his son  “Before passing, when my 14 year old son was in the ICU with a brain tumor, we would hold hands and watch you on SportsCenter. Tho he was very sick and sometimes intebated, we would laugh together at your commentary. I cannot replace this gift you gave me or thank you enough.”

EXTRA POINT: Good to see many of the 2020 graduates get do-overs in terms of their ceremonies yet will forever feel for my 2020 high school graduate Morgan Grace Nabors but she will have a great story for her kids one day….