Hope everyone is enjoying the holidays!

As I’ve mentioned in many previous blogs, I love giving gifts but have always preferred the simplicity of Halloween and Thanksgiving over the craziness of Christmas.

With that said, usually, we all have a favorite gift, right?

This year, mine was dialed in weeks before Santa hit our house.

This gift was absolutely free, didn’t cost a thing unless you put a premium on time…. which I do.

It was a gift that changed me, made me want to be better moving forward. It was a reminder of the small things we as a society used to do on a more regular basis before cell phones and social media pulled us out of our routine.

Back in early December, I was sitting in a hotel room when an old friend called me out of the blue. I answered and we talked and talked where it got to a point where I started wondering why he called……?

After more than a few minutes of catching up, I said, so what’s going on?

My buddy just said, “I was just checking in to see how you were doing.”  He knew nothing was wrong in my life, just a good friend checking in—I really appreciated that and thought I need to do more of that to others. In this day and age of constant texting where nobody leaves voicemails anymore, how good would it feel to have somebody just call you and ask how you were?

I have always enjoyed texting people special messages on their birthdays or just random check-ins but the phone call meant more to me….it was simple yet sincere.

We are all busy during the holidays with work and family, where endless errands take over our lives, but it was that simple gesture that stood out for me. Afterward and in the next few weeks, I followed my friend’s lead and initiated several conversations with friends and relatives and now it will become my new ritual—the lost art of a simple conversation to let someone know you were just checking in?

It’s truly the perfect gift ….that keeps on giving.

My greatest gift….the first stop in another few laps around the Naborhood–as always thanks for stopping by!

JOHN MADDEN: Life is precious and unexpected. I was planning on writing how much I enjoyed watching Fox’s great documentary on the legendary John Madden not knowing he would pass away only a few days later? It came as a surprise to everyone including his family….what an incredible loss.

There was no one like him nor will there ever be, this is certain. How many people have three tiers to their life which were legendary? Having one is extraordinary…. but to have three? Unprecedented.

Madden was first and foremost a football coach who after ten seasons with the Raiders and only at the age of 42 retired because he just didn’t have anything left to give. What is amazing, according to the documentary, Madden didn’t really have a game plan for the rest of his life, he just knew his heart wouldn’t let him coach anymore. If he only knew what was coming….

I remember Madden as the Raiders Head Coach winning a Super Bowl and perennially leading Oakland to the playoffs but my first true impactful memory of this legend was his beer commercials. As a kid approaching my teenage years, I  had never seen someone with such a rare yet natural outgoing personality in this forum. Watching Madden breaking through walls and banners and showing that much energy in his many ads, it was real and it was refreshing.

The world of sports television was rather mundane before Madden reluctantly at the time stepped foot into it but he changed it forever. He was the first to give it pizzazz and spunk—nobody had ever been that emotional. His use of a telestrator went way beyond X’s and O’s—he would break down turkeys on Thanksgiving, offensive lineman’s guts, Troy Aikman’s beard, and Gatorade buckets—there was no one like him.

Madden was also a man of his word. When he said he wouldn’t coach again…he didn’t. After an anxiety-filled flight, he said he would never fly again….and he didn’t. The fact he did his job busing around the country for years, was just another layer of his legend.

And there never will be one like him again.

I don’t blame today’s generation for thinking Madden was just the namesake for video games (I wonder if he ever played a video game?) He was at his heart a coach but his legacy will be his rare influence on so many people from his players to the countless people who were impacted by his love for the game of football. We all were benefactors of how he both taught and entertained us for decades.

RIP John Madden, you were the ultimate pioneer.

GREAT READ: While Madden’s legend will never be forgotten neither will the Beatles. It just seems their influence continues to take shape in this generation as this year we’ve seen a Disney documentary, “Get Back” along with Paul McCartney’s recent book, “The Lyrics,” in which Sir Paul breaks down 154 songs with first-person commentaries on his life and music. Special content for sure. While I haven’t seen the doc or read McCartney’s book, I thought James Patterson’s recent offering, “The Last Days of John Lennon,” was both tragic and fascinating at the same time. Patterson shows his incredible range in this book by going back and forth between the intriguing origins of how the Beatles came to be only to combine this narrative with the twisted mindset of the man who ultimately assassinated Lennon, Mark David Chapman.

It was interesting how the Beatles came to be, as I didn’t realize the early dynamics of how Lennon was the older alpha influence, befriending McCartney and reluctantly bringing in a younger George Harrison. How they ultimately incorporated Ringo in the mix.

Patterson does a great job of combining the toxic life of Chapman with the evolution of the Beatles journey—a fascinating read.

BAD NEWS BUCS: If you’ve read this blog you know I have always been a defender of Tom Brady and don’t understand his many critics who basically say they don’t like him for the simple fact he just wins too much.

Well since Tompa Tommy has been in my city I more and more see my biggest criticism of him on full display–he’s a really bad loser. It’s disappointing……

I get he’s competitive but someone of his stature has to be more self-aware. The greatest quarterback of all time can’t be cussing out opposing coaches, throwing tablets on the sideline. In addition and this has become a pattern–when he loses he often doesn’t shake the opponent’s hands after games and routinely is short with the media.

Tom, you’re better than this? Or maybe you’re not?

Brady’s behavior pales in comparison to the idiocy of his wide receiver Antonio Brown. Frankly seeing Brown outside the lines shows he is the true definition of why people often perceive athletes as spoiled and entitled. I’ve often thought most athletes are great to deal with but there are exceptions to the rule like AB. 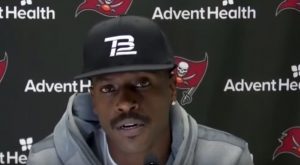 The Bucs brass of head coach Bruce Arians and general manager Jason Licht made it clear it was a one-strike deal when they were resoundly criticized for acquiring  Brown who entered Tampa Bay with a truckload of baggage. When he was recently suspended for submitting a fraudulent vaccination card, I figured it was a no-brainer–he would be gone but the Bucs went back on their word.

It’s clear they could care less about doing the right thing and more about winning where it’s also evident Tom Brady rules the show inside the walls of One Buc Place because he is Brown’s biggest defender.

My final word on self-righteous AB—don’t tell the media they are creating the drama—you are the drama king. I don’t want to hear you “can’t control” the people who try to bring him down. How pathetic, you are fully in control of your actions! This guy lives in a different universe where he’s never really had to  grownup and take accountability. The fact he hasn’t been kicked out of Tampa by the Buccos is a smear to what’s been a great run for the pewter pirates and that’s a shame…..

NOBODY ASKED ME…..BUT : Ok college football, you may possess some diehards who care about these meaningless bowl games but I’m not one of them. First off as a Florida alum, I don’t think a 6-6 Gators team deserved to play in one (is having a winning record too much to ask?) On that note, why are UCF fans acting like they won a national title beating a Florida team which lost its coach and is just an awful mix of underachievers with a roster who was missing a handful of key players on both sides of the ball? Relax Knights…. 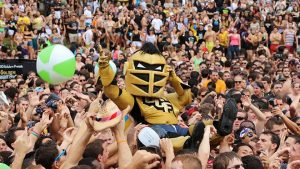 I haven’t watched the Tailgreeter Cure Bowl, the Bahamas Bowl, the RoofClaim.com Boca Raton Bowl or even the Jimmy Kimmel LA Bowl (no I’m not making this stuff up??)

It’s time college football gives us a 12 team playoff which would make many of these bowl games more meaningful and get rid of awful games like Florida vs UCF. And UCF nation if you win the 12 team playoff then feel free to place a “real” national championship banner in your stadium—at that point you will have earned it!

EXTRA POINT: Speaking of the gift that keeps on giving–how about Bruno Mars‘ latest release—“An Evening with Silk Sonic.” There isn’t a bad song on this one which is rare to find!