I took the hint early on.

My dream of being a professional athlete was never going to happen but plan B sounded pretty darn good.

You mean they actually pay you to cover sports?

I never wanted to be anything other than a sportscaster–started dreaming about it around the fourth grade. Along the way many helped me wanna do it even more.

Many of those are now going away–remarkably all at once.

In the span of a month, the sportscasting world lost quite a triumvirate: 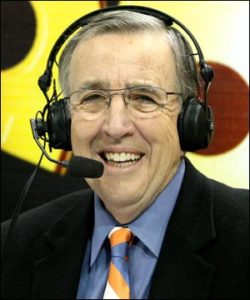 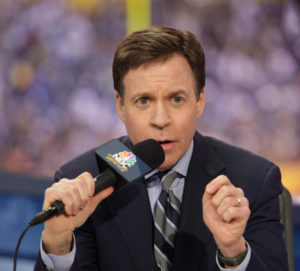 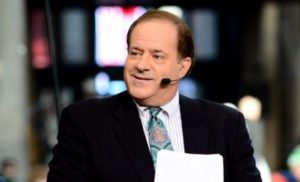 The Killer B’s—Brent Musberger Bob Costas  and Chris Berman. All very different but all legendary figures in my profession, bringing something different to the sportscasting platter–especially to young guys growing up wanting to be just like them.

Musberger and Costas could do it all but did it in different ways. Brent delivered a more casual and conversational approach while Bob was more intellectual, arguably the smartest sportscaster of all time.

While many dislike Berman for his stale catchphrases and overexposure– he’s actually my favorite of the three. I grew up loving how he delivered his highlights, laughing at all his creative nicknames and most of all appreciating his unusual style– something many of us hadn’t seen before.

Some say bad things come in three’s but not in this case. These three were quite the trailblazers in my field and there aren’t many like them anymore.

So long Killer B’s and enjoy retirement—you certainly deserve to.

Brent, Bob and Berman the first stop as we pass the mic around another edition of the Naborhood–as always thanks for stopping by.

BRADY BASHING: Speaking of B’s—-time to weight in on Tom Brady. Many say his latest Super Bowl insures he is the greatest quarterback ever—I thought he was before breaking the Falcons’ hearts and to me, it’s really not even close anymore.

It amazes me even after giving us the best Super Bowl comeback ever and then taking the high road against a commissioner who sat him for the first four games (don’t get me started)–that people continue to not like Tommy Terrific. 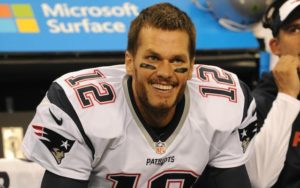 According to Nielsen’s celebrity index, Brady’s “awareness” score ranked highest among NFL players this year, but his “likability” score fell into the bottom 3%.

Don’t get it? Or maybe I do, they’re all jealous. Envious of his five rings, and then you have the wedding ring worn by his supermodel wife, the man has everything or so it seems. The guy says the right things, has never been in trouble and by all accounts is a great teammate and father. What’s not to like?

Brady is certainly the best of all time but to me it’s not Joe Montana who is right behind him it’s John Elway who like Brady was successful without many All Pro’s in his huddle.

Montana had Jerry Rice, Terry Bradshaw had Lynn Swann & John Stallworth and Peyton Manning had Marvin Harrison and Reggie Wayne. Brady didn’t have Gronk in the Super Bowl and never won the big one with Randy Moss—he won with different role players who aren’t close to Hall of Famers. It’s as impressive as his second half against Atlanta. 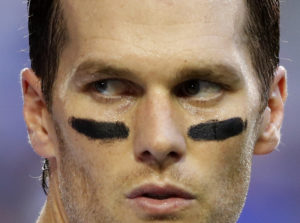 Keep laughing folks, I think Brady can do it and be the NFL’s version of Nolan Ryan–we will see. 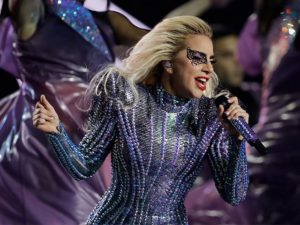 Recently, the critics were hardly Goo Goo over Gaga.

Let’s get this straight–the superstar repels off the top of Reliant Stadium in Houston then precedes to flip on to the stage only to dance around, catch a football while not pulling a Mariah Carey on stage. Did I mention, no controversial political rants.

Yet, Lady Gaga was ripped apart on social media for everything from her looks to her showboating to well….you name it.

It seems it doesn’t matter who is playing at halftime of the Super Bowl—according to the many “experts” out there—everybody looks terrible, sounds terrible and at the end of the day is a complete mess.

I remember watching The Who deliver a great show at Halftime of Super 44  (I’ll save you the Roman numerals) and many watching from home thought they were outdated and overrated…. 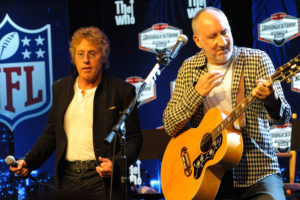 I think the NFL does a lot of things wrong: Thursday Night Football, Roger Goodell, Bountygate and Deflategate  just to name a few—but the one thing they own are those superb halftime shows. It should appeal to everyone but seems to just alienate almost everybody.

Yes we could have done without Janet and Justin a decade ago. Funny how that worked out–Timberlake took off while Jackson flatlined?

The point is if the Beatles were still together and played halftime, I’m sure they would be crucified on Twitter for bad haircuts and goofy smiles—nobody seems to be immune these days…. 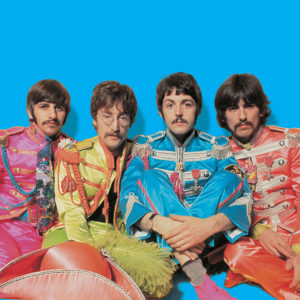 The message—it’s actually ok to like something these days, even those polarizing Super Bowl halftime shows. For years they were actually better than the games but nowadays the stars are taking more heat than the players it seems.

RYAN VS CAM: Falcon Fallout from Super Sunday was full of doom and gloom but I was greatly impressed with how Atlanta quarterback Matt Ryan  handled arguably the toughest loss in NFL history with pure class afterwards. It was a far cry from watching Cam Newton pout after losing to the Broncos a year ago. Newton could take notes from Ryan who acted like a leader and answered every question, including a few one on one’s.

RETURN OF THE GRANNY: Be honest, how many college basketball players can you name?

My list is short but I’ve found easily the best story in college hoops this season resides in Gainesville which has welcomed back a unique family tradition.

Rick Barry amazingly made his mark by attempting his  foul shots underhanded throughout his Hall of Fame career. Even though he rates fourth in free-throw percentage (89.98) in NBA history, per Basketball-Reference.com, few players have followed his lead. One of the few is Barry’s youngest son. 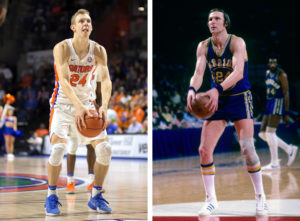 The Gators senior, who transferred from the College of Charleston has been right above the 80 percent conversion rate from the charity stripe for the majority of this college hoops season. Like his dad, Barry has done so shooting “granny style.” At one point he made 41 straight granny’s this year—gotta love it!

Love this quote from Canyon via SEC Country. “I’ve gotten heckled before. I think the funniest one was in high school — I missed a free throw and they started chanting, ‘You’re adopted.’ That was actually a pretty funny one. I had to give them credit for that,” Barry said. 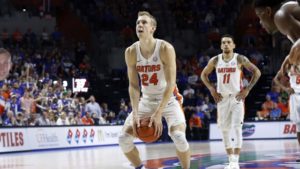 While Barry’s other talented sons who made the NBA didn’t try his trademark shot, Canyon decided prior to his junior year of high school that he wanted to give it a try and said it wasn’t until last season, when he knocked down 60-of-71 attempts at College of Charleston, that it felt natural to him.

It’s not all about the Granny though, Canyon liked the academic opportunities available in Gainesville. He is pursuing a graduate degree in nuclear engineering after studying physics as an undergrad.

AWESOME AL: I remember when Ipod’s first came out and I thought about what I was gonna put on my playlist. Some of my first choices were from the late and always great Al Jarreau.

While 2016 took more than its fair share of musical legends, 2017 you’re hardly immune. Al Jarreau was a one of a kind and I was sad to hear off his passing at the age of 76 where I regret never seeing him perform live. 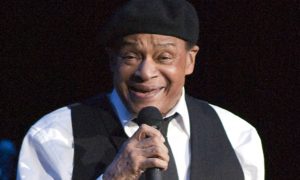 Nicknamed the “Acrobat of Scat” for his innovative vocal stylings, Jarreau released more than 20 albums over the course of his career and achieved success that rippled from jazz into the genres of Pop and R&B music.

(1) Mornin’ —classic Jarreau I can remember hearing this song as a kid and being reminded how much I loved it decades later.

(2) Never Givin’ Up: Not one of his most famous songs but another classic case of how many of his songs had a different flow to them. His voice was a one of a kind.

(3) Moonlighting Theme: this will take you back to the 80’s–one of the best soundtracks of all time.

Honorable Mention: We’re In This Love Together” –great song and his most famous but it didn’t crack my top three.

NIMA Helmets: One of the hottest and most innovative sports technology gadgets could be the hit at your next tailgating party. Check out the NIMA Helmet Speaker. It’s a revolutionary wireless portable speaker shaped as a football helmet and is now available in every NFL team and many colleges as well. 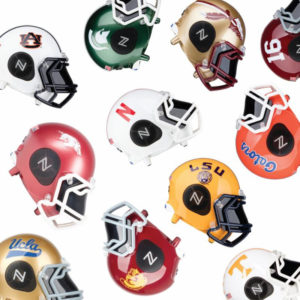 Everything about the NIMA Helmet is a leap forward in technology and design. It’s been engineered from the ground up for pure performance. Available in 3 sizes, NIMA Sport’s Football Helmet Bluetooth speaker delivers clear, organic natural sound with deeper bass than other speakers. It connects wirelessly and its premium material design – months in the making – coupled with its customizable high-gloss finish, adds a new level of team pride for any fan looking for a complete audio experience. 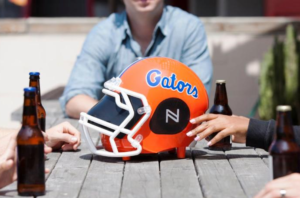 It allows you to enjoy exceptionally clear acoustics whether you’re cheering on your favorite team at home, in the shower, at a tailgate or at a BBQ – as loud as you like.

They come in three different sizes and retail starting around 149.00 where you can order them at:  www.nimausa.com

How in the world is Terrell Owens not voted in? Sure he was a bad teammate at times but the man was second all time in NFL history in receiving yards AND third in touchdowns? Those are easily first ballot numbers—but instead TO has missed two rounds of voting which is a shame. A lot of bad guys in the hall, badder than Owens, enough already—let him in. 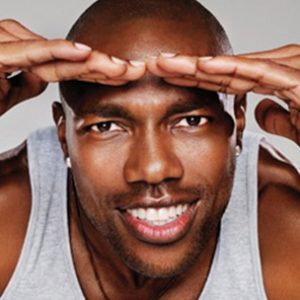 A side note on the Football Hall is how can they induct Jerry Jones and leave out Jimmy Johnson ? Jones would be nothing without Johnson who in my opinion should have been in before Tony Dungy. Johnson was 9-4 in the playoffs while Dungy was 9-10 and Jimmy has one more Super Bowl ring and a national championship too?

EXTRA POINT: Love those Girl Scout Cookies which have certainly stood the test of time and while Thin Mints are the proverbial favorite–they’re third on my list behind Tagalongs and those sensational Samoas! We touch em all in the Hood Folks….