I say appreciate the small stuff, especially when it turns out to be the good stuff.

So recently  I’m behind the wheel returning home from a meeting in Ft Lauderdale to Tampa  and I’m off in driving dreamland ….. 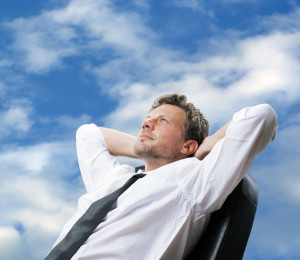 Suddenly, I wake up to find I’m in the middle of infamous Alligator Alley on I-75 with not one bar left on my gas gauge—whoops……

My next thought “I’m done and what am I gonna do not if —but when I run out of gas here?!” The thoughts went from “I should have signed up for AAA to I’d give anything to have jumped on the 15 previous exits when I had a chance!”

Knowing the end was soon near, I saw in my horizon an exit on an Indian Reservation with a warning that this would be the last one for the next 40 or so miles….I was damn lucky.

My point—so many times in life we dwell on the bad things and forget all the times we could have been dealt a worse hand.

From police giving us warnings, to a stranger finding our wallet to yes, finding an exit when you made mental reservations and suddenly found an oasis in the form of an Indian reservation. I appreciated being spared  the next few hours on a side of an empty highway.

Sometimes we need to all sit back and appreciate the times we absorb the good stuff albeit when its the little things.

Avoiding minor disasters, our first stop around the Naborhood. Make sure your tank is full and as always, appreciate you stopping by!

FIRED UP ON FIREWORKS: OK, I don’t hate many things but there are some exceptions—-the Yankees, rude people, middle seats,lima beans and of course …..Fireworks??! Never have liked them and really don’t get them. 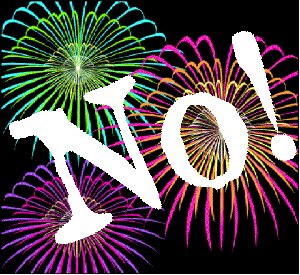 I admit, I used to hate them more when my kids were babies. The monotonous neighborhood sounds of firecrackers and bottle rockets would  force bedtime to be moved hours back but these days all the background noise is just a nuisance. For me, you’ve seen one fireworks show, you’ve seen them all. I like sparklers with my girls but I just don’t get all the excitement.

In this day and age of Social Media, you have grown men and women putting pictures of their fireworks on Facebook or Twitter?? ( all of the pics look the same by the way and there is a reason for that–BECAUSE THEY ARE ALL THE SAME SHOW!!) 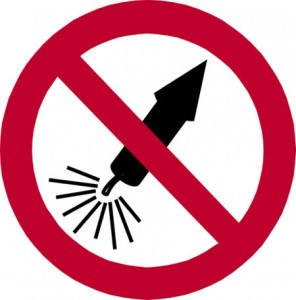 What really gets me is the Fireworks fanatic who buys so many they let them loose not just on the 4th but for the days and days after the 4th. This is the same guy who loves fireworks so much he or she lights them off for everything that smells like a holiday.

How bout we keep it simple—New Year’s Day and our country’s birthday and that’s all we need right?  Let’s put a stop to Cinco De Mayo and St Patrick’s Day fire fiestas??

Ok, I’m done ranting but Fireworks are the most overrated thing we have  but several subjects are in their hemisphere. Here are my top five overrated things—feel free to share your list…

(2) REALITY TV—Started off interested and somewhat curious but can’t stand it now. Its ruined modern TV and has hurt creative people whose shows tnow never get a chance because this stuff is produced so cheap. I long for the days of Cheers, All in the Family and more recently Curb your Enthusiasm…let’s say goodbye to Big Brother and the like…..

(3) AMUSEMENT PARKS: Every time I wait in a long line with my kiddos on a hot day for something that lasts about :30 seconds–I get the feeling that everyone in heaven is laughing at me?  Its really crazy when you think about it. My exception–I love water parks but I’ll pass on the others except if my girls want to go, I promise I’m not grouchy with them.

(4) BED AND BREAKFASTS: They may be nice and cozy but when I’m on vacation, I don’t want to share a table with another family—nothing personal!

(5) THE ROYAL FAMILY: They seem nice and all but why do we pay so much attention to them….. 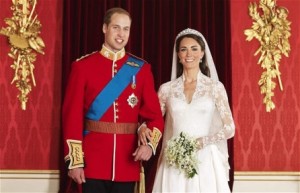 AMC RECLINERS: You have overrated and then you have overpriced. I’m talking going to the movies and even more specifically buying popcorn and a drink. Its crazy to me how the industry of movie theaters scratches its head over why attendance is down when they abuse the consumer.

It troubles me because I love going to the movies and want them to succeed. I don’t want to see the experience slip  like other favorite pastimes such as buying a book at an actual bookstore or grabbing my morning paper out of my driveway in logging on the internet—two American pastimes I fear will be gone in the next 10 years. Hopefully going to the movies won’t be going with it?

Recently help may be on the way as my favorite movie chain AMC is on to something big.TheWall Street Journal reports that the movie theater chain is spending hundreds of millions of dollars to install fully reclining La-Z-Boy-style loungers in more than a third of its auditoriums. That will mean fewer chairs, but AMC is betting it will also translate into higher ticket sales. 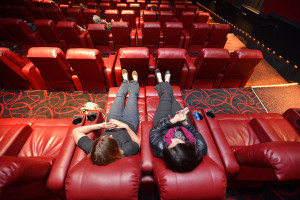 The company has already had success with the idea: Attendance at its 37 previously “reseated” theaters has increased 80 percent, indicating that people can be lured away from their couches and video streaming services with the promise of a big screen and comfy chairs. Similarly, box office revenue was up more than 60 percent at those theaters, AMC Chief Executive Officer Gerry Lopez told the Journal. That’s uplifting news for the U.S. film industry, which has seen domestic ticket sales remain little changed over the past 10 years, according to the Motion Picture Association of America.

MY NEW FAVORITE BASEBALL PLAYER: Unlike many in the media, I will not judge my baseball team until the All-Star break (yeah I still believe in my recently red hot Rays). There are too many Mr May’s and June’s out there—-its a long season folks??? I will pass judgement on a big league player who is now my favorite in the majors.

I like athletes who are different not for the sake of being different but are just true to themselves. I recently heard an interview with Brewers catcher Jonathan Lucroy and loved his honesty. His Milwaukee teammates pick on him relentlessly for being a Nerd and he simply embraces his inner geekdom. 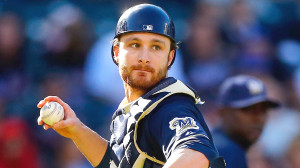 This self proclaimed Star Trek fanatic grew up in Eustis, Florida and unlike many of his peers is an avid reader.On the road instead of hitting the bars, he hits the local museums but isn’t a snotty intellectual, he clearly fits in with his clubhouse and can roll with all the kidding.

Oh yeah–Lucroy also is armed with a great story. He was undrafted out of high school where the Florida native was ignored by baseball coaches from Florida,FSU and Miami so his only option was to play at Louisiana-Lafayette where he turned himself into a major leaguer. This season he was named to the All Star team where he is one of the best defensive catchers in the game and currently is hitting .327. Hardly nerdy numbers for a MLB player who is easy to pull for.

NOBODY ASKED ME BUT….I’ve said it often here that I’ve never had a problem with Lebron James. The guy has never been in trouble off the court and the biggest so called mistake he made resulted in a decision that gave millions of dollars to charity. He can’t help it that ESPN drools over him like a teenager at a One Direction concert.

Can you imagine the NBA without him though??? The Spurs are great yet boring. Carmelo is selfish, Kobe is aging and nobody wants to talk about Donald Sterling anymore.

Lebron is a free agent again and can do whatever he wants but if I was him I’d take my Cleveland mulligan and dribble back home. He won in Miami—now he CAN go home again and win there while winning over a home base he clearly still has feelings for. Nobody in Miami will feel the way Cleveland felt when he leaves South Florida. Its one of the worst sports cities in our country. 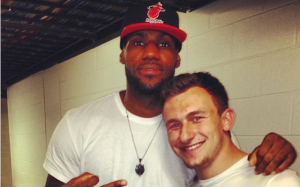 James back in Cleveland along with Johnny Football—-now that is a Nike fantasy. Maybe King James will keep Manziel away from Beiber too…..

EXTRA POINT: Enough of this futbol—I smell the real stuff right around the corner….