Not sure about you, but I’ve never seen a Sunday Sports Day quite like this one.

Sunday is supposed to be a day of rest but this past Sunday left most of us restless.

In one heck of an emotional heart tugging 24 hour period–we saw seemingly shocking stories coming in from all directions. The day featured the firing of a colorful yet often polarizing head coach in Les Miles who was smarting from a loss in Auburn which was decided in literally the final second. Ironic that Miles last straw was the kind of game he won for so many years in Baton Rouge. 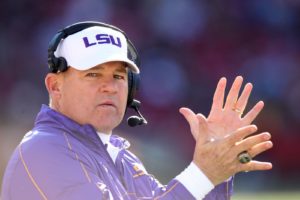 We saw the Sunday Swan Song of a baseball legend in Vin Scully who deservingly got to exit the press box by calling a walk off homer for his victorious Dodgers. This after an amazing 67 years of calling baseball for one franchise. That will NEVER happen again. 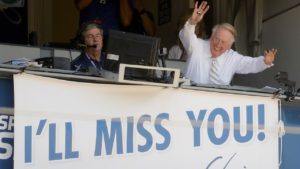 If only Jose Fernandez could have left his sport as gracefully where his untimely death on Sunday left everyone who knew him feeling sad and forever incomplete.

You see on this Sunday we lost both Fernandez and unbelievably golfing legend Arnold Palmer too. They may have played different sports in different eras but the common thread was the outpour of emotion from everyone who knew both men even though they were separated by 63 years of age. 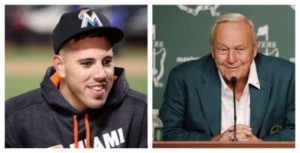 That is the sad part. Palmer got to live his life to the age of 87 while we say goodbye to Fernandez at the tender age of 24. Jose’s story was much more than baseball as he saved his Mother’s life in his fourth attempt to escape from his homeland of Cuba. He was a growing legend in South Florida and his adopted home of Tampa as seen by the reaction of his teammates and fan base upon learning of his death. 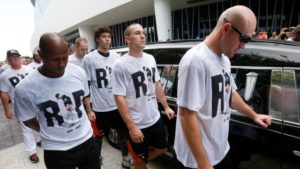 While first and foremost his family will miss Jose Fernandez, the sport of baseball will miss him dearly–he was on his way to being arguably the game’s top ambassador and maybe the highest paid pitcher of all time. Miami was set to host next year’s All Star Game and Fernandez would have been front and center. The sport needed a face where since Derek Jeter exited the batter’s box–currently many of MLB’s stars are faceless, but not Fernandez who was coming off what he thought was the best start of his career where he struck out 12 and retired 21 in a row.

Pedro Martinez says the young man had more talent than him but unfortunately we are left wondering what could have been….

His story the most sad in a Sunday like we’ve never seen, hopefully we won’t see one for the most part like this again.

ANTHEM ANGST: While Fernandez fought for his freedom, many in this country who have always been free are debating the right to sit and stand for the national anthem.

The debate was kicked off by San Francisco quarterback Colin Kaepernick. While I think he has every right to do it, I would like to see like any problem in our country—someone offer up solutions to the table. 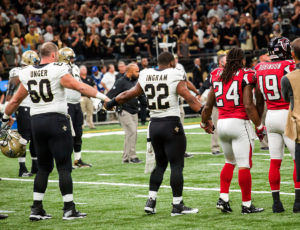 I saw a great one in New Orleans on Monday Night as the Saints and Falcons came together for a pre-game circle of solidarity during the anthem.

It was a refreshing sight to see.

Black, White and Hispanic players held hands to show that we can all come together and respect both the anthem and those who feel upset in what is happening to many minorities in our country.

That is more of what we need in this country—solutions and solidarity over anger and angst—hope it leads to some resolution on this polarizing debate.

REALITY FOOTBALL: I’m a big fan of the HBO reality series Hard Knocks. It provides unbelievable access to a different NFL team in Training Camp each year, but we know have a new leader in the football reality TV clubhouse.

Showtime’s “A Season with Florida State,” is not only better than Hard Knocks, it’s so good I don’t know how they pulled it off and furthermore, how FSU or any other college would agree to it. 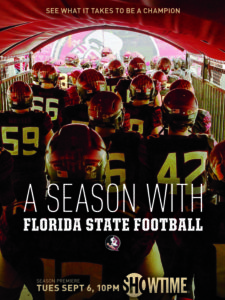 Sure it’s good for recruiting, Notre Dame did the show last year and got a boost but wow they have over 30 cameras not only canvassing practice every day but they are in these student athletes faces on the sidelines as well.

I wonder if Fisher had second doubts when his team was getting lit up by Louisville if this was a good idea? Please don’t stop, this is fantastic TV and kudos to Showtime for getting the access and convincing these schools to do it.

Next year, I wanna see Saban all access-make it happen Showtime?

MORE FROM “MORA”: You know a coach who would be perfect for our current Reality TV age–how about the ageless Jim Mora. The now retired 81 year old former Saints and Colts  Head Man and author of the infamous “Playoffs??!, Diddly Poo and “you think you know but you don’t know” rants still hasn’t lost his fastball.

I relish the chance to catch up to Mora who couldn’t be friendlier when I routinely see him in the press box where he now moonlights as an analyst for the local NBC affliate in New Orleans.

Recently he was asked after a game about the potential of the Saints’ season being over after three games? His response was classic Mora:  “You just said the season is over,” Mora said. “That is the most negative statement I hear from fans and media ever. It bugs me. Is the season over? No. Thirteen more games to play and you are saying the season is over! Unbelievable.”

I wish more coaches were as colorful as the Mighty Mora who was ahead of his time and would have been a Social Media sensation….get that man a Twitter account!

FIVE SECOND RULE: I don’t know about you but I made it to almost 50 by steadily obeying the “five second rule.” You know the drill—it’s ok to eat something if it’s only touched the floor for “5 seconds.”

According to the New York Times, Professor Donald W. Schaffner, a food microbiologist at Rutgers University in New Jersey, said a two-year study he led concluded that no matter how fast you pick up food that falls on the floor, you will pick up bacteria with it. 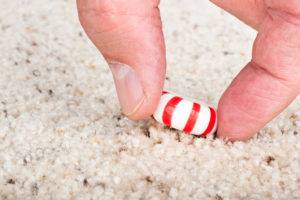 The findings in the report — “Is the Five-Second Rule Real?” — appeared online this month in the American Society for Microbiology’s journal, Applied and Environmental Microbiology.

Researchers at Aston University’s School of Life and Health Sciences in England reported in 2014 that food picked up a few seconds after being dropped is “less likely to contain bacteria than if it is left for longer periods of time,” giving rise to news accounts suggesting that eating the food might be harmless. Those findings, and research done at the University of Illinois in 2003, did not appear in a peer-reviewed journal, Professor Schaffner noted.

With all due respect to the good doctor, I think it’s all about where and when. I only implement it the rule at home where I can control things—if it ain’t broke don’t fix it…

NOBODY ASKED ME, BUT…. The Gators just welcomed in a new Athletic Director to replace Jeremy Foley, who was the gold standard in many ways. Foley won 27 National Titles and wait for it….130 SEC Titles in making Florida great across the board.

I like the new guy though in Scott Stricklin who to me is a lot like Joe Maddon who went from the low payroll Rays to the hardly thrifty Chicago Cubs. 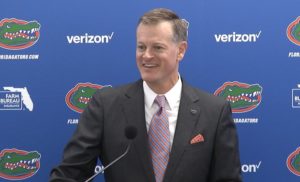 Stricklin comes from the lowest revenue athletic department in the SEC (Miss St) to one of the best in Gainesville but I think he also brings something Foley doesn’t–the ability to work with the media better.

Foley kept a tight lid on the his athletic department, too tight for mine and many tastes–but Stricklin whom I respect because of his background in Sports Information knows the value of letting us all get to know the student athletes better.

For years, Florida has been very tough to cover because they have been so guarded, I’m hoping Stricklin changes that.

EXTRA POINT: So Tim Tebow hits a home run on his first pitch as a pro baseball player…? The guy may not be the QB the NFL wants and may not make it to the big leagues but he’s definitely never boring…I”ll root for anyone who dares to chase his dreams…keep swingin’ Timmy.