Hope everyone had a great Thanksgiving surrounded by the four F’s– family, friends, food and yes football.

Working on Turkey Day was therapeutic in a year which has been full of loss, the biggest being my Dad, where this was the first Thanksgiving without he and Mom—was kind of good to just focus on work, a job I am very thankful for.

Me and my siblings have spent a lot of time this fall sorting through Dad’s things and selling his house. It’s brought us closer together—truly cathartic experiences.

Sure sorting through the different pictures have brought smiles…. 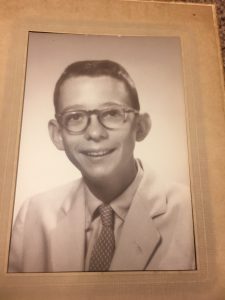 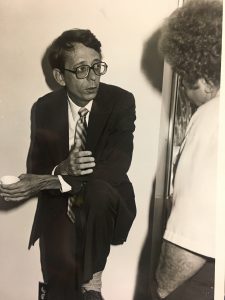 ….but it was more just reliving how special Dad’s life was. It showed who he was.

We found our Dad kept everything from special emails to all things involving our special achievements. He left behind so many of his books, mementos and furniture that he and my Mom had shared for years. It’s funny you hear stories of families arguing over possessions but my brother, sister and I didn’t have a single problem. We enjoyed going through his things and celebrating his life in the process. What was special to my sister was different for my brother and conversely different for me.

It wasn’t about material things, it was about holding on to our Dad as long as we could and we will never let go. People reflect on what they are thankful for this time of year and I’m truly thankful I got to enjoy 50 years with such a great man and going through his things reinforced how lucky we all were and are.

But….. one of his things I never thought I would want stood out and struck a chord when we cleaned out his house…. 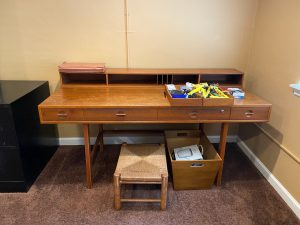 Just like many of Dad’s possessions, his desk certainly has stood the test of time. He bought this when I was in second or third grade but it remains as strong as he was.

I remember thinking how big this desk was when I was little, it still seems rather larger than life. Great memories of bugging Dad while he would pay his bills or finish off one of many legal briefs. He always stopped and had time for us.

I do a lot of my work from home and it feels right having this with me even though he no longer is…. or is he? Most days we are working together where this ole desk motivates me to be better, work harder, like he did until his last breath.

This ole desk is approaching its 50th birthday, a constant reminder of the great man who bought it way back in the seventies? Now we’re creating new memories as I currently type this blog on it.

Thankful for the ole desk, the first of many stops around this month’s stroll around the Naborhood. As always, thanks for stopping by.

LSU LESSONS: Another college football season has flown by where we’ve learned many things but has any school taught us more than LSU? The coach and his quarterback have served up some powerful pigskin prowess the past few months.

I’ll be honest, I thought it was a mistake to hire Ed Orgeron. After failing at Ole Miss, I just didn’t think he had the chops to take LSU where they needed to go and unseat mighty Nick Saban. I was dead wrong because Orgeron did want many coaches his age don’t—he adapted. His predecessor Les Miles never changed his offense and it cost him his job despite winning a Natty, Coach “O” wasn’t gonna let that happen to him. 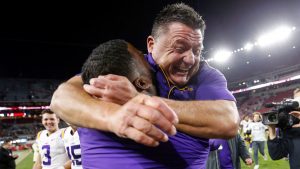 Hiring a hot offensive coordinator in Matt Canada and quickly getting rid of him, I thought here we go again yet Orgeron brought in young Joe Brady from the Saints to complement veteran mind Steve Ensminger and they haven’t lost a game since.

Which leads us to LSU quarterback Joe Burrow where the lesson is see your players’ strengths and build a scheme around them. Burrow was good last year, now he’s elite because of what the Tigers have done. Before the season he was a mid to late round pick, now he will win the Heisman and could be the first player taken? Crazy stuff but worth learning from. 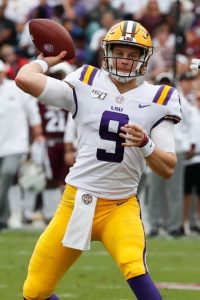 These LSU Lessons are powerful—coaches need to adapt and build a scheme to their players’s strengths. Many a coach has been fired for failing to do this and many players’ talents have been wasted by not having their coaches capitalize from their unique skills—good to see the Tigers serve as teachers this fall.

Hopefully other teams will follow their lead moving forward.

DAMON & BALE: Have had the honor of reviewing sports movies for years and it was fun screening the recently released Ford vs Ferrari in Los Angeles where I’m not a big car or racing guy, but I really liked this film and would highly recommend it. Great adaptation of a true story where sure it’s about cars and racing but it’s also a story of friendship and rooting for the underdog.

Funny side story when I interviewed the two stars of the movie Matt Damon and Christian Bale, we usually only get about 7 minutes in these settings but when I sat down I told Boston guy Damon that I cover the Saints and they should have played the Patriots last year in the Super Bowl—-yes a reference to the no call?! 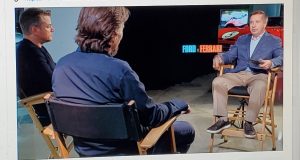 Damon loved it and agreed, then he showed he was a football fan by noting the Saints had a bad ending two years in a row (making a reference to the Minnesota Miracle) We were into the conversation when Bale looked at us and said “What are you chaps talking about?”

Damon then impressively gave Bale a detailed description of the no-call where afterwards Bale said “I can sit this (interview) out if you guys just wanna talk (football.)”

A fun exchange where afterwards I had to ask Damon being a big fan of the highly underrated “Rounders” movie he starred in decades ago—I asked him if we will ever see a sequel? If ever a movie needed one, it was Rounders. 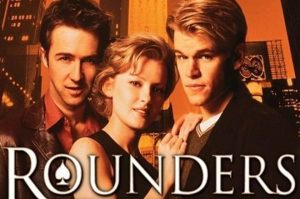 He told me one is already written yet the movie studios these days don’t have a big demand for it. It seems they crave more of the Marvel comics model which is a shame.

If you haven’t seen Rounders, you won’t be disappointed, just like Ford vs Ferrari.

NEW INVENTIONS: Time Magazine had an interesting recent issue where they dished out the best inventions of 2019 where I know we say this all the time but it makes you wonder what they will have for us in 10 or 20 years?

Time tells us 2019 brought us better vitamins, more efficient protein bars even a kayak to go? Then you have after seven years of research…. fully recyclable sneakers?! 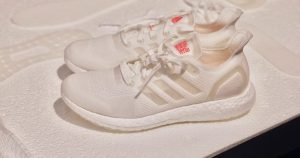 Adidas has developed the FUTURECRAFT. LOOP shoes where instead of throwing the shoes away, you can return them back to Adidas so 100% of each shoe can be recycled.

James Carnes, VP of Global Brand Strategy at Adidas says “The FUTURECRAFT.LOOP is meant to be the first step to “clean up some of the environmental impact that we create through our massive product creation every year.”

Good news for the environment but the bad news we can’t try these on until 2021—creative trend though.

REPLAY RULES: Back to football where the NFL season is nearing its finish line and I think we can do something those replay officials can’t —agree. Agree this new replay rule for pass interference calls is a disaster.

I have never been one to blame the officials for my team not winning yet that changed after covering the “no-call” in last year’s NFC Championship game— but this year we have thrown gasoline on the fire. 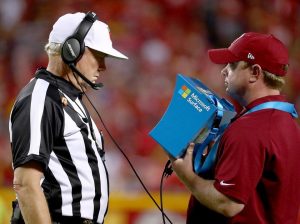 It amazes me how different refs call games in the NFL especially in regards to pass interference but what is really baffling is upon further review—the fact that the replay minds still can’t get it right?  There was an NFC Championship game like PI in Houston a few weeks ago and when it was reviewed, was not overturned?

We’ve seen a few of those this year along with having minor PI calls get overturned? You might as well go back to not having them reviewed—it would shorten the game and keep us all from pulling our hair out?

Drew Brees told me after a recent game it is supposed to remove those “blatant” calls—it certainly hasn’t.

NOBODY ASKED ME, BUT… Some people go the extra mile and then you have my sister who I’ m here to tell you is the Aunt of the Year in 2019. Good ole Ariana Grande sent us for a ride this year as she cancelled her concert back in May and then rescheduled it for November here in Tampa.

Knowing I couldn’t make it in November, I took my daughter to the one in Miami back in May and figured I’d sell the other tickets but then my sister had another plan. 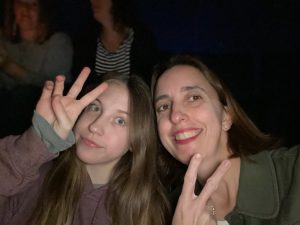 Busy with work she still flew down the Sunday of the recent concert, took my daughter and then hopped on a flight “the next morning”  and went to work.

I don’t know many sisters or aunts who would do that and on this month of giving thanks, me and my daughter Ally are extremely thankful for her! 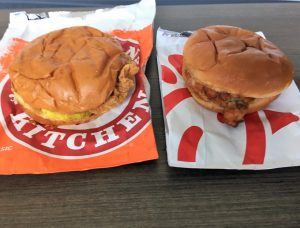