They say everybody loves a winner, well I guess “everybody” forgot about Tom Brady.

Nobody has won more than Brady but the words “great” and “hate” have become synonymous with all of his success. I mean how many times have you heard someone say it,  “I really hate Tom Brady.” or “I like the Bucs but I just hate Tom Brady?” 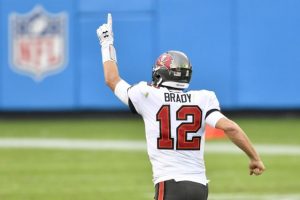 People get tired of too much success, they want new faces, new winners, his now seven rings are way too much of a good thing. Others are jealous, they don’t want anybody to have success, especially the kind that Brady has garnered.

They hate he’s good looking, hate he has a beautiful wife but the biggest hate factor for Tompa Tommy is they hate, he wins and wins and wins…..

Michael Jordan won and he wasn’t hated. Derek Jeter won and won and was adored, why is Brady on this desert island full of haterade??

Brady’s never been in trouble with the law. Ok, the NFL convicted him of deflategate, but c’mon are you telling me that is the reason for his success and furthermore no other NFL QB has deflated footballs? Several have admitted so! In a recent article by Athlon, deflategate was the number one reason people hated Brady along with issues such as his whining, being privileged, playing for the Patriots winning machine for so long and media bias.

Brady’s been the ultimate teammate, have you ever heard a peep from those who have played with him? Actually it’s the opposite where his Patriots teammates loved him and his new Bucs mates, from rookies to veterans, couldn’t believe how grounded this future Hall of Famer was. 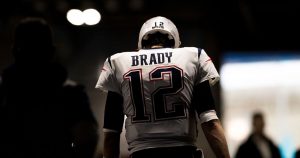 His story is one of the ages. Brady wasn’t given anything, isn’t an elite athlete and has had to earn every step of his success. He was hardly a big recruit coming out of high school, was benched at Michigan for an overrated Drew Henson and for crying out loud was a six round draft pick? Brady is the consummate grinder.

Then you have what’s he’s done this year, which to me is the most impressive. He leaves the Patriots and heads to Tampa with no offseason with his teammates, withstands an up and down season where he inadvertently loss track of downs in a loss versus the Bears, endured arguably his worst game as a pro in a 38-3 loss to the Saints yet Brady still rallied the troops for an improbable run to a Super Bowl Title?

Speaking of his latest title, afterwards it came with Brady looking like one of the guys celebrating with more than a few rounds of avocado tequila and then throwing the Lombardi trophy to his teammates on the boat parade. That made me like him more…. 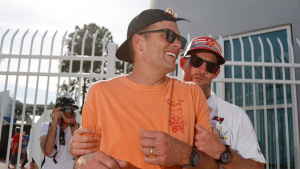 Oh and there’s the fact he’s 43 years old?! He threw for the most touchdown passes in 13 years and the fifth most single season passing yards in his career. What’s even more impressive is he truly elevated the Bucs mindset on both sides of the ball. I love the story of hearing one of his teammates cry in joy after winning the NFC Championship game where Brady told him, we still have more work to do. Being a winner and and an elite leader aren’t always built in one player but the exception is the hated Brady.

I’ve never seen an athlete this good, this hated. Maybe it’s the social media era we live in as Lebron James has accumulated more than his share of critics but like Brady, King James has been a model citizen and an elite talent for so many years.

Let’s appreciate the great, and disregard the hate—-Tom Brady’s run is special where can you imagine if he keeps this up for another few seasons?

They may hate him more than ever???

The Brady hate factor, the first stop in another run around the Naborhood, as always thanks for stopping by.

SOPRANO’S PREQUEL: Given our many choices and newfound free time this past year, we all have our guilty binge watching pleasures where recently getting HBO Max, I noticed you could watch one of my favorites of all time and even noticed I missed several episodes I’m still catching up on?? Yes the Sopranos were rough and tough but it’s arguably the best television show….ever. Perfectly cast where the acting, the writing and the stories were top notch, yeah the ending was a little weird but this show was so good in so many ways. Now Sopranos fans have something to look forward to in the upcoming prequel, “The Many Saints of Newark” which traces the early life of Tony Soprano where the great part is it’s played by the late James Gandolfini’s son Michael. The crazy part is that Michael was born in 1999 (amazingly the same year the Sopranos debuted) and he hadn’t seen an episode until this past year? I guess that makes sense as the show isn’t fit for a youngster and Michael only recently turned 22 but it’s amazing he gets the chance to play in the role his father made legendary.

The Sopranos prequel is centered around the 1960’s Newark riots where tensions between African Americans and Italians were high, a period where young Anthony Soprano was just learning the family business. It will feature mastermind David Chase who created the six seasons and 21 time Emmy winning Soprano series—can’t wait!

TIGERS’S DOC: Speaking of must see TV, even if you’re not a sports fan, you will find the recent documentary on Tiger Woods fascinating. It was of course made and unveiled before Woods’ recent car crash which nearly killed him and could have easily have left him without the use of his legs. Yet another chapter in what’s been a seemingly real life reality show of extreme highs and lows. 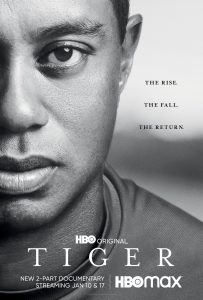 This doc created by Matthew Heineman and Matthew Hamachek was revealing in many ways. You really got a feel of why Tiger grew up the way he did as a lot can be attributed to his overbearing father Earl Woods who while harnessing his golf ability didn’t allow Woods to be a child or a normal teenager. While Tiger didn’t approve of this very private production, it was interesting to hear from his kindergarten teacher, childhood friends and his high school girlfriend who shared rare glimpses into his private life. You never know why a person turns out the way they do or truly what goes on in their lives, this doc provides lots of pertinent perspective.

For so many years, we didn’t know anything but golf from one of the most iconic athletes ever, but after Woods’s public divorce and subsequent scandal that all changed. This documentary delivers interesting insight into why he would later have problems. I give the creators a lot of credit for making this substantive despite many key figures obviously refusing to participate. Well done!

CLIF-DIVING: We constantly hear about greedy corporations, so it was refreshing to read the background of quite the contrarian in the business world, the innovative founders of the popular Clif Bar. Back in 2000, founders Gary and Kit Erickson could have sold their company to Quaker for 120 million but decided to hold off and then preceded to take a 60 million dollar loss while simultaneously taking a lot of chances along the way. The big goal for this company was the creation of something bigger for themselves and those they brought on board. 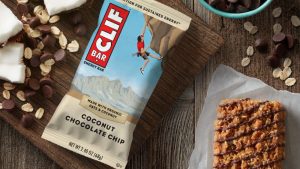 In the coming years they set five goals: sustaining the business, building the brand, nurturing the staff, the community and finally the planet. Many companies have embraced ESG (environmental, social and corporate governance models) but Clif Bar dove into a deep pool of ideals. They have donated thousands of hours which grew to hundreds of thousands of hours in community service. Their projects included creating hiking trails, planting sagebrush seedlings after the California forest fires and even sent 35 employees to week-long shifts to Ohio to remove trash from the Ohio River.

Today in this uncertain economy, this company is thriving and in turn have produced a unique workplace where how about these benefits: long-term employees have a retirement trust, they are granted sabbaticals after seven years of service, they receive on-site child care in California and Clif bar provides every employee with an annual athletic event stipend of $350 dollars for needs such as marathon entry feeds. What a great example of what big business can do for the community, their workers where give this business credit for not cashing in 20 years ago, the perseverance paid off as they are a model for many moving forward.

NOBODY ASKED ME, BUT…. I feel for many during this pandemic but especially those teenagers who lost their normal senior year, prom and high school graduation and while many are back in school, several are not and that includes my youngest daughter who is a sophomore in high school (not pictured here). She like many around the country are choosing to stay home as many of their best friends are doing the same…… 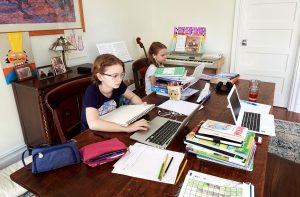 It’s coming up on a year when she was last in a classroom and I know that isn’t something her or her friends signed up for but the silver lining comes from what I hear from her bedroom (which is now her high school classroom) a handful of times each day. You see, I work a lot from home (even pre-pandemic) so selfishly it’s been nice having her spend more time with me– so with that my favorite moments of these COVID days are hearing her laugh with her close set of friends whom she shares both classes and homework sessions with. I look forward to it multiple times a day.

Yes these COVID kids have been cooped up for far too long but hearing her occasional loud laughter from her bedroom makes me feel like she’s getting something out of this craziness—hopefully she can laugh with her friends more in person very soon.