2020 has tested our resolve and highlighted our differences.

It seems at every corner we have sharp divides….

I think I do know something we can agree on? How about “time” —specifically its pace the past few months….

How long ago does April seem? 10 years?

We all get the drill, this year time has seemingly stood still since mid-March when the pandemic forced the end of social interaction, school, sports and seemingly everything else.

We have had to learn to live differently, more patiently yet maintain our productivity and at times our sanity.

The pandemic hasn’t played favorites, it’s affected us all but in a world where we often can’t believe how the months fly by, 2020 has delivered us all the most unpredictable change up.

Think about something you did in February this year compared to most years? The differences are striking. So many times in life we want things to slow down whether it’s the maturation of our kids or the daily passions we have for work or just the simple things in our life.

Maybe we should all think about that when we continue to evolve in this pandemic time machine?

The hardest thing is the unknown–where the big question remains….when will it be “time” to return to normal?

I think we all have that thought in common too…….

Time travels, the first stop in another jog around the Naborhood–as always thanks for stopping by.

ARCHIE MANNING: Recently I enjoyed one of the best experiences of my broadcast career, a few hours driving in New Orleans with arguably its most popular resident, Archie Manning. It’s ironic the patriarch of the most popular football family ends in the word “arch” because Archie’s life has been unbelievable, especially to him.

This is a man whose father died when he was 19, a sophomore at Ole Miss. Manning found him after he committed suicide yet would see his life go places and take turns that were unprecedented. He never enjoyed a winning season as an NFL quarterback, the majority of it with the putrid Saints yet went on to enjoy the careers of two of his sons who will both be Hall of Famers one day.

In a series called “Errands” I created where we run them with sports personalties. Our goal is to get to know them better away from the usual media horde— it was fun getting to know Archie. He took me to his restaurant in the French quarter, to the high school field where not only all three of his boys shined but currently his grandson “Arch” is one of the biggest QB prospects in the country and then we finished with a tour of the prized memorabilia in his home along with checking out a workout room he created to keep in shape during the pandemic. At the age of 71, Manning tells me he still works out six days a week despite several injuries which would have held many back. 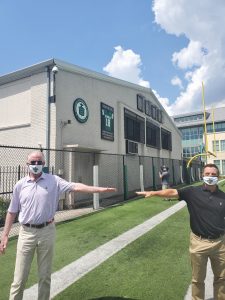 Manning is unique in so many ways especially when it comes to the man he is. Even with all of his success and the stardom of both he and his sons, you wouldn’t know it by meeting him. He’s as humble as they come where despite losing his Dad at an early age amazingly Manning became the model for many of what a Dad should be. Manning is proud of his boys but doesn’t brag and enjoys ribbing them too. I throughly enjoyed my day with a man who is a living legend but would shake his head of any such moniker. Modesty one of his many admirable traits.

The full episode of Errands with Archie Manning coming to all of the Saints social media platforms this fall.

US “WEAK”LY: In this blog, I like to jump around different topics so there is something for everybody which leads me to US Weekly. For years I would see magazines like this at the airport or checking out at the grocery store counter but recently some service thought is was a good idea to give me a free subscription?!

I received my first issue last month and thought I would give it a shot but after about five minutes (or maybe two minutes) I got the gist of it—no substance, no credible sources yet lots of catchy headlines, pictures and all out celebrity propaganda…..

Who reads this stuff? Who pays for this stuff? Obviously many people as it’s been around forever.

I’ve tried a few times to cancel it without success (even though it’s free) where to be honest it’s embarrassing every time I open up my mailbox and pull it out with the rest of my mail??

I get it— stop being naive, this tabloid garbage has been around for decades but this is the first time I’ve had it delivered—it’s crazy to me people actually pay money for it?!

It’s like comedian Jim Gaffigan so accurately said Us Weekly is like “McDonalds for the soul” not good for you friends…..

FOOTBALL FUTURES: This time of year is usually one of the best if you’re a football fan as you know the waiting is over and the main course will soon hit the table— but 2020 has given us a different August.

We’ve lost preseason games, college football conferences and for many already the entire season. I’m aware the loss of life is way more important than whether the Ivy League or the MAC will be playing football this fall but I feel great sympathy for the following:

(1) NON-NFL PROSPECT: Like many in high school who lost their senior seasons, this would spell the last fall for many college football players who have no shot at playing in the NFL. This is a brutal pill to swallow for many who worked so hard either to earn a starting spot or just a plain scholarship. Can you imagine that walk-on who grinded it hard for three years to earn a place on the team and maybe a little playing time only to now find out their career is over?

(2) MID-RANGE PROSPECT: You also have the plight of “this year’s” Joe Burrow. Remember at this point last year, LSU QB Joe Burrow was a nice player, a mid to late round pick but NO ONE had him becoming the top pick in this year’s draft. There is always a Joe Burrow, a player who uses his last year in school to improve his stock dramatically but this year it looks like there may only be a handful. I think of the Gators quarterback Kyle Trask who has so much to gain with a big fall but who knows how much football he will be able to play?

(3) BRADY BUCS FANS: I’ve followed the Bucs since my grandfather had season tickets in its first season back in 1976. He took me and my Dad and uncle to the NFC Championship game in 1979. I’ve seen them let go of Doug Williams because they were cheap, Steve Young because they didn’t have foresight yet swing and miss on the likes of Trent Dilfer, Josh Freeman and most recently Jameis Winston. 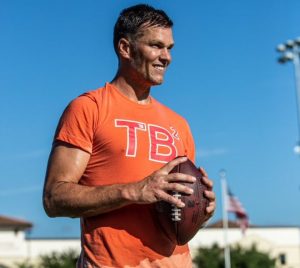 It’s amazing the Bucs have NEVER enjoyed a true franchise quarterback, yet now they have the best ever and can’t fully enjoy it, at least now anyway.

It’s a shame Bucs fans can’t see Tom Brady in Training Camp and for now aren’t able to watch any games in person. I know several media members who have covered the team for years yet haven’t been able to meet him in person yet.

I know, I know and agree there are much bigger problems than this. Life has been unfair to many during this pandemic but these football stories are unfortunate and I feel for all involved.

NOBODY ASKED ME, BUT.…I was in New Orleans recently where there is always a great new restaurant and my latest trip didn’t disappoint. I had just finished a run when I noticed a restaurant called French “Toast” and folks about 40 minutes later I had just enjoyed the best breakfast I ever had!

There are actually three in New Orleans and if I had time would have ate their breakfast all three meals that day. Sure in true New Orleans fashion, they were creative as I saw a family devour their patented “King Cake French Toast” which was similar to some of my daughter’s birthday cakes?! But I kept it simple and this place still delivered where this is the “after” picture……..

Their classic breakfast gave me honestly the best biscuit I’ve ever had, the best grits and by far the best bacon–all in one serving. NOLA’s “TOAST” is a must stop next time you are in the Big Easy—easily the best breakfast of my 51 years.

EXTRA POINT: I mentioned I love reuniting with XM radio in my last blog—-if you’re looking for a good channel check out channel 70 “Yacht Rock Radio” which celebrates the smooth-sailing soft rock from the late 70s and early 80s. You’ll hear artists like Michael McDonald, Christopher Cross, Hall & Oates and other titans of smooth music.