Most of us have a hard time putting down the cellphone—some harder than others.

I’m as guilty of it as anyone but know there are some places they should disappear.

Its hard enough motivating yourself to hit the gym but the reward for finally landing on the treadmill shouldn’t be listening to your running neighbor screaming on his or her cellular security blanket. It really drives me crazy where the sight of this makes me cringe….. 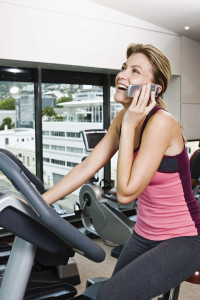 Hey—I understand bringing it in case of an emergency but folks as a Public Service Announcement: There is no need to be holding a phone conversation which can be heard (even with my Ipod cranked up) for sometimes the length of your workout.If its that important–stop working out and take care of business whatever your business is.

I saw a lady this morning laughing hysterically as she was talking on her elliptical—now that’s the kind of multi tasking that could pull a hamstring in a hurry. No need for it—call your buddy back after another successful workout—please!

So what do you do when you’re trying to run but others won’t stop with the cellphone hysteria? Its a public gym afterall and they pay for it too?? I have bit my tongue for months but it seems to be a growing epidemic. Please– can you help me get the word out?? Maybe we can start collecting cellphones at the check in counter like the young bucks collect keys before a keg party…..

Loud and obnoxious Treadmill Talkers the first exercise in this full blown Naborhood workout—takes for stopping by (and please turn your phone’s off for a few minutes….)

SAVING PREEMIES: While an irritating cellphone user isn’t a life or death problem—having a premature child surely is. My family knows first hand as my youngest daughter Ally was born two and a half months early and weighed in at just around 3 pounds. She wasn’t alone nearly a half a million babies a year are born in this premature fashion. 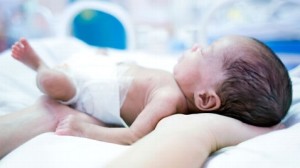 Time magazine had a great article this week on how modern medicine and technology has advanced in such a way the success rate is increasing at an astounding pace. The numbers are staggering—in 1960 the survival rate for infants under 3.3 lbs was 28 %. You fast forward to 2010 it was…..78%—now that’s progress. According to Dr Edward McCabe, medical director of the March of Dimes Foundation, “Every decade since the 1960’s, the age of viability has been reduced by a week.”

Yes even in the last two years, raising the standards of NICU unit’s around the country has saved the lives of many premmie babies—including my own. 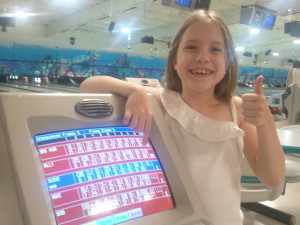 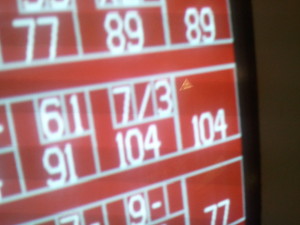 Ally is now 9 years old and couldn’t be healthier—the latest proof—this former preemie is fresh off breaking 100 on the bowling “alley” over Memorial Day weekend. With so much bad news on the medical and healthcare front—its nice to share some parts of the industry that are avoiding gutter balls.

JOHNNY VEGAS: As you know if you’ve read this blog before, I often defend my surrogate little brother Johnny Manziel. I’ve never seen a player  like him and look forward to see how he does in the NFL. At the same time, I find myself defending little Johnny all the time and yes that included his recent weekend excursion to Vegas which was another softball for his many critics…… 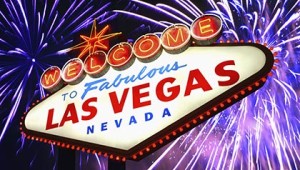 Its obvious Johnny Vegas doesn’t care about the naysayers. He couldn’t have scripted this one any better. A few weeks after he slips in the draft, Manziel slips into Sin City and is caught via Instagram with none other than fellow party boy Rob Gronkowski—the only thing that would have made this better was to fly Dennis Rodman in.

Hey if the New Orleans Saints coaching staff can take a Vegas retreat a week before the NFL Draft—what is the problem here? I checked the calendar and its May—now if this was during the season, I will be the first to come down hard on Johnny Vegas but people need to relax.

I know some say your QB needs to be more responsible and maybe dive into the playbook instead of diving into the pool at some resort?? Lighten up. Going to Vegas isn’t going to determine Manziel’s NFL success rate—his play will. The kid is in his early twenties and didn’t hurt anybody—let him be young and have fun. If it makes his critics feel any better—the so called spoiled and privileged brat did take the middle seat home with his Browns playbook in toe—-shouldn’t Johnny Vegas get points for that??? 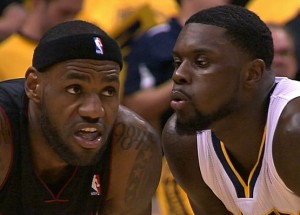 Give Lebron credit for his restraint—if this was Air Jordan, I think Lance Stephenson would have a broken nose. Its also proof those network cameras don’t miss a thing—makes you wonder what they may have missed decades ago when they had half as many.

BOSTON “WRONG”: The major league baseball season so far has been kind of boring. Lots of parity, lots of very LONG games and not many standout individual performances but things always seem to be fun when the Rays and Red Sox huddle up. Recently the Sox took exception with Tampa Bay’s Yunel Escobar stole a base with a five run lead. Escobar , who certainly can be irritating took exception with all the churping from Boston and churped back…..dugouts cleared… Red Sox outfielder/DH Jonny Gomes stormed out and tried to defend his team. A lot of huffing but like any typical baseball brawl—no punches were landed. 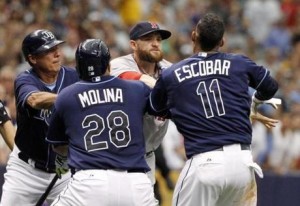 Hey, I’m a believer in the art of the unwritten rule—–I don’t mind you sending a message on the mound or sticking up for your teammates but Boston was Wrong here. First off, have you guys seen the Rays bullpen this year?? A five run lead is hardly safe, gotta get as many on the board as you can. Secondly, it was Boston who stole the extra base with a six run lead in theeighth during the PLAYOFFS last year and the Rays didn’t flinch. I like Gomes, maybe the best teammate in baseball and a grinder everybody likes to see play, but he and his Sox picked the wrong battle this time around.

Nice effort from both teams though to wake us up in a snoozer of a season so far though…..

“THE CHEF” DELIVERS: Its very early in the summer movie season but I have a recommendation for you out of the gate. “The Chef” written and produced by the talented John Favreau. After first seeing him in Rudy  years ago and later Swingers—recently Favreau has spent time as the executive producer for the Avengers and Iron Man 3—but this project he took full control and it delivered. 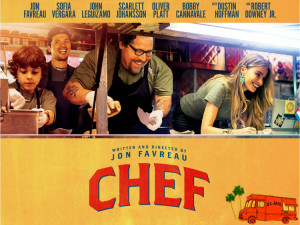 The Chef may be a small budget project but shows how popular Favreau is in Hollywood circles as the supporting cast includes the likes of Dustin Hoffman, Robert Downey Jr and Scarlett Johansson. Its a movie with a little bit of everything on the menu and hits on more than just food (even though the food is spectacular—make sure you eat before you watch this one).

Favreau plays the lead character, Chef Carl Casper who goes from the top of his profession to remodeling his own food truck. Its a good storyline where I like Casper’s character as no matter what comes his way he maintains his passion for his craft. Twitter offers up a nice cameo role, so does a good family plot and a somewhat surprising twist at the end. Go see “The Chef” sure beats one of those Adam Sandler reruns.

NOBODY ASKED ME BUT….Always crazy seeing graduation pictures this time of year. Hard to believe many of my friends have kids who are picking up diplomas from high school when I vividly remember our days in high school together ?! Its an exciting time of your life but one full of unknowns for many who wonder how college will be or what their future will hold. 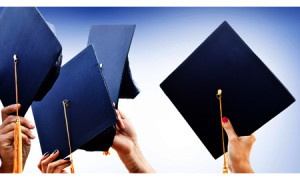 My advice—enjoy every minute of it. The key to life is doing something you enjoy, so spend the next four (or sometimes five) years figuring out what career will make you the happiest. Along the way take some risks and don’t allow some of the professors who have never been in the real world to break your spirits. Its important to spend your days doing something you enjoy, you only get one shot graduates…make the most of it!