The great thing about being a parent is you discover you can immediately love someone much more than yourself.

The perfect example is those birthdays, where over the years, I easily had taken much more enjoyment celebrating my daughters’ big days than mine. It was a no contest. Frankly, miss planning the now outdated bouncy house bashes and endless slumber parties…..such great times that go by much too fast.

The two worlds collided this year on my birthday dinner though. When the check arrived and I reached for my bill,  my youngest daughter Ally put her hand on mine to allow my oldest daughter Morgan the opportunity to pay for Dad’s dinner—a moment that made my day.

For an encore, Morgan arranged for the waitress to bring a dessert where I thought it was interesting (and fitting) this birthday had “two” candles on top.

Having two candles was ironic because this birthday involved two much bigger concerns. It surrounded an old friend and the citizens of my home away from home.

Like you, we’ve all witnessed the unpredictability of COVID over the past two years. While my daughter was diagnosed with it a year ago, she along with many others I knew had a mild case. I’ve had a handful of friends who delivered us all scary moments but I hadn’t been close to anyone who lost their life in these unfathomable times.

This all changed when I lost my dear friend Joel Hartley. It hit me hard on so many levels. First and foremost, he was only 49 years old and passed away “the day after” his 49th birthday.  Secondly, he was fully vaccinated which leaves you frustrated wondering why it happened and when we will ever solve this colossal conundrum of a pandemic?

Joel was more than a friend, he was family and like family, it’s hard to comprehend not being able to pick up a phone and call him anymore. He was my videographer on hundreds of shoots where there was a stretch we did an insane amount of work together all over the country—from Gainesville to Chicago to London and all points in between. Nobody was more dependable than my man Hartley. No one cared more about getting it right.

His passing leaves a void for me and many others who were impacted by his work ethic, his selfless manner, and his smart-ass sense of humor. It also is a reminder while many make COVID political, there should be no debate on how catastrophic it is to so many. Losing Joel Hartley made me feel deeply for his family and gave me a greater appreciation of the emotions of many families and friends who have lost those so close to them during these times.

COVID has randomly given many of us pause, so have hurricanes over the years. 16 years ago, Hurricane Katrina changed the city of New Orleans forever. I remember celebrating my 37th birthday with my late mother and father and watching the TV reports of how it was tearing apart the Big Easy bit by bit.

I would have never guessed a year later, I would be covering the New Orleans Saints and would do so the next 16 years. In that time, I have gathered a great appreciation for what the city went through that day and in the process developed some of my best friends and co-workers from New Orleans and its neighboring gulf coast region.

I was supposed to fly into New Orleans for work the day before it arrived, but with Hurricane Ida looming, I  canceled my flight. For the next few days, it’s was tough knowing exactly 16 years after Katrina, Ida had the potential of being even worse for so many who I have become close to.

Thankfully my friends, their families, and their homes are mostly ok even though they are still battling the seemingly endless loss of power.

Watching this unfold and losing my brother Joel Hartley hit home while serving as a powerful reminder. Often we hear stories about COVID or may watch images of a myriad of natural disasters from afar— yet never truly absorb it unless it hits those close to us. Many struggle daily with these emotions.

When I was at my birthday dinner with my two beautiful daughters this year, I had gratitude for the special moment but saw an opportunity with those two candles which were randomly delivered at the end of the meal. For once I didn’t make a birthday wish for myself, this one was much more satisfying.

I wished for two things—my man Joel Hartley will rest in piece knowing how much he is missed and loved and all my buddies in New Orleans will be safe and sound….now let’s all pray they get power and normalcy back soon.

Hartley and Hurricanes …..the first focus in another lap around the Naborhood, as always, thanks for stopping by:

FOOTBALL PICKS: No one on this planet may have looked forward to college football season more than my buddy Hartley who took Gator losses harder than I’m guessing even some of the players. Tis another season and with it brings a lot of suspense or doesn’t it?

In the NFL it’s hard on paper to pick against a Super Bowl rematch between the Bucs and Saints and on the college level it’s hard to pick against the usual suspects of Alabama, Clemson, Georgia and Ohio State.

I wanted to go against the grain this year but it’s tough. The Bucs return everybody and it’s hard to imagine they will get complacent with Tom Brady constantly keeping them in line. The Chiefs are loaded too and have better protection for Patrick Mahomes than that injured o-line provided in last season;s Super Bowl. I see the same game but the Chiefs win this time around.

As for college, ole Nick Saban can lose everybody (even his coaches) and seemingly contend year after year. It’s hard to imagine there will ever be a coach who can accomplish the things he has. I do think while Saban will have Bama ready, this is the year Georgia and Kirby Smart finally outsmart everybody. He has a quarterback in JT Daniels to complement his string of great recruiting classes. Smart becomes the first Saban assistant to beat Saban and then win it all beating Ohio State in this year’s championship.

TOP CAMPUS: This summer I had a great west coast college tour with my youngest Ally. We looked at some beautiful campuses but our favorite was arguably the most picturesque in the country, Stanford. I have been to most of the major campuses for my work and while I still may give the edge to the University of Colorado in Boulder, Stanford was so impressive.

This summer Travel and Leisure did a survey on the most beautiful campuses and Stanford was the winner followed by Berry College in Georgia, Notre Dame and a hidden gym Florida Southern College in Lakeland. 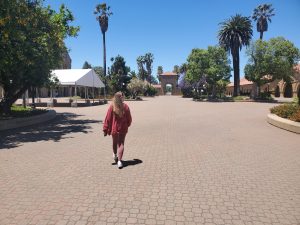 Describing Stanford, the publication pointed out the highlights which are tremendous: “the entryway to Stanford’s 8,180-acre campus is arguably the grandest of any college campus: A mile-long, tree-lined Palm Drive leads up to the expansive green oval Main Quad, surrounded by red-roofed buildings and the campus’s crown architectural jewel, Memorial Church, with its striking mosaic façade. Beauty continues at the Cantor Arts Center’s collection of 170 bronzes by Auguste Rodin, one of the largest beyond Paris. The view of campus – and all the way to San Francisco on a clear day – is best captured from the Hoover Tower observation platform.

An added bonus for Ally and me was the great Stanford book store, a destination we look forward to hitting at every stop. Stanford was self-aware embracing their elite academic standing with a collection of great “nerd” wear….

I appreciate anyone who can laugh at themselves, nice work Stanford–and of course I bought the “nerd” hat.

NOBODY ASKED ME, BUT: I don’t watch a lot of TV but took in a pair of revealing documentaries about two remarkable talents whose careers took different turns for two different reasons.

“Val” was an interesting and exceedingly vulnerable look at the life of Val Kilmer. One of the best actors of his generation, Kilmer’s passion for his craft was evident from his childhood as this doc is a collection of videos of his life dating back to this childhood and then progressing to an interesting behind the scenes look at many of his biggest films such as The Doors, Tombstone and Top Gun.

Six years ago, Kilmer was diagnosed with throat cancer. As a result, has to use a voice box to speak and eats through a feeding tube. This doc profiles the struggles in his life and is narrated by his son Jack. It addresses the rumors Kilmer was tough to work with but also shows an actor who really appreciated his craft. It’s such a shame, he can’t continue to follow his passion for acting as he was such an elite actor but you gain a great appreciation of his life and the enthusiasm in which he continues to live it.

Another revealing doc was Showtime’s “Belishi’ a deeper dive into the life of an actor which is hard to believe left us at the age of 33. Belushi’s life was portrayed in a way I had never seen by director R.J. Cutler with never-before-seen photos, letters and home-movies give intimate access to the world-famous superstar. Family and friends who knew him best share intimate memories, including Dan Aykroyd, Gilda Radner, Chevy Chase, Penny Marshall, Lorne Michaels and Harold Ramis.

It gave you another side of one of the most talented comedic actors our country has seen and like Kilmer made you sad thinking all of the work they could have done, tragic for different reasons.

EXTRA POINT: It was great to see the many tributes to the late Bobby Bowden, so well deserved.

I reflected my thoughts on him in my previous blog but a true testament to Bowden’slegacy was the many stories I heard from media members on how they were treated by the legendary coach—he was the same whether you were in a small media market or on ESPN. There will never be another one like him.