No matter how young you still may feel, there are reminders that time is flying. 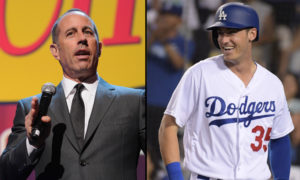 Well to quote the man himself–“Not that there is anything wrong with that?”

Ok, Seinfeld was off the air before Cory’s 5th birthday party–so we’ll let this one pass–just another reality check though.

How bout another one….

Recently I had lunch with someone who graduated from high school in 2007 and is attending his tenth year reunion this summer.

I know the older you are, the faster those decades fly by, but the last 10 years have been ridiculous.

It was ten years ago– June 29,2007, the Iphone was released and our society was turned upside down. 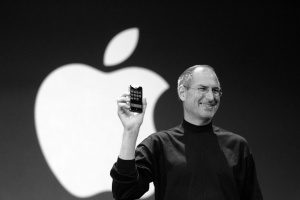 Think about all the things we can do now, we couldn’t do only ten years ago:

No cellphone pics,–certainly no instant video–couldn’t Facetime and social media was just getting off the ground?

Maybe we were better off ten years ago?! Kidding….kinda.

Yes a decade ago, we talked more, read the newspaper more and didn’t take nearly as many pictures.

Ten years flies by after your teenage years but in my lifetime I’ve never seen as many changes as we’ve seen the past decade—makes you wonder what we will all be like in 2027…..

The ten year itch, the first thought of many in another jog around the Hood—as always thanks for stopping by.

SUMMER JOBS?! Don’t know about you but growing up, I always had a summer job. Cutting grass was big for awhile but that turned into working at grocery stores, being a lifeguard and then a lot of internships, some paid–some not so much.

Recent numbers in an article by the Associated Press show a big drop off in kids working summer jobs. 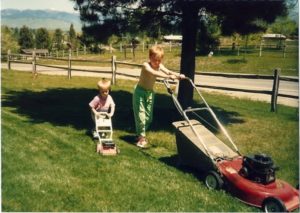 How about this–almost thirty one years ago, in July of 1986, 57 percent of Americans ages 16 to 19 were employed. The proportion stayed over 50 percent until 2002 when it began dropping steadily. By last July, only 36 percent were working.

The studies show that kids aren’t necessary lazy, they’re just more inclined to take more classes than getting a summer job. Some are volunteering while many high schoolers are preparing to getting into what is a much more competitive college admissions race. 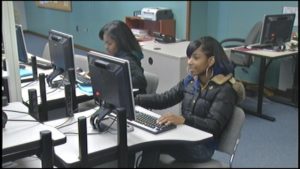 In July 1986, just 12 percent of Americans ages 16 to 19 were taking summer classes. Thirty years later, the share had risen to 42 percent.

My take, you gotta have a balance. Study some in the summer but also work a little–it won’t hurt you. Juggling both will help you better juggle life in the coming years.

ESPN KEEPERS: Sadly, it seems my world of sports broadcast journalism is losing another familiar face every week. While it’s hitting every medium, those ESPN VIP’s are getting most of the attention. It got me thinking, there are still many viable options at the World Wide Leader so here’s( in my opinion) the entities and the people, ESPN should hold on tight to and not deliver a pink slip in the coming months and years…

(1) Pardon The Interruption: I feel this is arguably the best produced half hour show in sports journalism history. Hosts Tony Kornheiser and Michael Wilbon have a special chemistry where they combine for a perfect blend of debate while showing off both serious and humorous takes. Love how the show moves and you can keep up with every second via it’s graphic rundown. PTI, you’re a keeper. 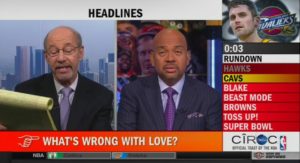 (2) 30 for 30’s–this is ESPN at it’s finest. I’ve seen every one of these documentaries, many which have carried over in different forms to the SEC Network. The latest on the Celtics/Lakers rivalry proved the series hasn’t lost it’s fastball as they give you much more than those obvious storylines.

(3) Scott Van Pelt—while ESPN has lost a lot of big talent over the years, Van Pelt is as versatile and as talented as they come. He is a great interviewer, witty but also thoughtful and not afraid to put himself out there.

(4) Bob Ley—one of those Mt Rushmore ESPN anchors along with Berman, Patrick and Olberman, the General gives the network more credibility than anyone and is the definition of a sports journalist. 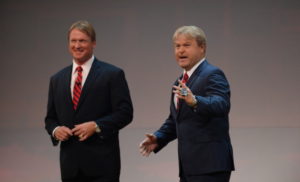 (5) Frank Caliendo—I know the multitalented impersonator would survive without his ESPN checks but his contributions would be missed. The man can do everyone from Screamin A Smith to Ron Jaworski to his spot on Jon Gruden–gotta keep Frank around.

DRAFT DILEMMAS: I have an easy way to fix those college drafts. OK, we leave the NFL version alone, they know what they’re doing and love how they have made it better by rotating the sites–but we need to help out MLB and the NBA, they have no idea what they’re doing.

Let’s start with our baseball friends, please stop holding you’re draft during the height of your biggest college sporting event?  The NFL doesn’t draft players during the bowl season, the NBA doesn’t select it’s top prospects during the Final Four–so why are you drafting your players during the College World Series? 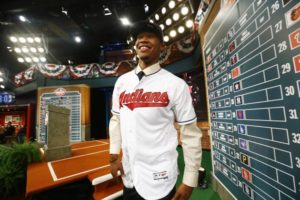 It puts unnecessary pressure on the kids and as a result effects their teams. You could easily hold you’re draft in early July and save a lot of tension for everyone. 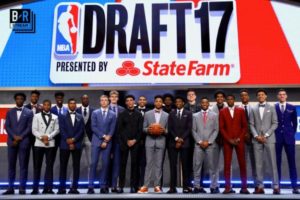 But baseball, I will say this—once you draft players, you have it all down pat where your basketball buddies should take notice. Hey NBA you could kill two birds with one stone by adopting baseball’s policy of letting kids go to the pro’s out of high school and if they don’t choose to—they must stay in college at least three years. I’ll even say it only has to be two years. but c’mon the one and done template is ruining both the NBA and college hoops where I’ll admit in the recent draft, I hadn’t heard of the majority of the lottery picks.

MY FAVORITE MARTIN: Speaking of college baseball, I know the sporting God’s have finally forgiven the Cubbies and Red Sox but where is the love for FSU’s Mike Martin?

No man should have to have put up with as much as the legendary Seminole baseball coach. Martin will become the NCAA’s all time winningest baseball coach next season–this after leading FSU to an unbelievable 38 straight trips to the NCAA , which is the longest active streak in the country.  His Noles have won seven ACC Tournament Championships and last but certainly not least, enjoyed 16 trips to Omaha. 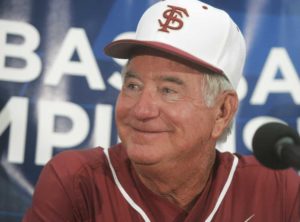 Hardly a sweet 16, Martin shockingly has never won the big one.

I covered Martin when I worked in Tallahassee and you won’t find a nicer and more accessible Head Coach. He will remember your name after you’ve only met him once. One time he came on my Sunday night show with a tie and a smile after coaching a game that afternoon.

At 73 years of age the clock is ticking and I’m hoping those baseball gods will reward him, he’s waited long enough.

HE CAN BE SERIOUS: Ok, we need to push this folks–with all the sports shows out there, please make room for a debate show with John McEnroe and Charles Barkley.

Talk about birds of a feather.

Both men will say anything and the best part is they never shy away from the criticism that follows—this is rare.

Recently, McEnroe is on the hot seat saying that while Serena Williams is special, she would be the 700th ranked men’s player. Even though, I think that’s reaching and while I would love to find out how she would do, I respect McEnroe for saying what many people believe and then not backing off.

NOBODY ASKED ME, BUT….We have lost a lot of stars from the music world and the big screen the past year and a half, but some just hit you differently. This month actor Stephen Furst passed at the age of 63. Furst was an actor for several years but is best known for playing this legend….. 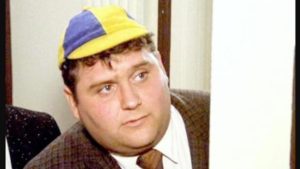 The one and the only  “Flounder” of Animal House. Furst entered the Delta House as Kent Dorfman but stole so many scenes from this classic. Who could forget the awkward  line “Are you guys playing cards?” Life wouldn’t get better for our man Flounder who would tragically and accidentally shoot a horse then at the end of the day have to face the music to Dean Wormer who told him, “Fat drunk and stupid is no way to go through life son.”

Flounder was all of the above and we loved him for it. While Furst may have showed better acting chops by playing Dr Elliot Axelrod in St Elsewhere for much of the eighties, he will always be Flounder to me.

EXTRA POINT: The Gators win their first baseball championship where they now join UCLA, Stanford, Cal, Michigan and Ohio State as the sixth school to win at least one football, basketball and baseball title. Amazingly, they are the only SEC school to do it.