I can see it now—it will be the year 2035 or so and I picture myself a grandfather. I imagine sitting out on my back porch telling my eldest grandchild how it worked back in the day or better yet how it didn’t work–where it was hardly the good ole days.

My grandchild will ask ” Why did we put up with the BCS for so long Grandaddy?” I will tell he or she that college presidents and something called the NCAA (hope its banished by then)–loved this crazy bowl system and for years many teams who could and should have played for National Titles sat on the sidelines while many of the college coaches even agreed with the inane process. 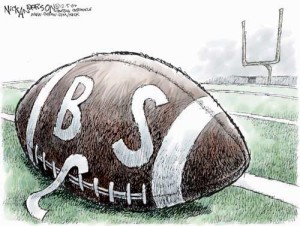 Yeah this year is it folks—our last year of dealing with the BCS Mess. An outdated system which seems to be the equivalent of that one relative which ruins the family holiday get together each December. Help is on the way and it can’t come soon enough.

In the meantime and as a result, the college football world has taken to finger pointing.

Many are blaming Nick Saban—which I find ridiculous, I had no problem with his late maneuvering against Auburn.He makes that field goal he’s a genius, he doesn’t and its easy to second guess.

Many are blaming Ohio St and FSU‘s pathetic schedules while some ACC and Big Ten loyalists enjoy throwing daggers at the SEC for being overrated, which is laughable. I do think the winner of the SEC Championship game would beat OSU but OSU deserves to be in the game because that’s the way this silly system is setup…..

If we didn’t have it, things certainly wouldn’t be perfect (I prefer an 8 team playoff) but a four team playoff would solve most of our problems. We could give FSU & OSU a real semifinal test to prove they deserve a shot at the National Title game—something one day my grandkids will consider the norm.

Soon we will put it out of its misery—-waiting till next year never sounded so sweet. Hating on the BCS—the first of many opinions in this stroll around the Naborhood….

WINSTON CLEARED: The first time I saw FSU Quarterback Jameis Winston play against Pittsburgh, I swore he was too good to be true. The more I saw him play, I kept thinking –when is this freshman gonna act his age?  Down goes Clemson, NC State, Miami and Florida—he never lifted his foot off the gas. You can’t spell Winston without….Wins. Along the way we learned he was gifted, sometimes goofy but would he be guilty?? 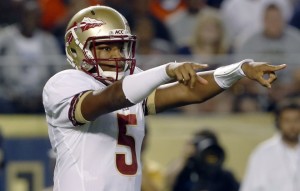 Now we have our answer in a case that paralyzed not only FSU fans but the world of college football for the better part of a month. Now we can deliver Winston his Heisman and likely give the Noles an ACC and likely its third National Championship—its amazing to me how Winston kept on Winning despite all the distractions—the kid has a lot of poise to go along with all that talent.

But the FSU Quarterback is hardly the whole story here. I love sports as much as anybody, well maybe not everybody–sometimes I need to come up for air. This case still has more than a few holes and questions which only Winston and his accuser will ever be able to answer. Because of that and the bumbling of the Mayberry Cops in Tallahassee–some will always doubt Winston’s character and that’s unfortunate. Speaking of Tallahassee, could State prosecutor Willie Meggs please stop laughing during his press conferences—none of this is funny.

Over the past month it seems many fans, who had NO idea– just presumed Winson’s innocence and that can often be dangerous. So many times in these sexual assault cases, the victims are overlooked because people have their priorities out of whack–this case was the perfect well, case study in that department. Sure, sometimes the accusers are certainly looking for attention but often these cases have so many layers that its hard to prove anything. This case is closed, Winston is ruled innocent of any chargers but it has its share of fallout. Next time something like this happens with a big name athlete, how about we let things play out, instead of just putting a premium on whether the star quarterback is losing hold of a Heisman–a trophy which is low on a priority list when talking about the potential welfare of a young college student. This time he is cleared but every case is different….

C’MON …..MIKE? I have always had great respect for Pittsburgh Coach Mike Tomlin but I lost some over the weekend when he lost his mind for a few seconds. Against the Ravens, on Thanksgiving, Turkey Tomlin “says” he was gazing at the jumbotron when he failed to notice he stepped on to the field and directly in the path of Baltimore return man Jacoby Jones. Please?? 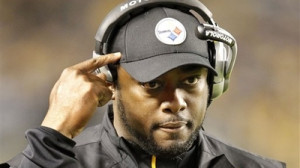 Sorry if you think I’m buying that coach, you must think I believe coaches don’t bend the truth when it comes to  injuries either.  Tomlin’s crossing of the line, surely crossed the line and he deserved the 100,000 fine as the league couldn’t allow him to get away with that. I talked to an old friend of Tomlin’s on Monday night who had no doubt he did it on purpose and he also agreed–the NFL would come down hard– which they did. Regrettable for the Steeler coach and an organization which usually personifies class.

SWEARING: We hear it every day and I would say a lot of us are guilty of using a little profanity now and then–yes that includes me. In my constant effort to bring you unusual surveys–how about this from Atlantic magazine–Which state in our union swears the most? Their findings were a result of the Marchex Institute who gathered over 600,000 phone calls from the past year placed by consumers to businesses across 30 different industries. Remember when you talk to these people they say “these conversations will be recorded.” —they’re not kidding folks.

The results–well just like the presidential election the state of Ohio is the focal point where they lead the way with the most potty mouths. According to the survey, they swore in one out of about every 150 phone conversations. Actually thought that wasn’t bad?? Rounding out your top five would be Maryland, New Jersey, Louisiana, and Illinois.

Who swore the least?? How about our friends up in the great Northwest in the state of Washington. They apparently swore once in every 300 conversations or half as much as Ohioans! Somebody give our friends in Ohio a hug….

Finally, a survey where my home state of Florida doesn’t come out as a national embarrassment. Holy ##@@**&&!!!

GLADWELL’S GOLIATH: Wanted to pass on another endorsement from one of my favorite authors– Malcolm Gladwell. Loved Outliers and The Tipping Point—well he scores again in David and Goliath. All of his books are very easy reads where this one plays off the biblical tale of the underdog outsmarting the heavy favorite.

Gladwell’s strength is finding real life stories to prove his point over and over again. His selling point this time around  are those Underdogs, Misfits who he proves win more than you think when battling the giants of the world. Its a book that tackles misnomers about school class size, children of wealth, and even Ivy League educations just to name a few examples.

You really learn a lot in his books which always shy away from conventional thinking. A fascinating part of this Gladwell offering was the success of many people who suffer from Dyslexia. Gladwell shows how this disability  has helped many become very successful in a number of arenas. His point in several examples–many who succeed are successful because they had to endure a hardship while many who float through life don’t become as accomplished because they haven’t had to work though a setback. An interesting and highly recommended read…

PARKING PROBLEMS: Seattle is one of my favorite cities. Its beautiful and has a great downtown area highlighted by the Pike Place Market which is chock full of great food, shops and scenery not to mention the very first Starbucks.

Its football field, CenturyLink Field is one of the nicest in the league and definitely the loudest as I was there Monday against the Saints where they set a new Guinness World Record for decibel levels. The 137.6 decibel reading was the loudest ever for an outdoor stadium—no argument here.

My only issue with Seattle—how about parking. Check out what they charge for parking right outside of the stadium: 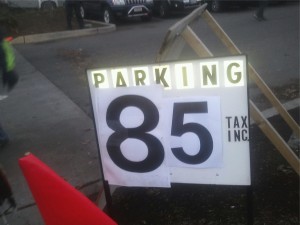 Yeah not 30, not 50—how about 85 dollars for parking across the street for the Monday Night Football game?!  Hey tax included though….I’ve never seen it higher–wondering if anybody out there has?? By the way the parking lot was packed and a lot of cars were double parked—not a bad day at the a parking office.

NOBODY ASKED ME BUT: I haven’t opened any of my Christmas presents but have already received my best one. It was a letter from my youngest daughter Ally. She always keeps us guessing and surprised me once again with a letter from school on why she is Thankful for her daddy. The highlight—well Ally said I’m hardworking because “when you go on a trip, I think you get at least 500 dollars or more and you give it to my Mom so she can spend it on stuff that does not cost an arm and a leg.” I love little girls and wish she would stay 8 years old forever…..

EXTRA POINT: Oh those Yankees trying to buy another pennant—throwing money at the likes of Brian McCann and drastically overpaying for Jacoby Ellsbury. More fuel to the Rays fire and just another example of why Major League Baseball is second to the BCS when it comes to the most dysfunction in the sports world. To bring this whole blog full circle–how great would it be to have a college playoff AND a salary cap in the Big Leagues—talk about a sports nirvanna.