No matter how much older I get, not sure I’ll ever get used to it?

At the grocery store the young clerk says “Thank you SIR,” ???

Recently bought a car and the salesman, who could be my father says— “Great choice SIR”???

Young athletes I cover even call me SIR then I realize these guys were born in the 90’s after I graduated from …..COLLEGE.

That one always stings a bit.

I’m 45 but in my mind am still very much 25. Not sure when this feeling will leave me but hopefully it never does. Maybe I need to start acting my age —but who really wants to do that?

Still the reminders are everywhere.

The latest example–how bout  a recent trip to Gainesville where at halftime of the Florida/LSU game they honored the first team I ever covered as a young collegiate wanna be sportscaster—the 1989 Florida Basketball team. They were remarkably the first SEC basketball champs in school history. 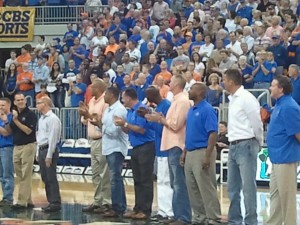 Watching them at halftime, it hit me—THEY ARE OLD…which means I AM OLD!  Now I know how my Dad felt when he used to see players he rooted for reach their senior years and he would shake his head.

I found myself shaking mine at the likes of  Livingston Chatman, Brian Hogan and Renaldo Garcia. They were hardly the guys I just saw in the 1st half running all over the court—those current Gators were all born AFTER these Gators won the SEC.

Age is just a number though–not sure I ever want to stop working and getting these reminders are merely reality checks. Its what you do with your reality that matters.

Getting older the first of many topics as we  dribble around the NABORHOOD—-thank you SIR’s and MAAM’s for stopping by…..

BILLY BALL: Many coaches these days are tough to like. Several are overly paranoid, while others are extremely guarded but there are a few exceptions. You have the Rays’ Joe Maddon and then you have the Gators’ Billy Donovan. I’ve covered Billy  since he took over in Gainesville back in the mid-nineties and he hasn’t changed at all—even though his stature and apperance has.

Donovan may be coaching the Gators well into his 60’s but I will always picture him as the 30 year old Florida kid they hired back in 1996. I remember anchoring local news in Tallahassee that day and kidding with my co-anchor, who was in his 50’s at the time, “What were you doing when you were 30?”

Since then Donovan has surpassed the likes of Bowden and Spurrier as the most successful college coach the Sunshine State has ever seen and the crazy part —he continues to pad his stats. 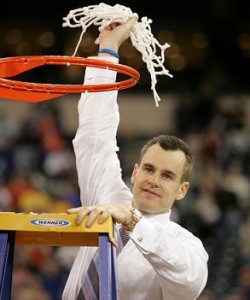 Many foolishly thought Donovan peaked when he won back to back National Championships but after three straight trips to the Elite Eight—Billy’s Boys now are fresh off the best regular season in Gator and SEC History with an unprecedented 18 straight victories. He admits its “the best regular season, he’s ever been a part of.” That surely is saying something.

The great thing about this team is they did it by dunking the modern one and done formula. No superstar freshman playing for these Gators—instead they are led by four seniors who aren’t top flight NBA prospects. It must drive the Kentucky’s of the world crazy as they continue to pile on the McDonald All American’s each year–while Donovan passes them in the drive thru lane with a real “team” full of players he continues to get the most out of.

Donovan is a great coach and great with the media. I’ve never seen him snap at a question and even though some questions may be better than others—Billy always gives you a thoughtful answer. He also has the talent of being brutally honest but not in a Jim Boeheim demeaning way. He can be candid it comes to his team and his guys but not come across as condescending—-that is rare in this day and age.

DEFENDING ST LOUIS: Its been a crazy week for the fan base of the Tampa Bay Lightning who said goodbye to the best player in franchise history in one Marty St Louis . The captain was an easy target for criticism  but  I believe much of it is shortsighted from Bolt fans along with selected members of the media.

Sure St Louis left the team in the heart of a playoff run and appeared oversensitive about initially being left off the Olympic Team by his own GM Steve Izerman who runs Team Canada, but I believe there is MUCH more to the story than that. Listening to Marty’s comments after the move was made—you hear St Louis say two things—he didn’t believe he would play this long and his family was a big motivation for requesting a trade to New York . 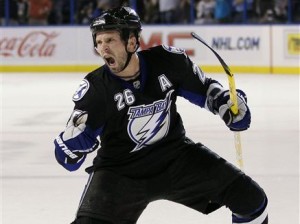 Looking closer at those comments you have some non hockey possibilities.  St Louis’ wife is from Connecticut and maybe wants her family around while she is raising three boys while her husband is skating around the country?? I don’t care how much money you have–watching three boys isn’t easy. In addition, Marty is pushing 40 but is still scoring around 30 goals a year which seems to surprise even Marty—maybe he told his wife years ago—I’ll be out of this game soon, but it didn’t work out that way??

There are always much more to these stories than meets the eye. Could he and Izerman have handled the Olympic situation differently?? Absolutely. But for many to say his departure tarnishes his Lightning legacy forever is ridiculous. Many should consider there is more to some of these athletes’ lives than just athletics?? Besides Derrick Brooks and Warren Sapp, you can argue St Louis is the biggest name in the history of Tampa Bay sports—you don’t lose that overnight.

SABAN”METRICS“: After dominating the college football landscape for years, its been a tough past few months for Nick Saban. You had the Auburn debacle then the Bowl blowout to Oklahoma and now the so called “Saban rule” was tabled by the NCAA’s 11 member playing rules oversight committee.

Also known as “the 10 second rule” it aims to slow down today’s trendy no huddle, hurry up offenses by allowing defenses 10 seconds for substitutions each time the 40 second play clock resets, except during the last two minutes of each half. 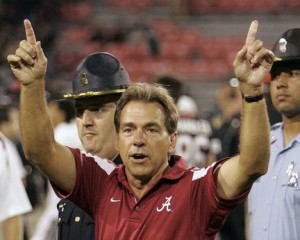 Many old school defensive minded coaches back Saban’s notion that these new aged offenses put today’s defensive players at risk and are the reason we are seeing more injuries.

But coaches like Fresno State’s Tim DeRuyter, whose Bulldogs ran a whopping 1,088 plays in 13 games (83.7 per contest) last season, say coaches who backed the rule change just wanted to prevent up-tempo offenses from playing so fast.

The stats and the line drawn in both arguments back that notion up.

I agree with the offensive guys on this one and have to disagree with Saban—until there is more proven research that these defensive players are in danger—-let’s just keep things the way they are. You pass this rule it greatly alters the game plan for some of the best offenses in the country WITHOUT any proof this its necessary and that makes no sense.

Another rare defeat for Saban who is gonna have to further gameplan to catch up with the times.

SEASON OF CHANGE: Change is hard on all of us but this time of year it dominates the NFL. You of course have teams cutting players and cap space for another round of free agency. How much do we crave and subsequently miss the NFL?? The proof is in all the headlines the new Buccaneers’ threads received the past few weeks.

Talk about overblown— it was funny to me how social media seemed to control how many felt about the Bucs recent uniform change. Everybody hated them, then sorta of like them and then agreed they were pretty good. Personally, the new look is still growing on me as I liked the pewter getup but I don’t hate these as much as some do. 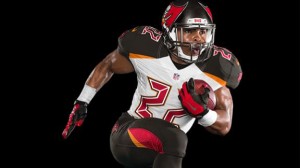 I see the XFL comparisons but were uniforms what was really wrong with the XFL? What was truly wrong with that league was Vince McMahon, some quirky rules and lack of star power.

OK maybe Bucco Bruce (wink) is a little outdated, but I would like them to incorporated those sweet creamsickle colors into a modern scheme. Those Hugh Culverhouse days and payrolls are long gone—can’t we bring some of the old flavor back?? I think the Bucs fan base would buy the gear in droves.

NOBODY ASKED ME BUT….One of my favorite movies of all time is Broadcast News. It debuted in 1987 where even back then I knew I wanted to be a broadcaster —the movie really increased my interest. Over the weekend, I saw it again for probably the first time in 20 years and it served as great perspective. Like the movie, the real world of Broadcast News is full of overrated anchors (William Hurt) underrated reporters (Albert Brooks) and talented yet high strung producers (Holly Hunter). 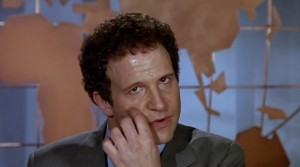 The movie was as good as I rememberd it. After all these years it proves, like any other profession, there are certain– certainties. You have your unfair promotions, your bitter employees and your certain kiss ups in any newsroom. They say sometimes Hollywood makes things unrealistic and that’s often true but 27 years later and 23 year into my Broadcast News career, I believe the movie got a lot more right than wrong.

EXTRA POINT: With NFL free agency kicking off, many have pondered the thought of the Saints dealing superstar tight end (yes tight end) Jimmy Graham for a pair of 1st round picks. I would do that in a heartbeat! Not many players command that kind of trade value , save your franchise QB’s. Top it off with this draft arguably being the deepest of all time and those picks suddenly become even more valuable. If its on the table New Orleans—do it!